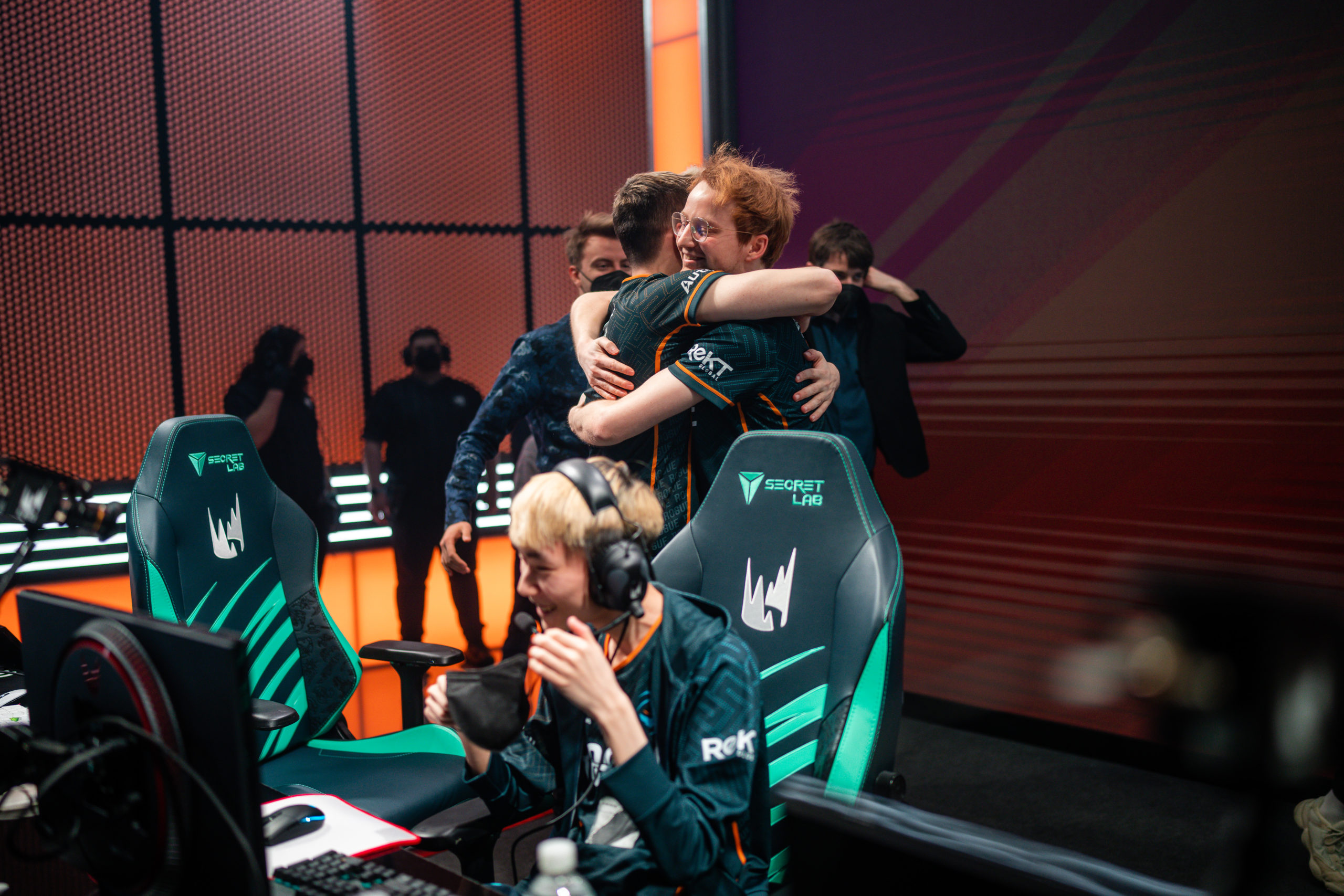 After their first reverse sweep in the LEC playoffs, Rogue secured their spot in the 2022 LEC Spring Split Finals 3-2, breaking Fnatic’s 2-0 lead that seemed bound to give them a spot in the finals.

European League of Legends fans tuned in for today’s LEC upper bracket final between Rogue and Fnatic—the first and second qualified teams of the regular season, respectively. After two games of Fnatic domination, the stealthy Rogue jumped out of their opponents’ shadows to steal the win with a reverse sweep.

The first game of the series went how most LEC fans thought it would go. Fnatic played aggressively on the bot side of the Rift, gaining substantial advantages in gold and kills early, while Rogue struggled to find beneficial plays despite several good actions from their players. In a back-and-forth game marked by Fnatic’s late-game hesitation and Rogue’s blunders, Fnatic came out on top after 42 minutes, three Barons, and three Elder Drakes captured by the teams. And this was only the beginning of what turned out to be a five-game series.

After almost conceding the first game to Rogue, Fnatic landed on the Rift more confident than before. Building up a steady gold and kill lead on Rogue, Fnatic dominated the second game of the series, showing not only a more refined version of their plan for the first game, but also versatility in overcoming difficult situations. Despite drafting champions that would shine more during a teamfight, each member of Fnatic rose to the occasion, showing LEC fans their technical prowess and aggressive style that stunned Rogue. With a decisive and dominant second game, Fnatic brought themselves to match point.

“After game two, we just said, guys, we can’t do it like this. We have to lose better if we’re going to lose,” Rogue head coach Simon “Fredy” Payne told Dot Esports. “And we just completely changed around. We drafted away more aggressive stuff.” According to the coach, the main focus for the team during game three was the mid lane. Despite a surprising pick and outstanding performance for Malrang on Hecarim, Rogue’s attention was pointed in the mid lane, where they drafted Sylas for Larssen.

By becoming more aggressive, Rogue roared back at Fnatic, reaching the mid stage of the game with a small but growing gold advantage. But Fnatic wouldn’t back down without a fight—especially with a Jinx pick for Upset, who shortly overcame the gold and kill gap set by his opponents in the early stages of the game. In a clash between titans, every blow is decisive and has consequences. If on one hand, Rogue obtained advantages by catching their enemies out of position. On the other hand, Fnatic used Rogue’s blunders to re-balance the situation. In the end, Fnatic’s Nexus crumbled under Rogue’s siege, bringing the score to 2-1.

Game four was Rogue’s playground. A crucial teamfight broke out when both teams were at level one, and Malrang’s presence tipped the scale in Rogue’s favor again. Stealing everything he could from Fnatic’s hands, Malrang’s actions secured at least one kill per minute until the 15-minute mark. The game was totally out of Fnatic’s grasp, who struggled to find flaws in all the clean action their opponents executed during the game. Game four was dominated by Rogue, who ended up with a winning screen in what was the shortest game of the series at a little over 23 minutes, just seconds shorter than the fifth match.

Both teams proved that an early lead was essential to winning the game, and in game five, Rogue seemed to jump on the aggression needed to get ahead in the beginning. Fnatic struggled to come back, mainly due to the lack of early-game damage from the team, and came up short. Rogue widened the gold and kill gap between the two, and when the team secured the first Baron buff at 21 minutes, it was clear Fnatic’s time was running out. They marched against Fnatic’s base, taking down tower after tower and inhibitor after inhibitor until only the exploding Nexus was in front of them.

The first two games were evidence that Fnatic had found a way to shut down Rogue, their aggressive playstyle only nicked by some uncertain steps made in the late stages of the game. Once Rogue matched their level of aggression in the third game and paired it with their methodic style, though, it was difficult for Fnatic to find the formula for victory.

By completing the reverse sweep, Rogue were the first team to lock a spot in the grand final of the LEC Spring Split, securing a chance to finally be crowned LEC champions. On the other side of the bracket, Fnatic will have to wait for tomorrow’s match between G2 Esports and Misfits to know who they will face next week for the last spot in the final.