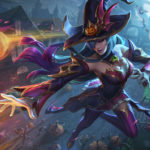 League of Legends fans, it’s time to bow down to your newest Hallow-queens.

Patch 11.20 is bringing some treats for players. Or is it a trick? Five new Bewitching skins will hit the Rift later this patch cycle, just in time for the most frightening night of the year. There will also be a new Prestige Edition for Morgana’s Bewitching skin, which released in 2019.

The five champions receiving brew-tiful new skins are listed below:

With the 2021 World Championship main event just around the corner, Riot isn’t forgetting about the sweets this Halloween. The developer is giving League players skins that are candy for the eye. Pointy hats and fish-like pumpkins flying around are in order for players who want to play with the Little Devil Teemo. Along with demonic swords and books, these new skins will scare your opponents into defeat.

League fans will get the chance to feel twice as wicked with Bewitching Morgana’s newest Prestige Edition, which is also releasing this patch cycle. Additionally, the latest Bewitching skins will arrive in the client store with their own set of chromas that will make players look fa-boo-lous.