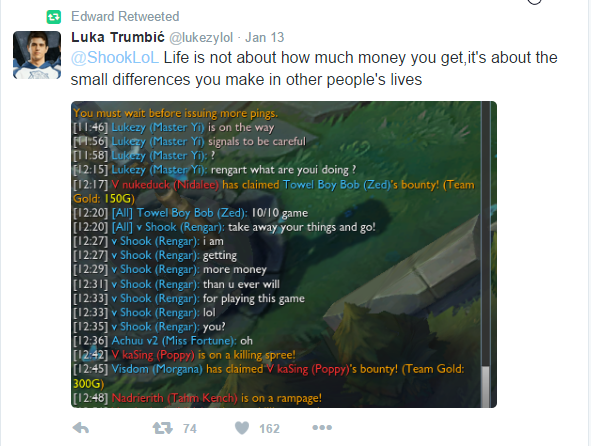 From Edward’s meme-game to opinions on the strength of 6.3 Kog’Maw, GoldPer10 looks at what professional players, eSports personalities and twitter analysts had to say about Week 6 of the LCS:

Edward’s memeing is out of control
While @EdwardCarryLoL may now be benched from Roccat, his Week 6 tweets solidify his place as the true trickster god of League of Legends. Chief among his mischief is this act of twitter necromancy, cheekily retweeting a month old post of Shook flaming in soloqueue in response to his 4/0/11 performance on Lee Sin against Unicorns of Love:

Despite their 2-0 week, Vitality remained the target of Gosu Pepper’s memehammer.  This time using Roccat’s Week 1 victory over the team as evidence for the strength of Taric, citing a 100% win rate:

continuing his campaign, Edward went on to #askdyrus his thoughts on the viability of the Gem Knight:

Not to go unchecked, however, his post was met with some savagery from Vitality support, @kasinglol:

Of course, Edward trolling isn’t the only story of Week 6.3

Patch 6.3 Kog’Maw is BROKEN – with the right team comp

In contrast to @dT_Brokenshard’s understandable vitriol, coach and analyst, @LSXYZ9 looks to 6.3’s iteration of Kog’Maw as a champion with a high skill ceiling:

while coach and analyst, @LeviathanLoL, uses Vitality’s Day 2 match against Unicorns of Love to discuss the necessity of a supporting team composition to get through the mid-game:

But Patch 6.3 is perhaps best summed up by H2k’s coach, @pr0llyLOL:

and @FORG1VENGRE shows his softer side, mourning the loss of Altec:

If you have any tips, tweets or facebook posts you want to see on the next Weekly Twitter Roundup, tag @GoldPer10 or send a link to [email protected]