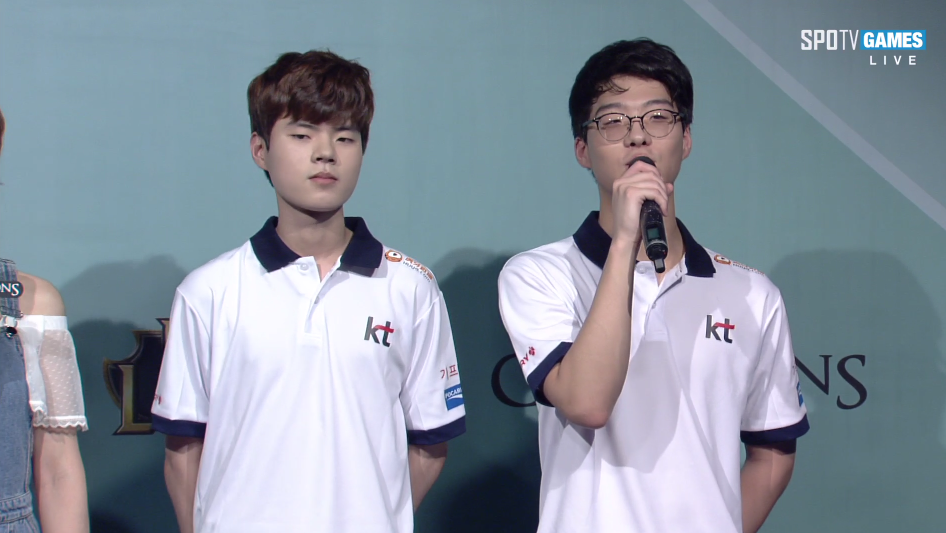 Previously in a threeway tie for first place alongside Longzhu Gaming, KT Rolster and Samsung Galaxy both knew the importance of their match today. A loss would not only have significantly diminished their chances of ending the regular season in first, but also helped their direct competition.

In an attempt to surprise KT, Samsung decided to play jungler Kang “Haru” Min-seung. Although Haru had only played once in Summer, one of the jungler’s best champions in Rengar had once again become viable with the introduction of patch 7.14, and Samsung wanted to make full of use of this.

Drafting a high engage composition with Maokai and Rengar, Samsung looked to abuse lethality for easy picks in game one.

And once Haru completed his Duskblade of Draktharr, the kills started to roll in. With Lee “CuVee” Seong-jin initiating fights as Maokai, Haru was free to assassinate KT mid laner Heo “PawN” Won-seok to no end. KT had no chance to win teamfights as PawN instantly died almost instantly.

Not wanting to deal with any of Samsung’s shenanigans, KT decided to ban three of Samsung’s game one champions—including the Rengar and Maokai.

Without a wild Rengar creating havoc, KT jungler Go “Score” Dong-bin could set the pace for game two. Through smart pathing Score, with the help of his solo laners, found early leads in the bot lane which they beautifully snowballed. Teamfights were all flawless victories for KT, closing out the game almost instantly after they secured the Baron.

Unable to play Rengar once again, Haru and Samsung fell behind in game three too. Score, now on the Maokai had an even easier time procuring leads for his laners. Add in poor positioning by Samsung’s carries, and KT had a field day finding picks. Once KT took the Baron, Samsung could do nothing to prevent their demise. Samsung were nothing but flies waiting to be swatted by KT as their base was torn down.

With Samsung out of the way, KT will start preparation for their match against fellow top team Longzhu Gaming on Aug 1.