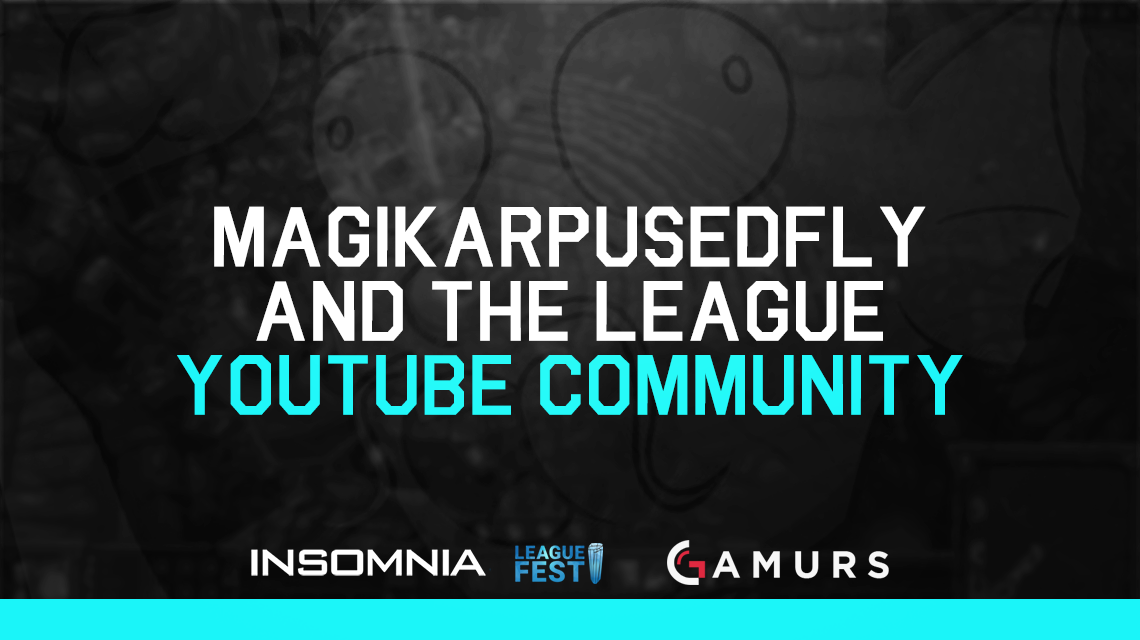 At Insomnia58’s League Fest, I was grateful to be able to sitdown with Matt “MagikarpUsedFly” Castro to talkabout his creative process and stance in the YouTube communitywhere League of Legends is concerned. You can check outhis profile here for all those who don’t know who he is.Below is a word-for-word account of the interview that tookplace.

So tell me, how is it you got into League of Legends in thefirst place when you were starting off on YouTube? Did youexperiment with different things or did you know you wanted to doLeague of Legends videos from the start?

Magikarp: Well initially what happened is thatI didn’t think I would make League videos at all. I used to make alot of videos beforehand, before League of Legends, right? And whenI was making those, when I was having fun and sharing them with myfriends, I decided I was going to try out some gaming contentand the only game I was playing at the time was League of Legends.So, I just started posting funny stuff that I thought was funny andthen I made the Ryze actual championship spotlight, that was theone I actually tried.

When I did the Ryze one, I was just doing it for fun. I thoughtit was funny and then no one liked it. So, I was like, eh,I’ll just do a Soraka one and everyone liked it so I was like, oh,I guess I’ll just keep trying that. It was something that just kindof fell on my lap, it wasn’t that I aimed to make League of Legendscontent, it kind of just happened.

Magikarp: Oh! So, when I was younger, I was areally big fan of the Angry Video Game Nerd (AVGN) James Rolfe. I’ma huge fan of his and I love his whole ranting thing, same thingwith Nostalgia Critic, stuff like that. I like that wholereviewing, ranting type of videos and with League of Legends, Inever saw anything like that where you were ranting about achampion, a parody of it, so that’s why I thought it was a coolthing to do and its the reason I stuck with it because Ithought it would be something people would want to see.

So recently you did a show with Uberdanger about people movingaway from League of Legends. What are your opinions on peoplemoving away from the game and why?

Magikarp: Most of the people that did move awayhad been playing from Beta basically, so when they have beenplaying for five years, that’s a long time to be playing just onevideo game. So when they leave, I think that’s totally fine, as youcan get burnt out on a game. When Keyori left, he said he wasjust not having any fun playing the game, but that does not mean hedidn’t think the game was fun, he was just burnt out from the gameand I think that’s a big difference. It’s not necessarily that thegame is bad, it’s just that people are burnt out from playing itfive years straight. With all the veterans leaving the scene itmeans that new blood can come in.

There’s no point in playing a game if you are not going to haveconstant fun in playing it. A game is made so that you can havefun. I do think it’s perfectly fine when people do leave, Ijust don’t think it’s fine when they leave, but they say that thegame is bad because I think that is just a subjective con. If youare leaving because you feel that the game is bad then it’ssubjective, you can’t just say that you’ve never had fun with thegame or anything like that because, why then would you have playedit for five years if you did not have fun playing it? There is anaspect of fun in it, so I do believe there is an aspect of wordmanipulation when people do leave, but I do believe it is justbecause people are burnt out more than anything.

So, lastly then, why MagikarpUsedFly? How did you come up withthat username?

Magikarp: So, everyone always asks thatquestion, about why MagikarpUsedFly, and everyone always has reallygood answers to why they chose their usernames with a hugebackstory. But for me, it was just about what I thought was funnyand I just chose that, it wasn’t even supposed to be a thing, itjust fell on my lap; I was doing it as a joke. There is no specialreason behind it, I just thought it was a funny name.

And now you are stuck with it.

Magikarp: Yeah, I know I’m stuck with it! It iskind of funny because when I am doing signatures or autographs forpeople, MagiarpUsedFly is such a long name! So, I have toshorten it– I did not think ahead of time when I came up with thatname, yeah…

One last thing. When you started YouTube to now, do you believethere is more of a start-up cost to YouTube as a whole; that youneed to spend a certain amount of money to get into the scene andto be at the standard needed to be a YouTuber?

Magikarp: Yes and no. When I started, everyonewas saying the same thing that you need to get a good microphone,good recording equipment, stuff like that. But when I started, thequality was pretty bad and I was recording my audio on a RazorKraken headset and you know how bad quality those things were. Theywere just garbage, but that’s how I used to make my videos and theydid fine.

I feel as long as you have a creative idea and people understandwhat you’re going for, I think that’s fine.

I do believe there is a little bit of a start-up cost nowadays.I can see what you’re saying by that, it does take a bit more butthere is some equipment that you can get which is pretty cheap.

Thank you very much! That’s all we have time for but thank youfor taking time out of your busy schedule to talk to us. It hasbeen a pleasure!

What do you guys think of our Insomnia/League Fest coverage? Isthere anything else you would like to see us cover in the future?Let us know on twitter @GAMURScom/@MonkeyKingHero and don’t forget to check outMagikarpUsedFly’s YouTube channel for more content!