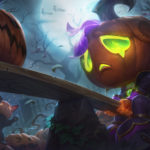 Get your costumes and candy bags ready, League of Legends fans.

Riot Games is dropping this year’s Halloween Terror skins with Patch 10.21 to celebrate the holiday season. The game’s Odyssey skin line will also make its return when the patch hits the live servers later this week, in addition to the newest Hextech skin for Kassadin.

Amumu, Elise, and Fizz are set to receive this year’s batch of Halloween-themed skins. Each skin redesigns the champions into spooky creatures: a sad pumpkin, a spidery witch, and an evil devil. Pumpkin Prince Amumu, Bewitching Elise, and Little Devil Fizz will sell for 1,350 RP each and will remain in the client store for a limited time.

Odyssey is also returning in this patch cycle with five new additions. Karma, Aatrox, Sivir, Kha’Zix, and Twisted Fate will all receive Odyssey skins. Each of the new galactic-themed looks will be available from the store for 1,350 RP and will release alongside a set of chromas for additional purchase.

Patch 10.21 will also feature a new Hextech skin for Kassadin. Fans of the Void Walker can craft the skin using 10 gemstones in the Hextech Crafting tab.

All of the new skins will become available for purchase when Patch 10.21 arrives on the live servers on Oct. 14.