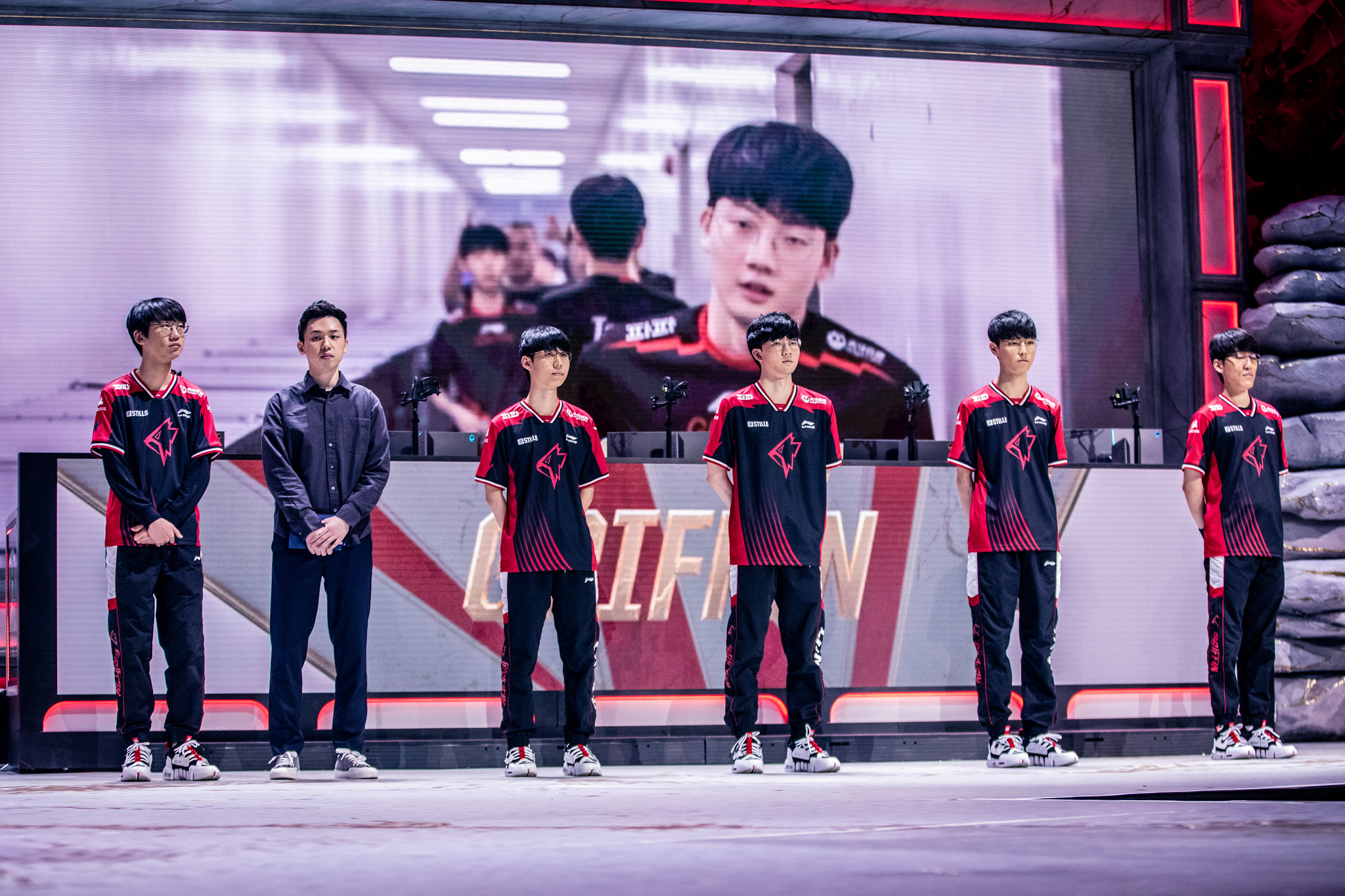 When the 2017 season concluded, the Korean League of Legends scene entered a new era of brilliance. The reign of the SK Telecom T1 family had finally come to an end at the hands of Samsung Galaxy, which opened the floodgates for a select number of challengers to make the climb the following year.

Teams like KT Rolster, Kingzone DragonX, Samsung Galaxy, and Afreeca Freecs lined up to battle for the crown while SKT struggled to find their way in the dark. The perennial world champions fielded a mélange of different players who never really managed to mix. And so, the door was wide open for a new set of kings to sit on the golden throne.

But no one knew that in that next summer, a team full of bright-eyed rookies called Griffin would become a beacon for a new generation of League talent, while almost winning a trophy in their first season in the most competitive region in the world. No one knew that this fiery, young squad wasn’t your average LCK team and that they had some of the region’s next icons. And no one had a clue that after 2019 and 2020, the roster would be one of the biggest “what-ifs” in League’s history.

Related: Griffin’s unraveling and the end of an era for pro League of Legends

Fast forward three years later and every player on that wonder Griffin squad has gone their separate ways. A grave mishandling of management and behind-the-scenes manipulation spelled doom for the League team. But like the mythical creature of the same name, the Griffin players flew high for everyone to see in the time they had while putting the world on watch.

Following the splintering of that would-be dynasty, however, three pieces of the puzzle were quickly thrown into the spotlight: Chovy, Tarzan, and Viper. This trio of stars is poised to lead the League esports scene for years to come. But many people don’t know the disappointments they’ve experienced, the risks they’ve taken, and the lessons they’ve had to learn along the way to build their own roads to greatness.

After his time with Griffin, the team’s mid lane phenom Chovy decided to stay in South Korea to join star AD carry Deft on DRX. Even though he’s one of the best ADCs in League history, Deft has never lifted the Summoner’s Cup. He has eight years of experience at age 25, but the hunger to win a World Championship still drives him to this day and resonates with Chovy.

They might have faltered with DRX in 2020, but the duo stuck together this year and challenged themselves with an up-and-coming organization in Hanwha Life Esports. Their relationship, according to the 20-year-old, has been key to his growth as a pro.

“I’ve never focused on the fact that I’m playing with a veteran player,” Chovy told Dot Esports. “I’ve always wanted to play with Deft, and that’s what mattered to me. Staying next to him, I learned why he was able to keep up such great performances for such a long time. Outside the game, he’s such a nice guy and that’s a big relief for me. Living together with him was always enjoyable.”

Chovy might be a top-five player in the game today, but the road to the show was far from simple. He had to claw through and carry his team up the mountain to Worlds 2021, dragging them from a subpar eighth-place finish in the summer to Worlds contention. This might have been one of the biggest challenges in his career so far, but he believes that “you actually get to perform even better when you are on the cusp of falling down the cliff.”

This year, Chovy found himself stuck looking up at the summit again. Getting through the Worlds 2021 play-ins and group stage was simple enough since the competition wasn’t too fierce. Dispatching a struggling Fnatic and an outmatched PSG Talon ensured them a spot in the knockout stage. But once Hanwha Life jumped into the best-of-fives, they couldn’t escape the looming shadow of Faker, as well as T1’s rising class of rookies. Hanwha Life were swept from the tournament in three games in the quarterfinals, showing Chovy that if he truly wants to “overcome the past to enter the future,” he still has a lot to learn—both individually and as a leader.

“Compared to my first time at Worlds with Griffin, I’ve made a lot of changes to my fundamental skill, the boundaries of my thoughts, my vision, and my insight on the game,” he said. “When I was with Griffin, I never thought that I had a responsibility to play a big role so I felt less pressure, but now, I am far more willing to do more, and I want to keep showing my improvement.”

The burden of leadership and constant failure can easily crush a player as young as Chovy, but this prodigy is dead set on becoming a name that everyone will remember for years to come. He must make a choice this offseason, however, since his contract with Hanwha Life will expire on Nov. 15. One thing is certain, though: An ocean of possibilities awaits him.

Unlike their fellow Griffin teammate on Hanwha Life, both Tarzan and Viper dove into a completely new region for 2021: the LPL. Their destinations, however, were as close to polar opposites as you could get. Tarzan joined a bottom-half organization in LNG Esports, while Viper was scooped up by a consistent championship contender in EDward Gaming.

Even though their new homes might have looked astronomically different, they both had to deal with similar struggles that could drain even the strongest superstar, like language barriers and drastic playstyle differences. But these were all aspects that they considered and they ultimately decided to use these challenges as stepping stones to success.

For the king of the jungle, the road back to Worlds required plenty of mental fortitude. When Tarzan made his decision to join LNG at the end of 2020, he told fans that he wanted to challenge himself in a new region. He was, however, met with plenty of criticism and doubts since LNG posted back-to-back 5-11 records in the 2020 LPL Spring and Summer Splits. Expectations were that he’d never return to the form we’d seen on Griffin.

But now, most people would agree that Tarzan is close to reaching his old form and that he was the primary reason why LNG reached Worlds in the first place. Before the event, he told Korizon Esports’ Ashley Kang that “it is difficult to completely compare himself to the player [he] once was when [he] was good.” But after playing like one of the best junglers at Worlds, it looks like his journey is only just beginning.

On the other side of the standings, Viper also had many adjustments that he needed to deal with, but they too were welcomed with open arms. In fact, he chose to leave the LCK for this exact reason.

Like Tarzan, Viper worried about playing in a foreign region, mainly due to the language difference. But after spending a year in the league, he feels lucky that things clicked together. With the support of his teammates and staff, the young star now thinks “[his] biggest fear from back in the days is the thing that [he takes] care of the least now.”

Viper is the last remaining Griffin graduate left at Worlds 2021 heading into EDG’s first World Championship finals appearance after taking down Gen.G in a true battle of attrition. His explosive, fearless style of play has helped him integrate seamlessly into EDG and into the LPL as a whole. But although he is moving towards his ultimate goal, he still remembers his time with Chovy, Tarzan, and the Griffin squad—even if those memories are slowly waning.

“I can’t really come up with [a favorite memory] right now, but I was obviously so happy to see them again,” he said. “It felt melancholic. I’m seeing them again, but I’m facing them as an opponent. And because of that, even some of my favorite memories have become a lot less vivid because they are my opponents. Those memories are slowly fading out.”

As opposed to Tarzan, Viper is surrounded by multiple veteran stars like Scout and Meiko who are there to anchor the team with their rock-solid individual prowess and knowledge, while being joined by some newer talent like 20-year-old Jiejie. He might be the youngest player in the Worlds 2021 finals, but Jiejie has the potential to become one of the top up-and-coming junglers.

Viper also told Dot Esports that prior to his move to the LPL, he started to have some doubts around how strong he really was as a true carry. But now, he knows he has what it takes to enter the upper echelon of his role.

“I think I have made tremendous improvement throughout the one or two years,” he said. “I was questioning myself about my carry potential, but I think it’s at a decent level that I am satisfied with. In general, I think I have stepped up so much.”

He suggested his individual mechanics, his knowledge of champion matchups, and his general insight toward in-game leadership have all leveled up. Either way, it’s clear that Viper has shed his skin and rapidly evolved into a deadly weapon on Summoner’s Rift. In a region where so many iconic marksmen have risen to legendary status, Viper now has the opportunity to earn himself the title of the LPL’s apex predator when he and EDG face off against the greatest challenge of his career so far: DWG KIA.

You can catch all the action when the 2021 World Championship reaches its exciting climax on Saturday, Nov. 6.