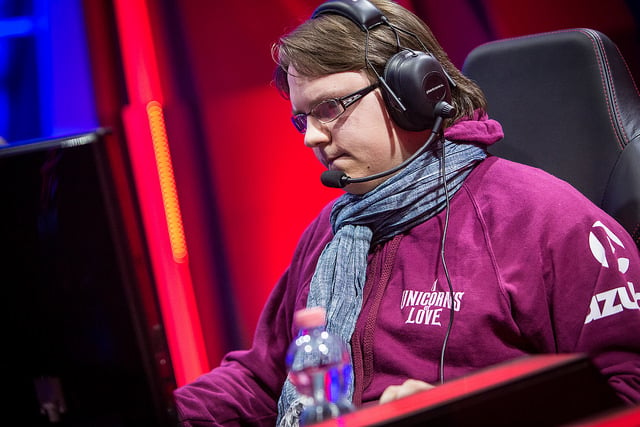 Week six is almost upon us and with the end of the season right around the corner; things are tenser than ever for the LCS squads. Especially with a best of one format, every game matters a huge amount in the long run, especially for teams like H0-2k and Unicorns of Love who didn’t have the best of times last week. The latter team is certainly in a dire situation as the Unicorns have picked up only one win in their last six games. The outlook doesn’t get any better for the horned horses as their week six consists of Origen and H2k, the solidly second and third place teams. If they don’t pull off a miracle fast, we could see them mirror the actions of 2013 NA’s old Good Game University in making a late surge to second in spring playoffs before declining to the relegation zone in summer.

Has the magic run dry?

Both of these teams cannot afford to drop this game.

For SK to have even a slither of hope in making their spring split championship points worth something, they need to start picking up games against teams like Roccat who are playing to stay safe rather than dream of worlds. While the roster and meta change has left them with an identity crisis and without a hard carry to rely on, things have gradually started to look better for what was once EU’s top team.

Roccat on the other hand have been struggling with their identity crisis since the beginning of split where they were once hailed as having “won the preseason” and declared a “top 3 three team” some even going as far as to predict them to sweep the league.

We all make mistakes

But despite the intensity of the under-performance Roccat have displayed up until now, the team looks the best it’s been since season four and with so many other EU teams not at their full potential, it’s a better time than any for Roccat to show up.

I won’t even dare to say “Elements are looking improved” because it seems like every week they roll a dice and decide how their week goes based on that. Except that dice has three sides that say “Lose horrifically” two that say “Bench a player” and one that says “Actually play well”. Which side of the dice are we getting this week? My money is on “Lose horrifically”.

H2k however have a great week to redeem themselves after going 0-2 and should be coming into this game hungrier than ever. Back to back week three and four MVP’s Ryu and KaSing should be on form and ready to lead the team to a 2-0 week, especially considering the performance of the former who was a shining light for the team during a tough week.

I guess the only reason this is a game to watch is because there is that sly one in six chance that the Elements die may land on “Actually play well”.

Every Fnatic game until they lose:

Pretty much in the title, a whopping 10-0 start to the season with what looks to be the strongest Fnatic roster in history and by far the best team in the western world right now. This week shouldn’t really prove to be an issue as Copenhagen Wolves are the “self-destructing team of the split” following on from past examples such as Meet Your Makers and Millenium. Meanwhile Giants have only accumulated wins off of teams that started off the split in pathetic form. It’s been proven that any team in good shape can and will beat Giants. Still, they have a much better chance at winning than the Wolves who look to be starting the week with challenger subs (“Lenny” and “Kaas”) in the top and support positions after the departure announcements of Youngbuck and Unlimited.

Do you believe in the power of dice? I don’t. But there’s a one in six chance I might. There’s also a two in six chance that someone’s getting benched though, so everything’s up in the air.