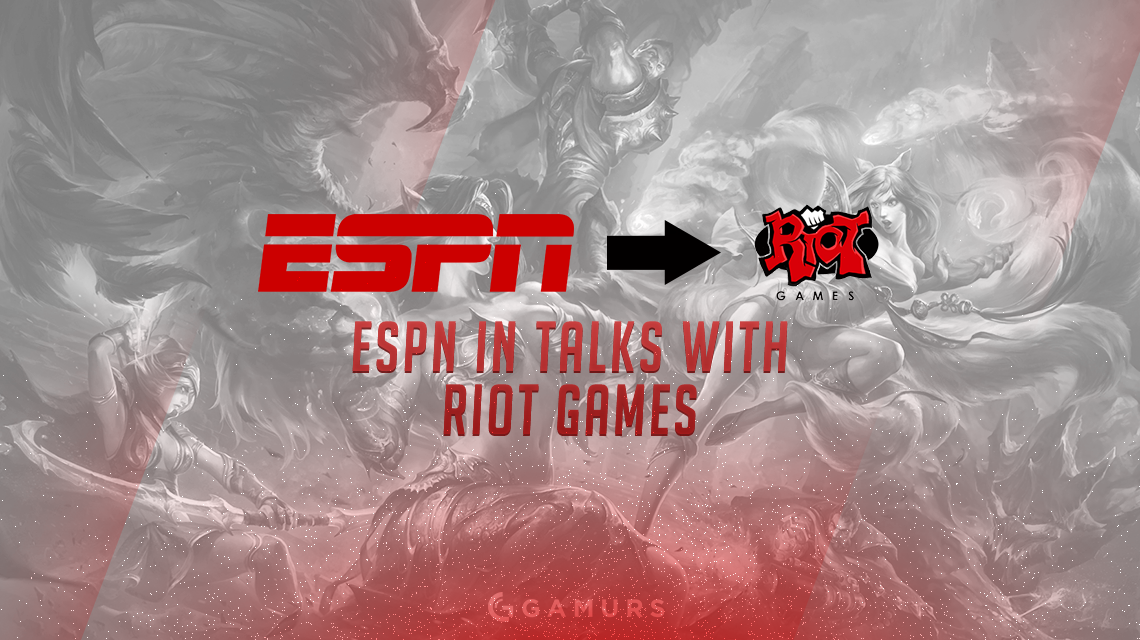 Sources have told PvPLive that sports broadcasting giant ESPN iscurrently in talks with Riot Games to televise the League ofLegends Championship Series (LCS). The deal is estimated to beworth $500 million and it is not specified if the deal includes theEuropean league or the North American league.

The acquisition of broadcast orstreaming rights by a cable company would be a first inLeague ofLegends. Currently,eSports games are broadcast on online platforms like Twitch orAzubu. Recently, Turner Broadcasting partnered with WME/IMG tobring Counter-Strike:Global Offensive to thecable station TBS. ELEAGUE is set to begin May 24.

In the past, League of Legendshas seen viewership numbers that rival largetraditional sports. WhenSamsung White won the championship in 2014, 27 million uniqueviewers watched the team take the crown. That same year, the WorldSeries averaged 15.8 million viewers and the Heat-Spurs NBA Finalsaveraged 15.5 million viewers. The LoL World Finals even beat USviewership of the World Cup Finals (26.5 million). This WorldFinals also happened to be ESPN’s first try at streamingLeague of Legends content.

LCS viewership numbers have alsorisen this season, climbing 11.7% in weekly hours watched,according to Gameloco. According to the data posted on thecompany’s website, the 2016 LCS has beaten the 2015 season inevery week. The graph is only for the main Twitch LCS streamthough, so the total viewership numbers are expected to be evenhigher with streams spanning dozens of platforms andlanguages.

With just over a week before the European LCS begins the summersplit, the timeline for a deal is expected to be condensed. Bothsides will need to move quickly to get the deal done in time forthe EU and NA summer splits. If the deal is not done before thestart of the splits, it might be a hint that the deal would onlyencompass the World Championship tournament. ESPN is no stranger toexclusive playoff content, having purchased the rights to theCollege Football Playoffs for $7.3 billion.

The potential deal gives Riot a massive cash influx and manyquestions as to where the cash will go. In the past, Riot hasinsisted that the LCS brings in no net revenue, even with the majorsponsors that have signed on. Player base salaries provided by Riothave not changed in years, according to many experts. With thisinflux, Riot has a chance to create a more stable, healthyenvironment for LCS pros and challenger players. Some are notconvinced that will happen.

“Betting almost none of itgoes into the pockets of the players,” tweeted GAMURS writer Duncan “Thorin”Shields.

“The pie might be bigenough that this acts as a galvanizing moment,” replied Bryce Blum.

How Riot handles this possiblenew mainstream attention and massive cash influx will be vital indetermining the long term prospects for the professional league.This new deal has the potential to bring esports mainstream or doomit mediocrity.

UPDATE: ESPN has responded with an officialstatement.

“The story is false. We do not deal with Riot Games to broadcastLeague of Legends.”

We will keep you updated on this developing situation, so makesure to check back here for any breaking news inthe esports industry.

What do you think this potentialtelevision deal means for the future of watching esports? Let usknow by commenting below or tweeting us @GAMURScom.