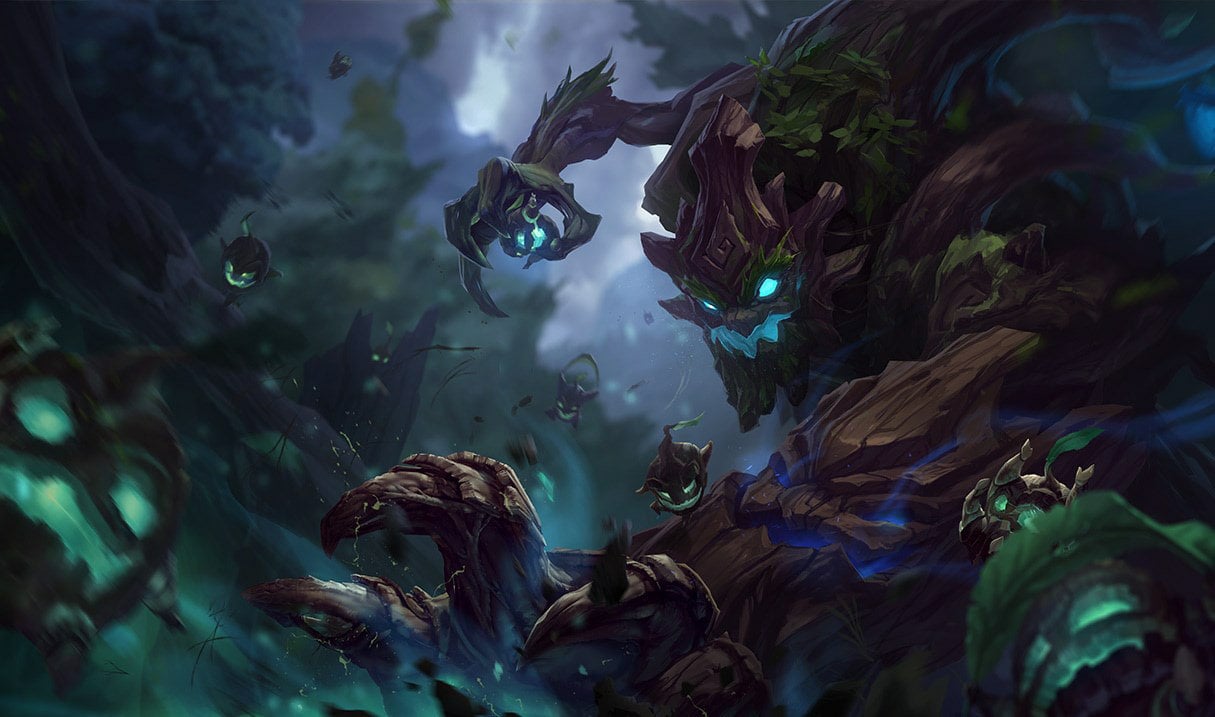 The top lane is one of the most controversial aspects of League of Legends in 2022. Certain champions and items have completely outclassed others, leaving much of the game’s roster designed for top lane play forced to sit and watch from afar.

Maokai is one of these champions that has struggled to perform well this season. Though he remains one of the best tanks in the game with his crowd control and self-sustain, champions like Ornn and Malphite often do his job better, making Maokai an incredibly niche pick at all levels of the game.

As a result, many players completely changed the way Maokai is meant to be used. Instead of a top lane tank, players have turned the Twisted Treant into a poke support, using the power of his saplings to completely take over the bot lane in solo queue.

While the pick isn’t super viable in professional play, players looking to climb in solo queue have used this iteration of Maokai builds to snowball leads. If Maokai is picked as a top laner, he should instead focus on tank itemizations and runes, as players will want to use him as the team’s initiator and major source of crowd control.

Here is the best support build for Maokai in League‘s 2022 season.

Aftershock: Maokai can activate this keystone through his Q, W, and ultimate. This makes it a great pick when engaging on enemies in the bot lane, and helps boost his tankiness in a build where tank items are not the priority.

Font of Life: Similar to Aftershock, all of Maokai’s abilities impair the movement of enemies in some capacity, allowing allies to heal a small amount for your efforts. This will be most prevalent in the early laning phase, where Maokai’s saplings are a major source of slows on the opposition.

Bone Plating: This poke build for Maokai unfortunately removes most of the tank aspects of the Twisted Treant that helped him thrive for years in the top lane. Since he’ll be the recipient of damage from both an ADC and a support, Bone Plating will allow Maokai to better initiate on his enemies with the help of his ADC.

Unflinching: The bottom lane is full of crowd control. While most of it comes from support champions, more recent additions to the ADC pool now boast ways to slow, stun, and root enemies. This means Maokai is going to want to take Unflinching and boost his Tenacity, helping to decrease the duration he is caught in crowd control effects.

Biscuit Delivery: Maokai’s passive allows him to regain some health by attacking an enemy minion or champion on a cooldown. Since he’ll now be dealing with two lane opponents instead of one, having some biscuits for the health and mana regen should help him with both his poke and sustain.

Time Warp Tonic: This rune goes hand-in-hand with Biscuit Delivery. Time Warp Tonic instantly heals Maokai for a portion of the potion or biscuit, which can be crucial in surviving bad situations.

Optional—Approach Velocity: Instead of Time Warp Tonic, more aggressive Maokai support players may find better use in Approach Velocity. Since players will be poking with Maokai’s E a lot, this rune will help them catch up to slowed enemies quicker for a follow up W plus Q combo. It also helps Maokai further punish enemies trapped in his ultimate.

As a support with melee auto attacks, Maokai should always start with a Relic Shield. Besides helping with his health regen in the early game, this item also allows him to execute low-health minions on a cooldown, giving complete gold to a nearby ally. Players should try and use these stacks on the second wave of melee minions to hit level two first.

During the laning phase, you are going to take excessive damage from enemy champions as you attempt to proc Relic Shield and throw saplings. Health potions are the best way to deal with this in the early stages of the game, especially when it might not be easy to activate your passive.

Like any good support, start with a Stealth Ward. This is best used around the time that the second wave heads to the bot lane, just to keep an eye on where the enemy jungler may be.

These three Mythic items are what allow Maokai to become such a powerful presence in the bot lane and should always be rushed first. Imperial Mandate is the best option for the poke build, as allies can deal more damage to enemies slowed by Maokai’s E or trapped by his R.

More aggressive Maokai players can opt for Liandry’s Anguish, burning enemies hit by Maokai’s abilities. The damage that this item can do when combined with Maokai’s E can chip away the health of enemy ADCs with just one attack.

Evenshroud rewards Maokai for disrupting enemies, but should generally be avoided unless players are going for a full-tank build in the support role. Maokai performs much better when given access to items that reward him for poke.

Whether players opt for building Imperial Mandate or Liandry’s Anguish, the burn associated with Demonic Embrace is an essential part for continuing to be a nuisance to the enemy team into the mid game. It also gives Maokai a sizable amount of health, perfect for engaging unsuspecting enemies.

Laning against champions that are constantly spewing crowd control abilities will hinder Maokai’s ability to engage on his enemies with his W, or even walk up to minions to proc the Relic Shield stack. Therefore, Boots of Swiftness are the safest option to continue existing in lane, though the item can be replaced with Plated Steelcaps or Mercury’s Treads to boost his resistances.

Grievous wounds have become increasingly necessary in League over the past few months. With how much healing champions have built into their kits, especially in the bot lane, building items like Morellonomicon are essential to winning games. This is Maokai’s best choice as a third item, depending on the enemy team composition. Players should consider building this item before Demonic Embrace should they go against heal-heavy champions like Soraka or Sona.

Stasis has remained a controversial aspect of League for years, and Maokai is yet another champion that enjoys its effects. With this support build, Maokai is susceptible to large amounts of burst damage without being able to retaliate. Zhonya’s Hourglass and Stopwatch give Maokai the opportunity to concentrate on his next move and allow for his teammates to save him.

Should players get access to a final item, Redemption is the best option. Maokai has no way to heal his allies through his kit, and his poke build makes him much less of a champion that can help his team sustain damage. Redemption gives Maokai the opportunity to protect his allies that other supports may be able to do naturally in their kits, but should not always be made a priority to build.