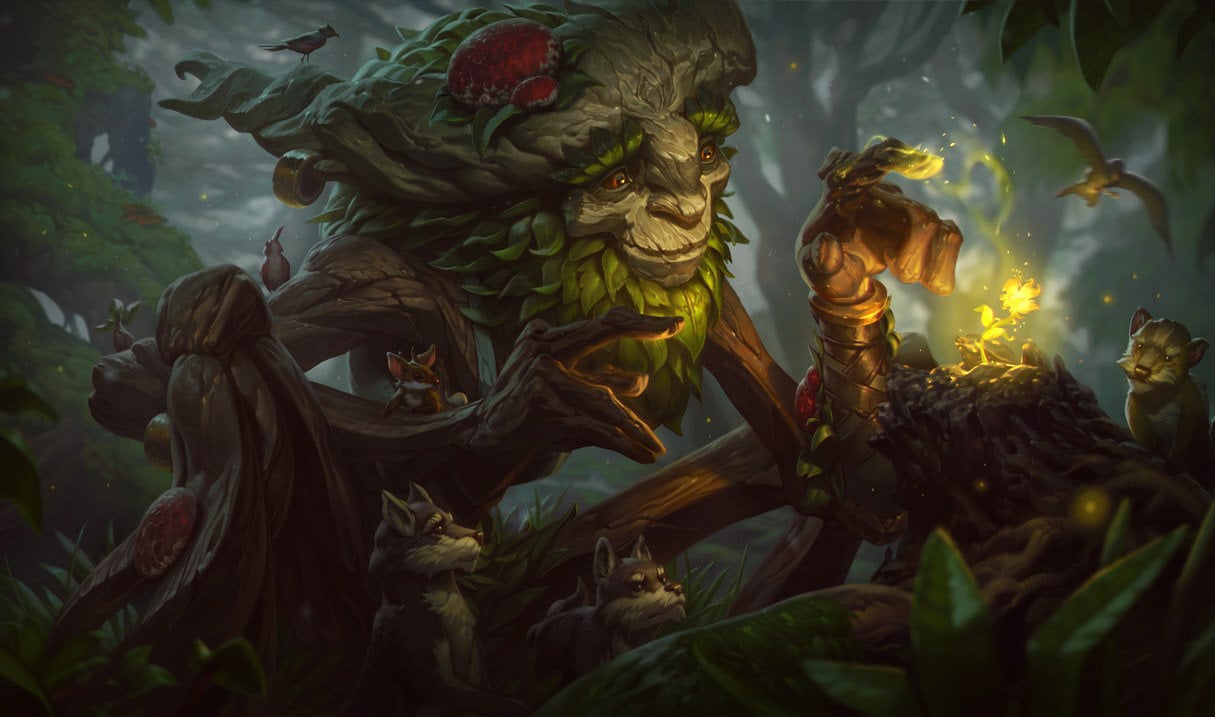 Ivern is one of the most unique utility junglers in League of Legends.

The Green Father is a support that enhances the power of his laners and relies on other champions to carry the game. Ivern is not a champion you should pick if you need to carry the game alone since he doesn’t have that much damage built into his kit. Ivern fits perfectly in the meta where you have at least one carry you can camp and snowball to ensure that they can take over the game.

Here’s the best build for Ivern in League’s season 10.

Summon Aery: This is the best keystone for any utility-oriented jungler. You have plenty of ways to activate it in your kit, doing extra damage to enemies during ganks or giving a little bit more effective health to your teammate. Summon Aery is easy to use and has a huge impact throughout the game.

Manaflow Band: Manaflow Band is a great rune to solve your mana issues since you will be spamming a lot of abilities the entire game. Having an extra 250 mana helps a lot and gives you the necessary resources to throw that extra shield in the teamfight to help your allies.

Gathering Storm: Gathering Storm offers scaling ability power to make your shields stronger as the game goes by. Ivern isn’t the best scaling jungler, so this rune compensates a bit for this weakness.

Cosmic Insight: Cosmic Insight ensures you can use your abilities and summoner spells more often. Ivern benefits from this perfectly, especially with Transcendence. If you go above the 45-percent limit of cooldown reduction, you’ll get extra ability power.

Hunter’s Talisman is a required item to start in the jungle. It helps you clear camps without losing too much health by giving you a healing and damaging effect, and regenerates your mana while you are located within the jungle. While you won’t upgrade it to the traditional jungler items later on, it is a requirement to have in the beginning.

You’re going to take damage from monsters while clearing your jungle. Having this potion allows you to regain 250 health over 24 seconds, which can be refilled by going to the base. It’s a small gold investment for such a bargain.

These are one of the best boot options for a utility jungler who wants to be where his teams need him as soon as possible. They allow you to cover huge distances over a small period of time, which is perfect in this roam-heavy meta. In a couple of seconds you can cover the entire map, assisting your allies if they require your aid in the blink of an eye.

Athene’s Unholy Grail is a great utility-oriented item to ensure that your shield gives your ally a small heal. The passive is easy to stack with the damage from your kit so that every shield will have a small healing effect on top of it. The item is very cheap and the stats are great.

As Ivern, you’re going to be sitting in the backline most of the time. As a result, you can invest in a Mejai to gain a lot of ability power for only 1,400 gold. The initial component item of Dark Seal costs only 350 gold and can be purchased after your initial back easily. If you get some stacks going due to a good early game, you can ensure that the snowball keeps growing and your carries get stronger as the game passes.

Once you provide some early vision via the yellow trinket, you won’t be needing it anymore. Swap to an Oracle Lens after your first or second back and use it to deny vision from the enemy. You can set up a gank by using it to clear vision or use it near the dragon or Baron to clear vision so that the enemy has no idea that you’re taking the objective.

One of the best uses can be to set up a death bush when you’re far behind. Clear all of the vision around you and wait patiently, and you may be able to turn the tides of battle by catching out an unsuspecting opponent.

Always buy two Control Wards when you can. While the Oracle Lens has a cooldown and can be countered by the enemy team after it expires, the Control Ward remains in place and ensures that no vision is being allowed in the area you’re using it. As a jungler, you want to make sure that you have one on the map at all times and one in your inventory for backup, especially if you intend to do objectives.

While purchasing core items in this guide is important, Control Wards are just as valuable. Always invest in vision. Don’t leave the base without having purchased one or two Control Wards.

This is a cheap item that goes well with Athene’s Unholy Grail. While Athene’s can be purchased anytime, Ardent requires you to have an auto-attack oriented champion to benefit from it. Rush it after Athene’s if you have a good auto-attack carry to ensure that they can take over the game.

This is the best utility-oriented item in the game. It scales with bonus health, making it very valuable as the game goes by. While the item itself grants you only armor and magic resist, the effect can win you the game during a teamfight. You can deny heavy AoE damage from the enemy composition, saving your team from that Orianna or Karthus and winning the game. Rush it against heavy AoE-focused compositions.

Redemption is the second-best utility-oriented utility item in the game following Locket of the Iron Solari. It grants you valuable stats in health and mana regeneration and an AoE effect that heals allies and is usable even while dead. It can help your team significantly in teamfights by restoring a portion of their health or finishing the low-health members of the opposing team instead.

If you’re facing a lot of crowd control and ability power-oriented compositions, then getting this item can make your early game much easier. With more mages becoming popular in the bottom lane, this item is perfect to counter them early on. The tenacity is valuable and the more you have, the easier it is to move around a teamfight.

This is a great item against heavy AD-oriented compositions that rely on auto attacks. It helps you avoid plenty of their auto-attack damage while also granting you a good amount of armor to reduce the overall physical damage from their kit.

Ionian Boots of Lucidity are a great alternative to the Mobility Boots. If you are focusing on camping one or two lanes with your main carry, then getting the extra cooldown reduction is more valuable.

If the enemy has a lot of crowd control, then getting this item will be a much better investment compared to other utility items. It allows you to cleanse your teammate from crowd control so that they can continue fighting.

This is a cheap utility item to improve your team’s mobility. If you’re facing compositions who poke or instead want to run you down as soon as possible, then this item should be on your priority list. On a 90-second cooldown, it grants you and nearby allies 40 percent more movement speed for three seconds. It allows you to either engage or disengage quickly and then reposition yourself for another teamfight.