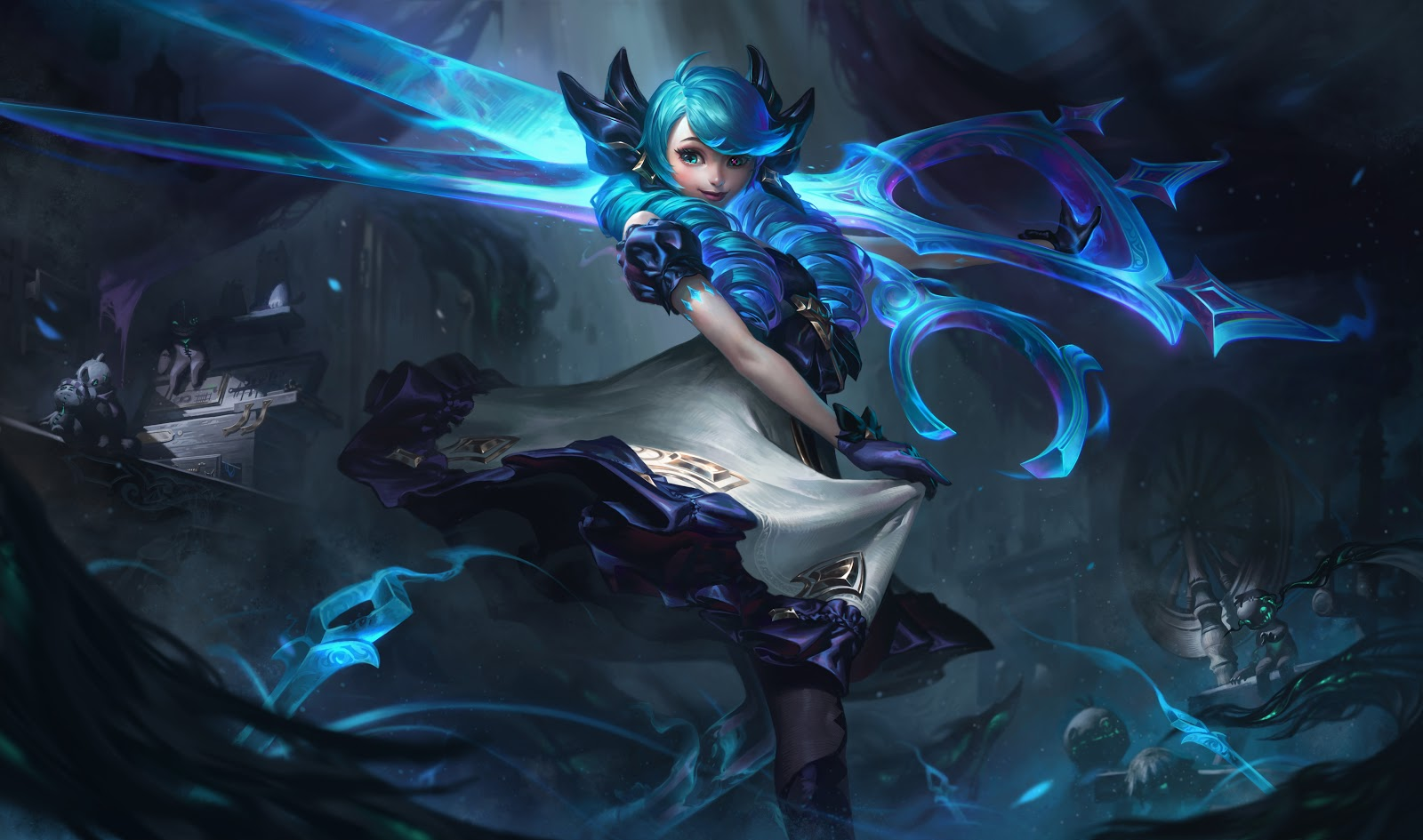 Gwen is a perfect example of a League of Legends champion that’s easy to learn but hard to master. With her complex kit, she’s one of the strongest top laners in the game, especially if you have a teamfight-oriented composition.

Thanks to her abilities, you can often come out on top of one-vs-x scenarios if you play the skirmish well. Her damaging abilities scale tremendously as the game goes on, and with proper usage of her Hallowed Mist and the items you’ll be building, it’s not that hard to dodge some of the enemies’ major skill shots.

Due to Gwen being a late-game champion, her laning phase naturally isn’t the strongest. Still, if you put enough effort and manage to get an in-depth knowledge of her abilities and potential, there are plenty of matchups that you can win on your own.

Once the match reaches the late game, there are a bunch of possibilities for Gwen. She can be a pain in your opponents’ neck by splitpushing and creating constant pressure on the sidelines or tip the balance of a game-deciding teamfight with a properly used ultimate. Those assets make Gwen one of the most fun champions to play right now in League.

The main goal of playing Gwen is to become an incredibly powerful fighter that most champions are afraid to face on their own. With her kit, which relies on repeatedly using abilities and basic attacks, and a passive that heals her while dealing damage, it’s easy to win a lot of solo fights.

Here’s the best build for Gwen in League of Legends.

Conqueror: Due to Gwen being a tremendous fighter, it makes a lot of sense to pick one of the major runes from the Precision tree—and there is no better option from there than Conqueror. With that under your belt, you will deal additional adaptive damage with every attack, improving her killing threat. At full stacks, Gwen will also heal a portion of the damage done, which boosts her sustain.

Presence of Mind: Like most ability power-based champions, Gwen is quite mana-hungry, especially in the early game. To help you ease the issues caused by a lack of mana, it’s smart to pick Presence of Mind, which increases mana regeneration and restores 15 percent of maximum mana once you score a takedown.

Legend: Alacrity: Besides abilities, Gwen will have pretty powerful auto attacks as well, which are pivotal in her kit (especially since one ability empowers them). Therefore, it’s wise to increase Gwen’s attack speed by choosing Legend: Alacrity, which directly increases that statistic.

Last Stand: Like every fighter, Gwen will aim to get in the middle of the enemy team and shred through opponents. As a result, she should often be low on health, so it’s sensible to pick Last Stand. This rune enhances your damage while you are low and fits Gwen perfectly.

Second Wind: All in all, Gwen won’t be stacking many defensive items, if any, so it’s smart to boost her defensive stats with runes from the second tree. Second Wind helps with that by healing her after she takes damage from enemy champions.

Unflinching: Unflinching grants a champion five percent of tenacity and slow resistance each, which increases to an additional 20 percent, based on a champion’s missing health. Looking at Gwen’s gameplay, it’s a superb rune for her.

Doran’s Ring: At the beginning of the game, having an item that polishes your ability to wave clear minions and skirmish with the enemy top laner is essential. In terms of that, there’s no better option than Doran’s Ring, which gives you health, ability power, and makes you kill minions quicker.

Health Potions: Every top laner needs a way to replenish their health at the beginning of the game and Gwen is no exception, especially since she’s not an early game-oriented champion. Health Potions will come in handy in almost every game.

Stealth Ward: Being aware of potential ganks from the enemy jungler is a pivotal part of any top laner’s gameplay, Gwen included. Having those in your inventory will allow you to keep an eye on any roaming champion and jungler.

Riftmaker: This is undoubtedly the best Mythic item for Gwen. Not only does it boost your main stats, like health, ability power, ability haste, and omnivamp, but it comes with a unique passive as well. The ability, called Void Corruption, makes Gwen deal bonus damage, which at maximum strength is converted into true damage. It also grants other legendary items two percent of omnivamp and eight ability power.

Nashor’s Tooth: Runes won’t be enough when it comes to boosting Gwen’s attack speed, so it’s wise to have at least one item that will do so. And for AP-based champions, there is no better option than Nashor’s Tooth, which gives you 50 percent attack speed and an eye-watering 100 ability power.

Plated Steelcaps: These boots are the best option in today’s meta where AD-based top laners and hypercarries are among the strongest champions in the game. If you are matched against an AP-based composition or play versus squishy champions, however, there’s nothing wrong with buying Mercury’s Treads or Sorcerer’s Shoes, respectively.

Zhonya’s Hourglass: Like almost every AP-based champion, Gwen needs some survivability and defensive assets. And like every AP champ, Gwen should pick up Zhonya’s Hourglass. This item comes with one of the best active abilities in the game, which puts you into stasis for 2.5 seconds, during which you are invulnerable and untargetable. It’s essential for dodging enemy ultimates, abilities, and summoner spells that you are targeted with. Besides, it gives you a lot of AP, armor, and ability haste.

Morellonomicon: If you’re going for a fully offensive build, Morellonomicon is often the best item to grab as the last one for your inventory. With 90 AP and 300 health, it’s menacing on its own, but it also makes your attacks apply Grevious Wounds on enemies. This passive should make you an even bigger threat in the late game than you already are.

There are a few lane bullies that might quickly eliminate you in the first minutes of the game, and if they do so once, they will do it until the mid game comes around. The most standout one is Renekton. His kit allows him to close the gap between you and him very rapidly, after which he can just stun you, deal some damage, and escape until you are able to react. He’s very dangerous for Gwen since he can shut her down so hard that she won’t be able to return to the game in time. When playing against Renekton, your best move is to farm as safely as you can.

Urgot is an extremely annoying champion for Gwen. His ranged attacks and abilities make laning against him hell for Gwen mains. Furthermore, once he lowers your health to a point where he can one-shot you with his combo, he’ll just cut the gap with his E and do so. The best and only advice for playing against Urgot is similar to Renekton’s case: just play it safe, freeze the wave, and try asking your jungler for help.

Singed is a tricky champion to play against for a few reasons. As soon as he hits level two, he can flip you with his E, which is always hard to trade back since he’ll have his poison trail on. Therefore, you’ll take additional damage if you try to fight back and he’ll always win the trade. Besides, his abilities make him one of the easiest top laners to gank for, so his jungler might look around the top lane for some easy kills. When playing against Singed, don’t engage for trades and be careful once he approaches minions with his Q on.