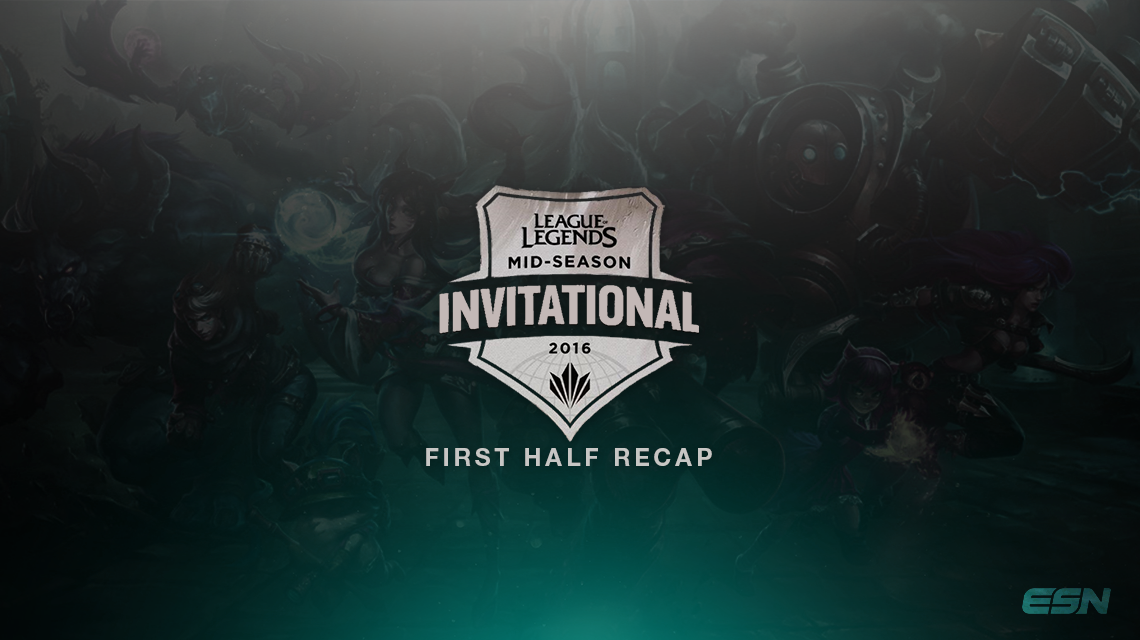 The League of Legends Mid-Season Invitational (MSI) is currently halfway through the double round-robin group stage with each team having played each other once. The tournament has been unbelievable so far, with some already dubbing it the best non-Worlds tournament to date.

*Note: Standings only count first play through of the round robin.

One Thing We Have Learned About Each Team

RNG has truly lived up to their name in the tournament so far by refusing to give up and taking down powerhouses SK Telecom and Flash Wolves. Thought by many to be a struggling team coming in to MSI, RNG has exploded out of the gate with a strong early showing finishing atop the standings with a 5-0 record.

While RNG has impressed early, they have also made it very clear that they are still a young team that is learning how to close out games. Of the five games they have played, RNG has finished in the gold lead every time and currently have an average game time of 41:50, which is the highest average game time at MSI and significantly higher than RNG’s regular season average of 36:19.

RNG finishes each game with an average gold lead of 8,300 and four dragons and just over one baron. They are dependent on getting such an insurmountable advantage over their opponent that they are nearly impossible to stop. Nearly all of RNG’s games have come down to a final team fight, with the winner finishing the game shortly after. The only game where they bucked the trend is the final game of the round robin, where RNG’s aggression led to a quick 35 minute game against FW.

While RNG might struggle closing games, rookie jungler Liu “mlxg” Shi-yu has had no problems dismantling the competition. In the first five games, mlxg posted an MSI best 10 KDA while playing four different champions: Nidalee, Lee Sin, Graves, and Kindred. Every KDA mlxg has posted has been above all other junglers average KDA. Mlxg is part of the most first bloods (67 percent), has the highest CS per minute of all junglers, and has the second highest kill participation for junglers. He also is tied with teammate Jang “Looper” Hyeong-seok for lowest share of their team’s total deaths.

If RNG wants to continue their success at MSI, mlxg has to continue to be great and outplay all other junglers. Having Cho “Mata” Se-hyeong play his legendary Alistar does not hurt either.

Flash Wolves (FW): Maple is currently one of the best mid laners in the world.

After posting a fourth best 6.7 kill-death-assist ratio (KDA) at the 2015 World Championship, Huang “Maple” Yi-Tang was somewhat overlooked heading in to MSI. The presence of Lee “Faker” Sang-hyeok (SK Telecom) and the impressive rookie duo of Li “Xiaohu” Yuan-Hao (RNG) and Luka “PerkZ” Perkovi? (Gamers 2) diverted attention from the Taiwanese mid laner. Since the beginning of the tournament, Maple has shown he deserves to be in the conversation of “Best mid laner on the planet.”

At MSI, Maple has posted an impressive 8.43 KDA. Against Faker, Maple tied his best KDA of 11 while Faker could only muster a 1.33 KDA. Maple also posted an 11 KDA against the European “Rookie of the Split” Perkz. Maple is also doing the highest percentage of his team’s total damage at 34 percent and is involved in 81.4 percent of FW’s kills, an MSI best.

While FW have been impressive, they stumbled against CLG and G2 at the start of MSI. In the G2 game, Flash Wolves posted the lowest gold differential of the tournament against a team that has only won one game. They followed this up with a lackluster performance in a loss to CLG. Following the CLG game, FW bounced back with commanding wins against SuperMassive and SK Telecom.

After losing an all-time great in Yiliang “Doublelift” Peng, some fans were rightly cautious as to how the rookie Trevor “Stixxay” Hayes would fill his shoes. If MSI is any indication as to how CLG will find success, Stixxay is vital to CLG’s future. So far at MSI, Stixxay has been impressive in game and adequate on the stat sheet, posting a 3.50 KDA which ranks him third out of the six ADCs that have competed. He currently has an MSI second best 78.2 percent kill participation and is on average 312 gold above his lane opponent at ten minutes, an MSI best.

The surprise for CLG is that their success seems almost directly dependent on Stixxay’s lane opponent. In CLG’s three wins, enemy ADCs posted a split of 7 kills/ 11 deaths/ 13 assists (1.81 KDA). In those same games, mid and top laners fared better, posting 4.42 and 2.11 KDAs respectively. Stixxay also posted team best KDAs in wins against FW and Gamers2 (6.50 and 13). In CLG’s three losses, Stixxay’s counterparts have posted KDAs of 3.75 and 4.67.

It seems that the more pressure Jake “Xmithie” Puchero and company impart on the bot lane, the better chances CLG has of winning. While Stixxay is not the only reason for CLG’s success, it is a bright spot for a team that many had written off before the tournament started. MSI is an incredible experience for a team that has two rookies in vital positions, and CLG can use what they have learned at MSI to potentially three-peat as North American LCS champions.

Every League of Legends fan knows the legend of Faker: the Ryu outplay, the two world championships, and the unbeatable aura that follows Faker around. What might surprise non-avid watchers of the LCK is that Bae “Bang” Jin-sik has been the most consistent and outstanding player on SKT.

The reason Bang has been so successful is up for debate. There is no concrete evidence to suggest that the extra pressure that Faker brings helps or whether Bang is just outstanding on his own. What is not up for debate is the impressive stats that Bang is currently putting up.

Through the first five games, Bang is the only player on SKT to post at least 30 percent SKT’s total damage more than once. In fact, Bang has done it in every game while Faker has only achieved it once, in a loss to FW. In SKT’s sixty minute loss to RNG, Bang was able to deal out 41.3k damage while Faker only managed to deal 21.9k damage. In their wins, Bang has also been more successful: 30 percent and 30 percent to Faker’s 23 percent and 22 percent. Bang has also posted the highest KDA (6.25) of all ADC’s at MSI. Look for SKT to get Bang more involved in games moving forward.

SKT is a talented team full of world champions and a top tier coaching staff. Their early struggles against RNG, CLG, and FW should have SKT more focused moving forward. The best thing SKT does is that they treat losses as learning experiences. Last year they finished second at MSI and won Worlds. Do not sleep on SKT after an early pair of losses.

Everyone has been talking about the break G2 took leading up to MSI. After mid laner Perkz posted a tweet about the team taking a break, news broke that G2 had very limited practice leading up to MSI. G2 is now tied for last place and European fans are left wondering how their team has fallen apart.

The biggest concern for G2 has been its three rookies: jungler Kang-yoon “Trick” Kim, mid laner PerkZ, and coach Joey “Youngbuck” Steltenpool. Coming into the tournament, Trick was named EU’s MVP, PerkZ won “Rookie of the Split”, and Youngbuck won “Coach of the Split”. All three were expected to take a small step back due to a lack of experience, but still be successful on the international stage.

All three have been disappointing so far. Trick currently holds the second worst jungler KDA at 1.38, only .06 points above SuperMassive’s jungler. PerkZ sits at the bottom of mid laner KDA with a very poor 1.21, saved only by his 12 KDA game against Wildcard SuperMassive.

The choices from head coach Youngbuck have been questionable at best. Youngbuck has defaulted to having his team pick their best champion from the EU LCS regular season. The issue with that choice is that teams are playing to a brawling, LPL style game which negates the macro heavy play that G2 is used to. A coach’s job is to put his team in the best position to win. Youngbuck must evolve G2’s pick/ban phase to give them a better chance moving forward.

“We want to be seen as a real team, not as just a wildcard,” said SUP’s support Mustafa “Dumbledoge” Kemal Gökselo?lu.

So far, SUP has shown that they have the ability to stick around in games and threaten some of the lower tier teams, but overall, SUP is still a few steps behind the top four teams. SUP currently has the fastest average game time (33:32) and has the lowest KDAs at three of the five positions: top, jungle, and support.

Mid laner Nicolaj “Achuu” Ellesgaard has been a bright spot for SUP though. Achuu currently has the highest CS differential at ten minutes (+9.5), a vital stat for determining a player’s performance early. Achuu is also fourth in CS per minute, showing that Achuu is an extremely capable laner even in the star studded mid lane position at MSI.

SM has gained valuable experience at MSI that they can use going forward. The Turkish “super team” is a favorite to get a wild card spot to the World Championship later this year so this is not the last time you will see of them.

What do you think about the action at MSI thus far? Let us know by commenting below or tweeting us @eSportsNation.