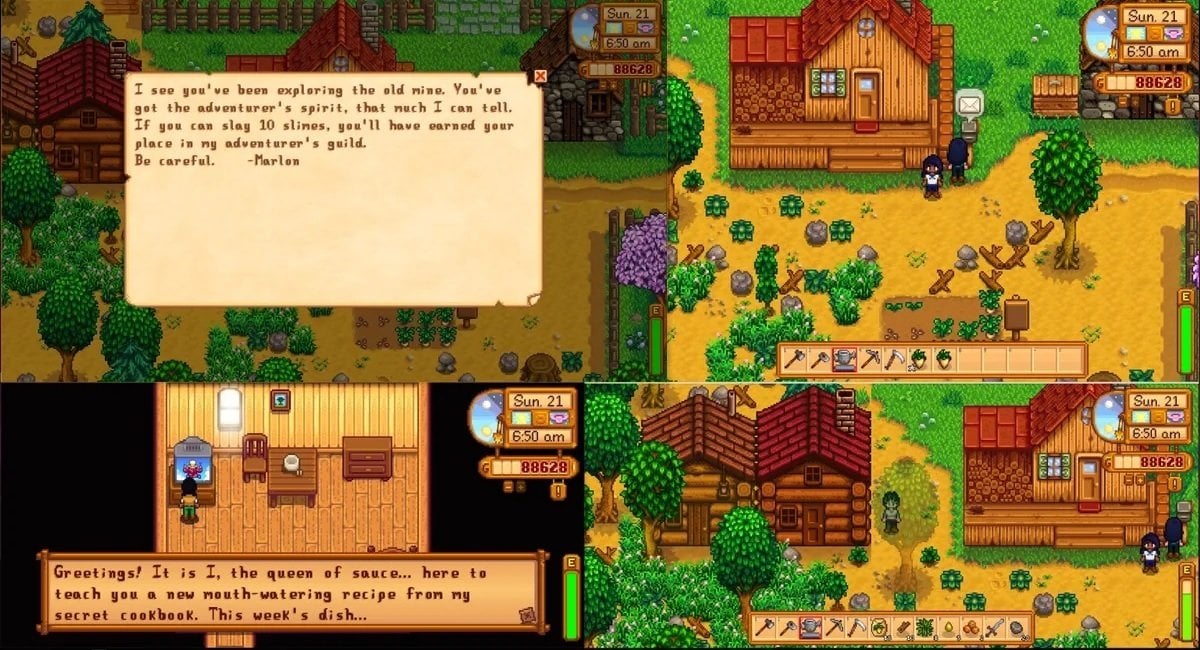 Stardew Valley is a life simulation farming RPG in which players take on the role of a farmer who leaves their old life behind to inherit the farm of their late grandfather in the land of Stardew Valley. The simplistic and charming pixel art graphics were an eye-catching feature that appealed to old-school and casual players everywhere.

To make the game more fun and engaging, Stardew Valley has co-op features enabled that support up to four players. Making the setting feel more personal, the game has also allowed for split-screen gaming, something modern games don’t implement very often anymore. This feature only adds to the old-school nostalgic feel of the game and is something players have praised globally.

The Stardew Valley multiplayer update released in 2018 brought in split-screen co-op compatibility to the game on both consoles and PC. This allowed players to play with up to three friends, completely changing the way the game is played.

Starting off, the game allows players to choose how they can split their resources and who controls what aspect of the farm while the co-op session is active. Once that is decided, co-op farming entirely revolves around the Cabin farm building that needs to be acquired first. The Cabin farm can be bought from Robin.

When it comes to saving, every save file is stored on the device of the player that hosted the online session. This means if the host leaves the session, the other players involved will not be able to continue playing in the same session. This is something to keep in mind when players are creating a new co-op farm so everyone gets adequate time to play together.

There are two ways to play multiplayer in Stardew Valley. Players can either create a new farm with nothing pre-existing from earlier sessions or just choose to convert an existing single-player world into a multiplayer session. Each method has a different way of functioning.

If players choose to start from scratch, the assigned host has to go to the main menu of the game, then select the co-op option and select Host. Upon doing this, the host also has to decide how many cabins they want to choose depending on the number of players they have, up to four as specified earlier. These are the basic settings to choose after which the host can make any alterations to the world as per the liking of their party and start the session.

If players choose to start from a pre-built single-player world, things work a little differently. The host needs to load up the single-player save file they wish to start from, then talk to Robin. They need to decide how many cabins they want to build for their existing party and Robin will handle the rest. After creating the required number of cabins for the party, the host needs to save and exit the world, then navigate to the co-op option again, and instead of selecting “Host” this time, choose “Load,” then the save file of the single-player world created earlier to load it up for a multiplayer session.

Regardless of the method chosen, once the session is hosted and ready, other players will be allowed to join the game. Once the host starts up the session, they need to check their settings and open up the world to multiplayer. This is a necessary step because all worlds in Stardew Valley are closed to other players as their default setting. Once the world is visible, other players can join in and start playing.

These are the features that are shared between all players:

And there are some things that cannot be shared as well:

And that’s all you need to know to play multiplayer in Stardew Valley. For best results, we recommend getting friends along to share in the calming countryside lifestyle and relax after a stressful day of work.