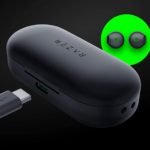 Sometimes standard earbuds may not be enough for our gaming needs. Gaming is a serious business and communication is always key. Sounding great while being able to hear everything around your surroundings can be just as important and net you a win.

While some may be correct in assuming earbuds can’t carry the impact of a full gaming headset, earbuds have plenty to offer. They are generally cheaper than headsets and are more compact. They also let you have intense gaming sessions without sweaty ears, especially during the summer.

Earbuds have significantly become more popular in mobile gaming due to their practicability and mostly because most mobile games can only take advantage of stereo outputs. Investing in a 7.1 headset for mobile gaming won’t be practical since the game of your choice isn’t likely to utilize it.

Competition is quite high, and choosing the right earbud for you may turn into a struggle. Fear not—we did our best to gather the best recent earbuds to help those in search of a pair and hopefully, you stumble upon that “one” on this list that best fits their gaming needs. 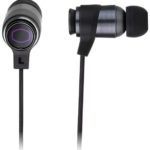 Cooler Master has been one of those brands that just keeps delivering quality products and earning customer respect by providing value. When the brand first entered the market, there were certainly a couple of doubts, but it simply allowed its work to do the talking.

The company’s take on “gaming earbuds” is quite different than that of its competitors. Instead of copying and pasting an already successful formula, Cooler Master prefers pushing the limits and setting new standards.

The earbuds come with different profiles; one provides a stronger bass while the other emits a more balanced sound that you can change between with a button on each bud.

The sleek design of the earbuds may also catch your friends’ attention. 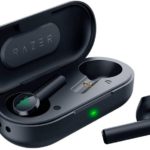 It’s hard not to mention Razer when the topic’s anything related to gaming. The company has been in the industry since 2005 and is the pioneer of the RGB era.

Razer Hammerhead True Wireless includes everything you need to know about it in its name. It’s a truly wireless pair of earbuds which sits comfortably in all kinds of ears since it doesn’t push into ear canals. Though it’s true that going wireless increases the amount of input lag, Razer Hammerhead True Wireless’ “Gaming Mode” helps decrease the response time to the lower end of the spectrum.

Activating the “Gaming Mode” of the earbuds reduces the latency to 111 milliseconds on PC, 22 milliseconds on Android devices, and six milliseconds on iPhones, according to RTings. The experiments were conducted to ensure that the earbuds are an overall solid choice for competitive mobile gamers. At the same time, they can be used for casual content consumption on PCs and laptops.

The earbuds’ bass-heavy sound profile can be less than ideal for certain music kinds; but it does a great job of amplifying sounds like footsteps and gunshots in games. Though the earbuds’ microphone could also be better, they’re more than enough for simple in-game communications. 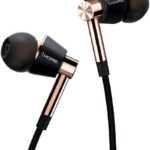 At the start of the 2010s, there were only a handful of players in the audio market. As the market turned into a monopoly slowly, alternative brands started emerging to challenge the titans’ throne and offer an out for users that want the most bang for their buck. Backed up by Xiaomi, 1More has earned the respect of many audiophiles on a budget.

Besides offering superb and balanced sound quality considering its price tag, the 1More Triple Driver also shines with its in-line microphone. It’s one of the best microphones you’ll find on a pair of earbuds. The only drawback of the microphone is that it struggles a little in loud environments. It struggles to block most of the background noise, which can lower the quality of voice calls in crowded areas.

1More Triple Driver comes pre-packed with nine different earbud tips, making it a perfect fit for all types of ears. If you’re an audiophile, you can notice a slight favoring toward high-bass tones, and an in-line control panel is also present to allow you to adjust the volumes through your headphones easily. Ear-tips provide an excellent level of noise isolation, but it’s nowhere near what a gaming headset would be able to give, so preferring quiet environments can help you climb up the ranks faster. 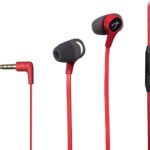 When HyperX first entered the market, the company’s biggest selling point was its comfortable designs. We’re glad to see that HyperX still prioritizes comfort and possibly provides the highest amount of comfort-related customizations in all audio pieces.

Their marketing strategy for this one is rather one-dimensional, however. The buds are specifically advertised towards Nintendo Switch gamers. If you do not own a Switch, don’t worry—the HyperX Cloud gaming earbuds are still great buds and will perform just the same with anything else.

Their biggest selling point is the comfort and the immersive audio quality. While they do sound fine and great for general usage, don’t expect anything mind-blowing if you’re an audiophile. 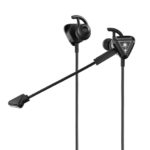 The biggest drawback of every gaming earbud may be their microphones. Although we’re quickly progressing to better microphone technologies, bud mics may just perform poorly in some conditions. The fact that they’re usually quite far away from the user’s face does not help their case either.

But Turtle Beach must have had enough with microphones that dangle around the user’s shoulders and created the Battle Buds. One of the earbuds features a microphone that extends out to the user’s mouth.

The public’s initial thought was that the bud with the mic on would constantly fall out of the ear, but that was just not the case. Unfortunately for fans of Turtle Beach, just like most earbuds, this pair also suffers from sound leakage at higher volumes. Considering the microphone of the Battle Buds is quite sensitive, those you’re chatting with on mic may ask you to switch to push-to-talk. 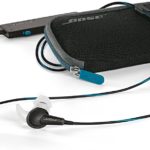 Gaming-focused brands are not the first ones to enter this market. There have been some big players long before they set their feet into this jungle.

If you were ever in the market for anything audio related, you’re probably familiar with Bose. The American company only focuses on audio products—they even have “Audio Sunglasses,” although they’re not really suitable for gaming since they were not designed with the activity in mind and because of their short battery life.

With Bose QC20, however, you can’t really go wrong. The price tag is a bit on the expensive side, but when it comes to Bose, we are talking about a pair of headphones that will probably last for at least five years. These earbuds also feature the trademarked Bose noise-canceling technology, which shuts out the outside world with acoustic noise cancelling.

If you’re looking for a new daily driver and gaming is your second priority, give this pair a try and see if you like them. They are quite comfortable and also stay in your ears thanks to their well-designed ear tips. 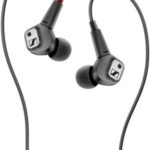 Do you ever find yourself wishing your headphones had a little more volume? Or do you wish they would stop popping out of your ears? If so, Sennheiser has just the product for your needs.

Just like Bose, Sennheiser has been in the earbuds game for as long as anyone can remember. The German brand has been the go-to source for earbuds for anyone unfamiliar with what to pick. After all, one could never go wrong with Sennheiser products. The company’s two-year warranty period is one of the best out there.

IE 80 S is slightly different than the classic earbuds that have saturated the market. They are branded as ear-canal headphones while being designed for “audiophiles.” Ear-canal earbuds have to be smaller than usual to fit a bit more tightly, so all the technology inside an earbud has to shrink while providing the same or an improved version of your brand’s signature audio quality.

Since these earbuds are smaller than the average pair, they may get stuck in the unlikeliest of places, like maybe a tiny gap you didn’t know existed in your bag. To protect the buds, Sennheiser claims that they have used the most durable and rugged housing to date yet.

While the price is a bit on the premium side, Sennheiser earbuds can definitely be a “buy-it-for-life” choice. 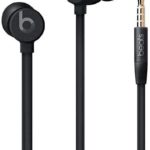 Moving on from the classics can be hard. While some gamers are more open to experimenting with new brands, others prefer the ease of mind that a reputable manufacturer provides.

Beats’ urBeats3 is one of the entry-level offerings of the brand. Despite being far away from the brand’s luxury models in terms of price, the price/performance ratio it brings to the table makes it one of the best earbuds on our list. The earbuds’ sound profile can be considered more natural and accurate, offering a balanced sound experience.

The build quality is top-notch, and urBeats3 does a better job of sound suppression than most models in its price range. The same can’t be said for its microphone, however, since it struggles to block external noise in crowded places. If you’re an Xbox One owner, note that urBeats3’s microphone won’t work with your system, which can be a deal-breaker if you enjoy gaming in parties with friends.

The back of the buds are magnetic, meaning the two pairs will stick to each other when close. This makes them easier to carry around and helps prevent the cable from getting tangled when you stuff it into a backpack. 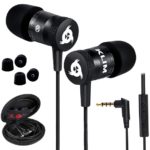 Let’s take a step down in the price bracket and consider something more affordable. KLIM Fusion is one of the most popular gaming earbuds on Amazon. They feature memory foam tips, which basically means that the tips eventually form to the shape of your ear canal with enough use.

The price and performance ratio with this pair is off the charts, and the audio quality is punching above their weight. The most common problem in the sub-$50 price range is the fact that most earbuds’ materials feel cheap and do not last long.

KLIM Fusions don’t have these problems. They feel as if they are premium headphones and provide a satisfying song quality. Their microphone can also be one of the better ones in the market, so if you are on a tight budget, give them a try. 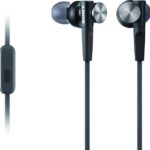 Sony’s back with another weird product name—the MDRXB50AP (MDRs).

MDRs are not practically branded as gaming earbuds. They are one of the cheapest earbuds being offered by Sony. The main reason they rose to fame is because of their sound quality. Most users describe them as one of the products with the most price for performance value out there.

They were designed to have more bass than the usual Sony headphones in their price range, and they definitely keep their promise. The fact that they also fit quite comfortably and come with an integrated microphone makes them a go-to choice for most gamers.

If you are on a budget and would also like something from a well-known brand, MDRs are definitely worth a try and will get the job done. 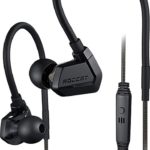 ROCCAT has been around for ages. The company likes keeping its products a bit more low-key and focus on delivering quality instead. ROCCAT Score slightly resemble the Sennheiser earbuds previously mentioned.

They look similar but cost less than half the price of the Sennheiser pair. If you are an audiophile, you may notice the difference in the bass and the clearance of the sound. But if you can’t tell the difference between a left bud and a right bud, these earbuds are definitely worth a shot.

The dual driver setup of the buds aims to provide a decently balanced audio experience while the ear-canal design lets them sit comfortably in your ears. Fans of minimalist and futuristic looks will appreciate their simplistic design.