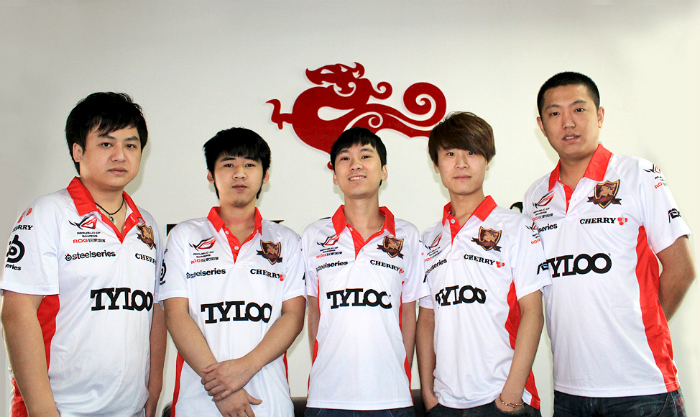 According to HLTV.org, in 2016 TyLoo have attended twelve offline tournaments in China. They have also taken part in four international tournaments. The team’s resume includes a best-of-three win over SK – then known as Luminosity at DreamHack Masters Malmo – and single map victories over Na`Vi, Liquid and Immortals. They also took a map off of Astralis, who were a few rounds away from losing the entire series, before device’s 31-4-18 performance powered the Danes to victory. In addition, their peak on the HLTV.org world ranking is currently 14th, while they have mostly stayed among the top 20.

That is a solid resume, and the fact they have managed to score wins over elite teams puts them in a higher bracket, having already proved some of their best case potential. Currently the team’s biggest problem is their international inactivity – while they play plenty of tournaments in China, they rarely face elite-level competition, or get exposed to European teams. That they are so dominant in China hardly helps – as a fellow analyst put it, they basically get away with murder due to having such a sizeable advantage in terms of individual skill domestically.

Preparing for ENCE’s IeSF grand final versus TyLoo, I could not help but think the Europeans losing against them are not doing their homework at all. In minutes you can find countless GOTV demos, including from Chinese competition, as well as the latest VODs of their games. You also have access to TyLoo’s veto history, which gives you important knowledge on how to game the first part of the match – the one that takes place before anyone shoots a bullet on a server. The data is there, but it does not seem like teams are willing to look into it enough to understand their style of play. And some have paid the price for it.

The number one thing stopping TyLoo from evolving right now seems to be their success. It seems contradicting, but let me elaborate. They have had enough success playing the style they have, that it seems to have been vindicated. It hides their problems, and allows them to look for other excuses for losing. Their strengths hide some gaping holes in their gameplay, and their coaching staff must be aware of them. But it is not easy to tell players who are mostly winning the way they are playing to change their habits. And playing in China, where they presumably win a lot in practice as well, exacerbates the problem.

TyLoo’s status domestically has similarities to NiP’s reign in the early days of CS:GO. Their tactics are simple, but their firepower has thus far allowed them to escape unscathed from a number of battles with VG.CyberZen, their number one Chinese rival. A key difference, however, is that TyLoo’s fast play is much riskier. NiP played a slow, methodical style that allowed them to adjust their mid-round calls and work off of the picks of f0rest, with the world’s best clutch player in GeT_RiGhT to close the deal. TyLoo lack those luxuries due to playing blazingly fast – and one mistake can cost them the round.

TyLoo are not NiP, and they do not get away with it internationally. Sure, the never-before-seen 3-1-1 counter-terrorist setup on Mirage versus Na`Vi caught them off-guard, but it should not work again. Similarly, you can bet FalleN will have gone through their demos before SK plays TyLoo next time around. You don’t get away with being underestimated too many times – the big dogs start taking notice. And that exactly is where TyLoo’s problem lay – because they can be figured out in a matter of hours. If you cannot consistently compete, it might be better to get the occasional win with a risky style. But TyLoo are good enough.

If threat made NiP look like geniuses on anti-eco rounds by using molotovs and grenades to always clear out areas before running into CZ-75, Scout and Five-Seven stacks, TyLoo are the polar opposites of that. They show some restraint in the second round after winning the pistol, but basically run full rushes on later anti-eco rounds. These are the kind of bad habits North American teams often build up by playing against each other, and the same is happening in China – only they do not have SK Gaming to punish them for their mistakes.

On weapon rounds, TyLoo rely on simple but fast tactics, whether it be the fast middle takes on Cache or the 3-2 smoke split on Train. I consider Mirage their strongest map, but even there their most important round wins seem to come from the slow B hits through skilful picks, while their slightly modified smoke take towards A is only used here and there. Shame on anyone who loses to their Tec-9 hits on Train or Cache – they should all know what is coming. But the beauty is in that if they catch you off-guard and can out-aim you, you will have no chance – the play is so fast you will find it hard to adjust. On the contrary, if you do know what is coming, it can be too easy to stop. In effect, they are making their terrorist sides wildly volatile.

There are teams you hate to study, because they have few tells and a number of executions that complement each other. If you are playing Fnatic, you cannot always know what they are going to do – because odds are with one minute on the clock, they have yet to decide themselves. Same goes for SK and Na`Vi. Against map control teams you not only cannot give away full control, you also cannot afford to go down in numbers, or over-rotate on the first sign of action on the other side of the map. It puts a lot of pressure on the defensive team to stick to what they know, knowing the terrorists are waiting to bounce on the first mistake.

TyLoo is much easier to read, and the fact they have only run a couple of variations in recent months means you do not really need to watch out for the more extravagant options some teams run. If you can try to counter two attacks instead of five, it greatly improves your odds of guessing right. As long as TyLoo do not become more disciplined, or start playing against teams who can punish them more often, I fear nothing will change. After all, what they are doing always seems to work in China, and they sometimes do get impressive results abroad, too. But could you ever imagine this volatility winning an entire tournament?

THE EASY, OR THE HARD WAY

We should be seeing TyLoo at more events in the future, having received visas for the Schengen zone and the US. EPICENTER stated they chose invite teams who wouldn’t have visa issues, and other events have surely left the Chinese out in the cold for similar reasons in the past. Ideally, TyLoo would begin altering their style of play during their upcoming bootcamp in Europe. It is not a quick process, and could take months – but once you begin, you can refine your game even after returning home, as proven by teams such as WeMadeFOX in Counter-Strike 1.6. They simply need to get the process going against opponents who will punish them for mistakes.

But if they do not do that, they may need to lose big, before they can win big. It seemed they heavily underestimated ENCE in the IeSF grand final, and based on studying it does not seem they give much respect to their domestic opponents – who nonetheless give TyLoo competitive series, even scares. At some point, one of those scares will turn into a burning loss. Without adjustments, they run the risk of becoming what Hank Lundqvist’s New York Rangers were – a team too good to be blown up, but not good enough to win it all. Neither is optimal, and the option outlined in the previous paragraph is the better solution. But it does not mean it will be the one they take.

I cannot shake the feeling that TyLoo need one more devastating loss, perhaps domestically, before their players will commit to a change. Unlike most teams in a similar situation, they have all the pieces, only in need of fine-tuning. A lot rests on their coach Karsa, who surely knows of all the tells I saw in their game. If TyLoo can tighten up their game, they could win big – possibly in the near future. But first the mentality they can out-aim everyone needs to go. The surprise factor is gone, and now they must outplay the smartest teams in the world in other ways.