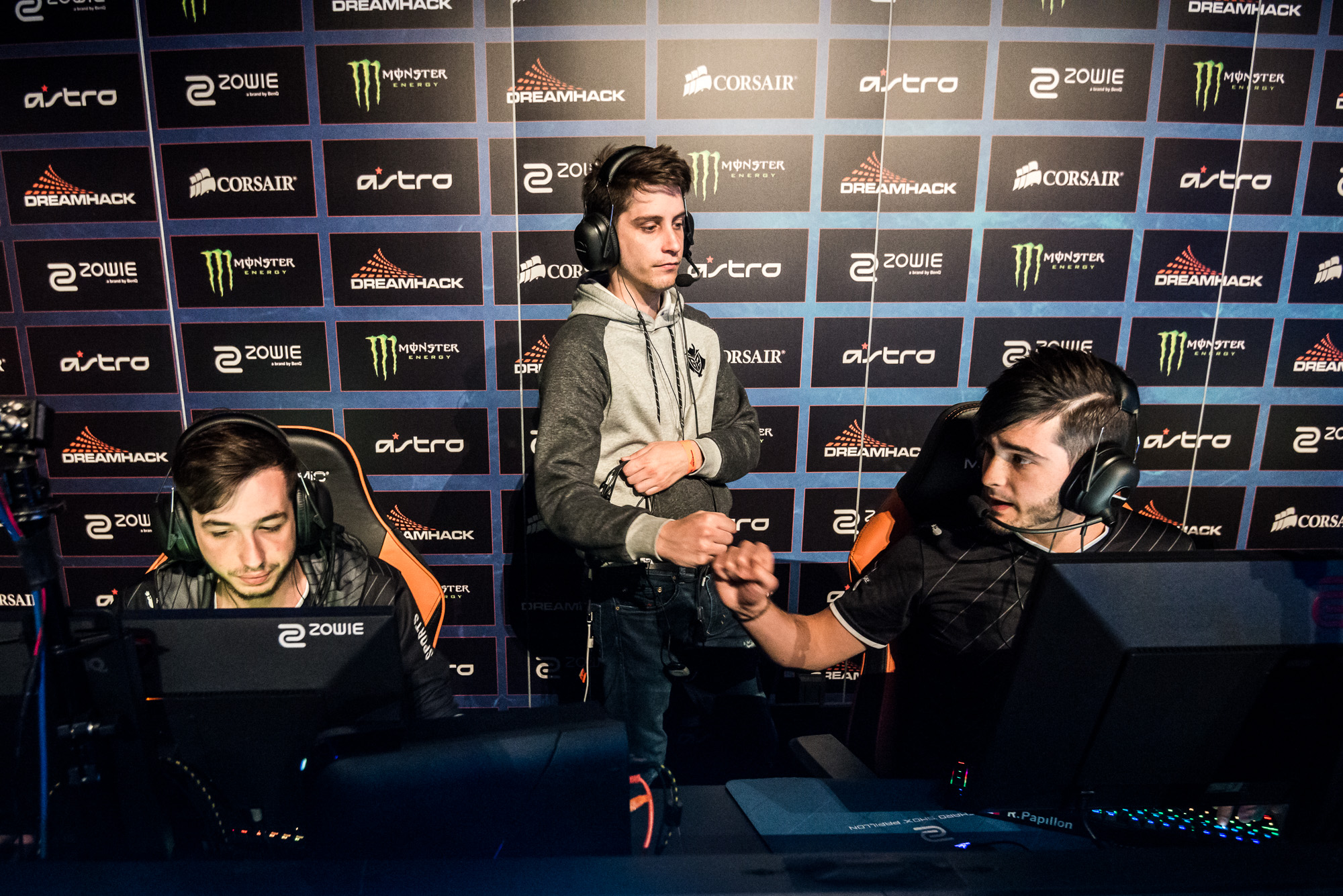 On the eve of the grand finals of the ELEAGUE Major in January, Astralis’ Danny “zonic” Sørensen and Lukas “gla1ve” Rossander watched demos of Virtus Pro. The goal was to anti-strat them on the big day and lift that Major trophy in front of a sold-out crowd in Atlanta, Georgia. They wanted to learn what moves VP would make before the Poles would know for themselves.

“[Anti-stratting them] didn’t work out [at all]…it’s only me and gla1ve who really anti-strat because the other players can’t really cope with that sort of information,” zonic later said in an interview.

Despite being down after map one Nuke, Astralis resorted back to their default setups on both sides for Overpass and Train as a response to the Polish powerhouse’s overwhelming map presence. To keep their minds in the game during the heat of the moment, zonic called several timeouts to remind the Danes what they’d studied.

This allowed players like Andreas “Xyp9x” Højsleth, to step up and drive in the winning points in monumentally clutch situations. The team didn’t rely on zonic’s calls to pull off the comeback on map three Train, and it certainly wasn’t the timeouts that got the credit. Gla1ve called the fast execute onto the A site at 15-14. Gla1ve won them the series in front of one million viewers on Twitch. Gla1ve broke their “semifinal choke” curse. It was the gla1ve show in Astralis’ first Major championship win. Zonic was just a facilitator to the result.

In August 2016, Valve essentially forced teams into a new competitive dynamic when it prohibited coaches from talking mid-game. Teams quickly needed to compile a set of players with the most well-rounded and well-versed minds the game has to offer. The change brought an unprecedented reliance on in-game leaders to call strategies and adjustments pre-round, mid-round, and post-plant. As a result, coaches, much like zonic, have taken a backseat role, advising only during tactical timeouts.

The dark ages of coaches solo demo-watching and strat-calling ended as the renaissance of in-game leading began, putting coaches into a more passive role among team structures.

Numerous cerebral tacticians eventually found their stride in late 2016 and early 2017, resulting in the so-called “Parity Era” (as opposed to “Fnatic’s Era” in 2015 and the “Luminosity/SK’s Era” in 2016.) The Parity Era describes the period after SK’s Major win at ESL Cologne in which no one single team has consistently dominated the upper echelons of Counter-Strike.

Although he was a newcomer to the former-TSM roster, Gla1ve was among the many top in-game leaders to introduce a “clinical” meta into Counter-Strike. Other leaders such as Gabriel “FalleN” Toledo, Finn “karrigan” Andersen, Janusz “snax” Pogorzelski, and even Danylo “Zeus” Teslenko also maneuvered about the meta with intellectual prowess.

In this period, hyper-strategic and methodical gameplay has become a trend, in-game leaders control the pace of the meta, and coaches transitioned into a new role among their team’s molds as an extra support player—that of moral and psychological support.

So where do coaches fit into all of this jargon?

Teams like North and Na’Vi struggle at maintaining a stable and competitive mindset when it matters the most, resulting in their early exits at events like the PGL Major, ESL One Cologne, and ESL Pro League Season 5 Finals. Neither of these rosters have won a big tournament since late 2016. But some of their fellow competitors have figured out a solution.

Zonic, G2 Esports’ Edouard “SmithZz” Dubourdeaux, and Cloud9’s Soham “valens” Chowdhury factor in moral support when their teams need it the most.

When they’ve fulfilled their traditional, old-fashioned duties, their players see them much like they would a coach in conventional sports. They’re almost like the team’s cheerleaders, acting as a driving and reinforcing voice amid the noise of the moment, while also stunting friendly banter when appropriate. They have such great faith in their in-game leaders, that they can sit back and enjoy the ride until the team faces larger roadblocks—both tactical and emotional.

These coaches all implement subtle yet effective techniques into their gameplay to elevate their team’s morale and competitive drive. Zonic pats his Danish counterparts on the shoulders, valens consistently claps behind the North Americans, and SmithZz even fist bumps each French star in between almost every round. As absurd as it sounds, these seemingly insignificant gestures can go a long way in promoting positive team behaviors, according to a study done at the University of California: Berkeley.

Research has also shown that the competitiveness of coaches in traditional sports can help reduce anxiety, and that competitive anxiety can improve situational motor skills mid-game—if players are accustomed to it. Coaches relax their players before big matches, and simultaneously, they account for possible contingencies that can adversely affect the players. If their preparation is sufficient, then coaches can alleviate and de-escalate problems with ease as they occur. This premise can be assumed to be the same if applied to the strenuous server conditions in Counter-Strike.

When teams advance their systems to fit the Parity Era meta, they’re able to elevate their level of play past what’s in front of their screen. Player aim, movement mechanics, utility usage, and team coordination can only get a set of players so far. Every kill and death position, every piece of utility, every sound cue, and every second of the clock is crucial to determining a team’s next step in their methodical tree diagrams. The apparent intensity in higher-tier matches forces competitors into crossing a psychological rift into “Parity Counter-Strike,” where consistency is fragile, tactical innovation is scarce, and a strong mental foundation is vital to success.

Teams like Astralis and Cloud9 have put such great emphasis on improving their mentality that they’ve hired sports psychologists to ease into the meta. Astralis really sits at the forefront of the “psychologist revolution,” however, which is evident from their consistent playoff runs at the PGL Major, ECS Season 3 Finals, IEM Sydney, and DreamHack Las Vegas. The Danes have also won titles at IEM Katowice and, more importantly, the ELEAGUE Major. Their psychologist, Mia Stellberg, attends events with the players and is even present with them until the team joins the server, like another coach. Stellberg is also one of the many contributing factors to Astralis breaking their “semifinal choke” curse, helping them win the Major last January.

“First, we started off working with the team spirit,” Stellberg said in an interview with Mashable. “Then, of course, I do individual work with them because all of them have their strengths and weaknesses as players.” Her intentions include improving Astralis’ mental fortitude and performances under pressure, helping drive the Danish engine behind the curtain.

Moral support coaches, however, aren’t a necessity to all teams in Counter-Strike. SK Gaming, the winners of three consecutive events prior to the PGL Major last week, opted to not employ a new coach after Ricardo “dead” Sinigaglia assumed a managerial position within the organization. As a result, SK did not have a coach behind them at the Major, and it may become a trend for events following the August player break. FalleN is now the jack-of-all-trades for the legendary Brazilian team: in-game leader, primary AWPer, support to Marcelo “coldzera” David, and apparent morale coach—an exception to the coaching meta.

The overall short-term and long-term validity of using supporting coaches has been palpable to certain extents. Cloud9 and G2’s recent performances and placements demonstrate that they’re improving in short increments. Astralis, on the other hand, have already presented how effective their overall system is through their high caliber outings throughout 2017. When supporting coaches are combined with a sports psychologist, it’s a formula for success.

As more teams conform to the model of “Parity Counter-Strike,” they may also need to comply with the meta of the mind, much like Astralis in their consistent form—with a friend behind their back and another friend in mind.