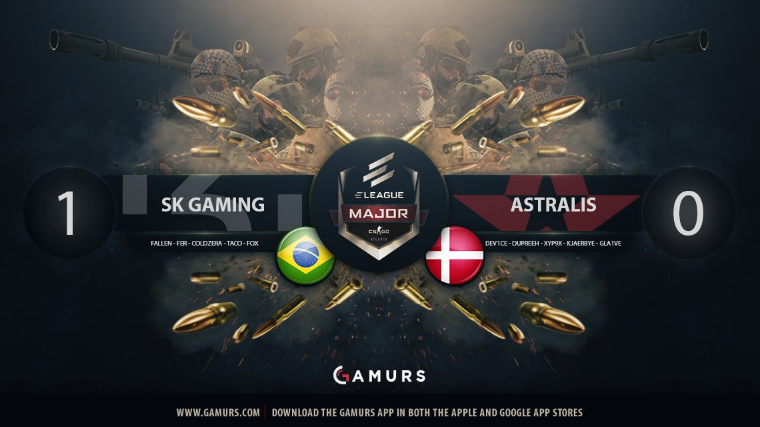 SK surprised tournament favorites Astralis on Dust II for a playoffs spot in the fifth game of day four at the ELEAGUE Major.

A dominant pistol round by coldzera and fox allowed SK to pick up their first round of Dust II. Their ensuing anti-ecos weren’t clean, but FalleN’s squad did manage to come out ahead with a 3-0 scoreline before Astralis responded by picking up the first two gun rounds of the match. Astralis then dominated SK for six rounds, allowing only one round to be picked up by SK in between; however, SK fought back from being down 4-8 to close the half out 7-8, giving them an excellent chance to even the score going into the second half.

The second half pistol round began with a push into lower dark by coldzera, where the number one player in the world picked up yet another triple kill to secure the pistol round for his team. An extremely back-and-forth second round had Astralis up in a 3v2, but a solid hold from TACO and coldzera allowed SK to take the lead for the first time since their initial three rounds. FalleN and co. then proceeded to dismantle the Astralis offense, courtesy of a stellar B site hold from TACO on multiple rounds. Astralis finally responded with a round of their own to stop SK from getting to match point, and fortunately won the following round to avoid a reset that would’ve crushed them out of the match.

Astralis, now in double digits, continued to string rounds together to bring the match to an even 14-14, thanks to a phenomenal clutch by dev1ce on B site. SK, due to a limited economy, chose to light buy and possibly concede match point. Although the round got close, Astralis was the first to reach match point. The final round of regulation came down to two phenomal kills by coldzera to stop a cat drop play onto A, allowing SK to take the match into overtime.

Overtime ensued with gla1ve picking up a triple kill, securing Astralis their first round in OT. The second round initially favoured SK, but a heroic 4k and 1v2 clutch from dev1ce gave Astralis their second OT round. The last round of the half had SK on a very limited buy, but fer and FalleN picked up two frags apiece to give SK a chance in the second half of OT.

SK proceeded to not drop a single round in the second half of OT, thanks to phenomenal clutches from fer and coldzera. SK closed out the match 19-17, securing a legends spot for themselves. Astralis will compete for their tournament life later today.