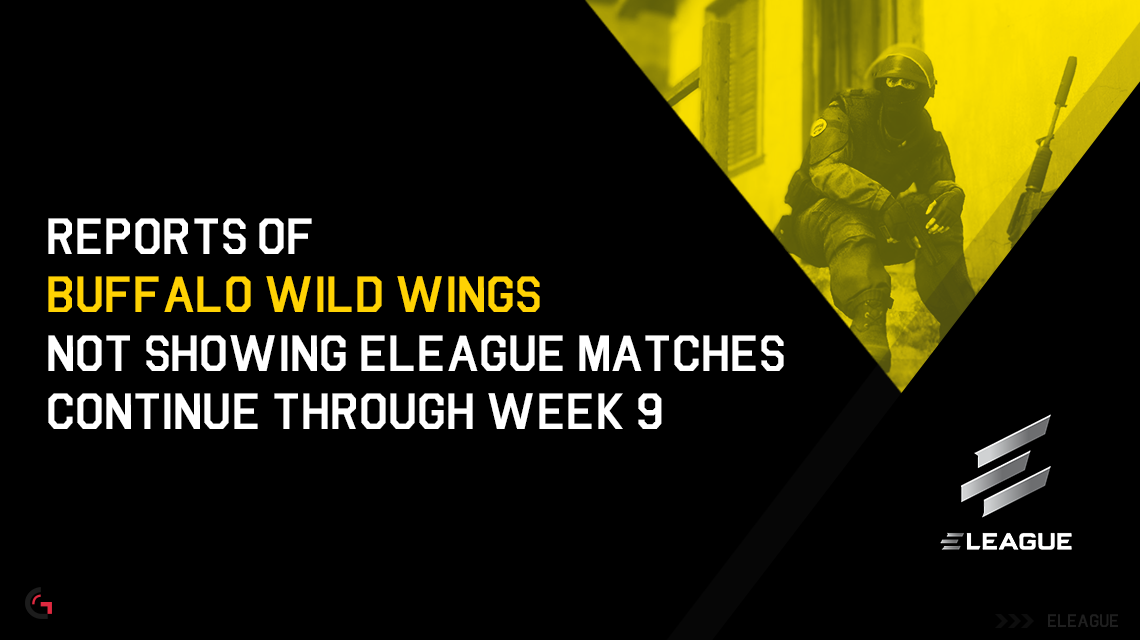 The first season of ELEAGUE on Turner’s TBS has been called a success by the company’s chief content officer, Craig Barry. The Counter-Strike: Global Offensive league aired on live television on Friday evenings. The season cumulated to a finals match between two massive esports organizations, Fnatic and Virtus.pro with the latter taking the victory.

According to Nielsen Fast Nationals Live and Same-Day data, over a quarter million television viewers tuned in to ELEAGUE, on average, during the first 7 weeks of competition. The initiative was supported by Buffalo Wild Wings, a national sports bar brand. Buffalo Wild Wings is the designated “Official Hangout for ELEAGUE Fans,” but not all customers interested in watching ELEAGUE at the establishment this season have been satisfied.

Reports of Buffalo Wild Wings failing to live up to their motto “If you want to watch it, we’ll put it on” have circulated since the first week of matches. Being that the franchise is an official partner with ELEAGUE, the weekly broadcast should be on at least one television without customers having to ask, yet this has not always been the case.

“My BWW still refuses to show it (I’m a server). Every Friday night I annoy my managers so they will put it on a couple of the [tvs] so I can watch it while I work. The only way I convince them is that I remind them that we [sponsor] the league,” reported one fan and Buffalo Wild Wings employee.

“I went last week and was told they wouldn’t show it due to guns and violence,” reported another fan. The excuse that the game is too violent to show on television seems to be a common theme, though of course the game is completely virtual. Buffalo Wild Wings has long been a major supporter of Ultimate Fighting Championship, which features mixed-martial arts fights and is likely the most violent (and real) sport offered, making violence seem like a misguided excuse.

As the nine week season wounded down, similar reports continued to surface. One Reddit user apparently went to Buffalo Wild Wings with a group of friends and had to ask management multiple times to turn on the ELEAGUE semifinals match between Virtus.pro and mousesports. Unfortunately, even after telling the staff what channel the game was on, the match was never shown.

“…they EVEN PASSED TBS WHILE CHANGING ONE TV. We ended up watching on our phones for the rest of the night,” said the user.

Multiple experiences like these led another Reddit user to create a guide on “How to get ELEAGUE on tv at BWW tonight.” The instructions say to call ahead to ask about tv availability, to ask for the Guest Experience Captain and to speak to a manager, if necessary. Specifically mentioning ELEAGUE or video games is not advised. As last resort, fans are told to remind management that BWW is the “Official Hangout for ELEAGUE Fans.”

Though reports from dissatisfied customers are not hard to find, there are still many examples of Buffalo Wild Wings giving ELEAGUE the attention it deserves. During each broadcast, tweets from fans at their local BWW establishment are aired live and “thank you” posts have made their way to Reddit. The main problem seems to be awareness, as not all BWW managers seem to understand what ELEAGUE is or have any interest in video games. Of course, these are not valid excuses, but hopefully as more and more customers make their way to Buffalo Wild Wings to watch esports, less problems will arise.

ELEAGUE has continued to achieve industry firsts as the semifinals and final were also livestreamed on Twitter’s social media platform. The brand will also expand their esports offering, beginning with the $300,000 Overwatch Open, with the final aired on TBS.

What are your thoughts on Buffalo Wild Wings locations having problems universally showing ELEAGUE matches? Do you have any solutions to fix this problem? Let us know in the comments below and be sure to follow us on Twitter – @GAMURScom – for more esprts coverage.