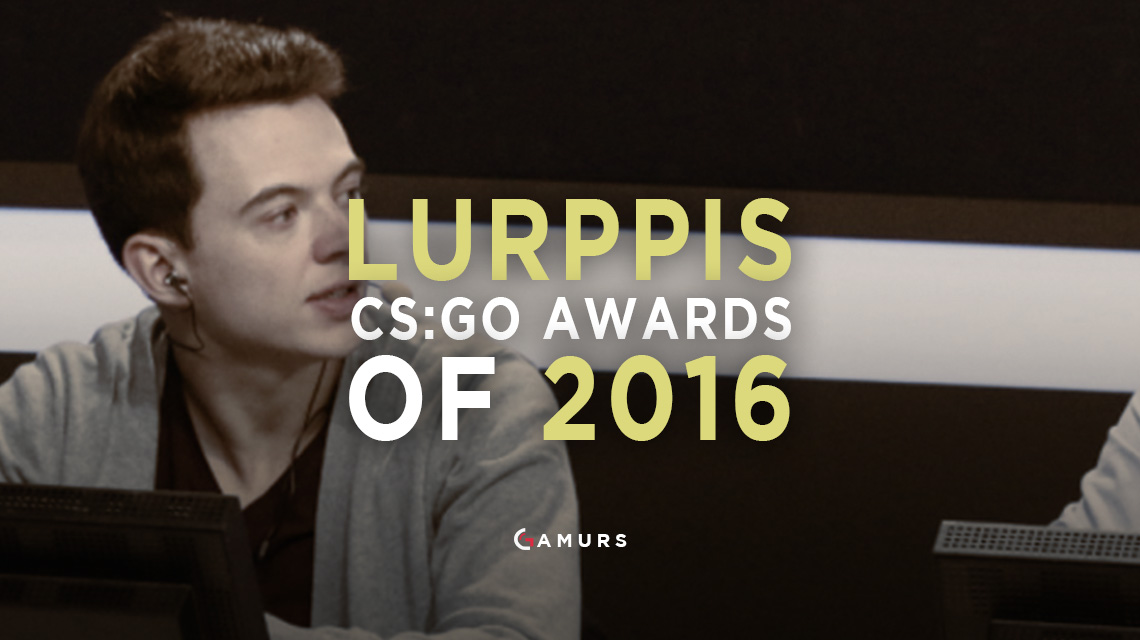 With 2016 in the books, it is time to follow up on my inaugural CS:GO Awards for 2015 article with a new edition. For the sake of continuity, I have decided to keep the same categories from last year, as I break down the top performers of what was so far undoubtedly the biggest year in Counter-Strike’s history.

THE PLAYER TO WATCH – VALDE

The 21-year-old Dane joined Copenhagen Wolves in May, but really broke through upon joining the Danish SK team, shortly after filling in for Magiskb0Y at DreamHack Open Summer. The Heroic player finished the year with a 1.15 offline rating and 0.81 KPR across 98 maps, with a signature performance in the IEM Oakland upset win over SK on cobblestone, where he put up 31 kills for +14 K-D differential, and a 1.55 rating. The only reason valde is not considered one of the top players right now is that there is no room for him in either Astralis or North (ex-dignitas), but he will not be stuck in a second-tier team forever. Look for valde to break through even further in 2017, and become a household name in the scene.

Second finisher is OpTic’s RUSH, who came to life in the final quarter of the year as the star-player in the OpTic squad that broke through with their championship at ELEAGUE Season 2. RUSH was the MVP of the event, and looked good at ECS Season 2 Finals as well. He could break through in 2017 as the next North American superstar.

ROOKIE OF THE YEAR – STEWIE2K

Given the fanfare he has enjoyed throughout most of 2016, it can be easy to forget that Stewie2K was only picked up by Cloud9 a year ago, and that for the first months his pick-up was at large considered a mistake by the community. In the past year, Stewie2K became one of the strongest entry fraggers in the game, and has gained notoriety for his clever plays in and around smoke grenades. In an addition to his individual play, he has also been the in-game leader of Cloud9 in recent months. Few players came from as little, and still got to lift a large trophy and go into 2017 as arguably his team’s franchise player, and one of the biggest fan favorites Counter-Strike currently boasts.

Second place finisher is North’s aggressive playmaker k0nfig, who lurked in the shadows early on in 2016 with Kjaerbye stealing all the spotlight, but became a key component in the two-man punch with Magiskb0Y that lifted ex-dignitas to near-elite level of play, and got them the EPICENTER championship.

Difference from the previous category is that this one includes player who were no longer rookies entering 2016. Many had their eyes on Magiskb0Y after his stellar performances online in late 2015, but in the past calendar year he finally lived up to the potential that he showcased in his legendary 35-17 performance versus fnatic at the Fragbite Masters Season 5 Finals last December. Ignoring small sample size, Magiskb0Y had the highest rating of all players at +$200K tournaments in 2016, boasting a ridiculous 1.24 rating with a +251 K-D differential and a 1.38 kills-per-death -ratio. Granted, he plays the kind of role that allows for this kind of statistics, but it is impossible to argue against how much he has improved. Considering how young he is, and how new he is to Counter-Strike, he could turn into one of the game’s biggest stars in the years to come.

Number two Kjaerbye comes from Denmark as well, and was an entirely unknown factor without any offline results to speak of entering 2016. But he exceled in MSL’s system early on with strong individual play, got picked up by Astralis in the spring and was instrumental in the Danes’ rise to the top in December.

ROLE PLAYER OF THE YEAR – XYP9X

This category is becoming increasingly hard to define properly, and as a result, its winners are admittedly by far the hardest to determine. You could make a case for number of players to be included here, but I have tried to stick to true role players, as opposed to awarding others. My pick for role player of the year is Astralis’s Xyp9x, who did well at the two majors – including a star-performance to keep the Danes’ Legends spot over then-dignitas at ESL One Cologne – and put up strong numbers at both ELEAGUE Season 2 and ECS Season 2 Finals. His numbers suffered with Astralis’s results throughout the year, but few true-role players can come close to having the kind of impact Xyp9x has on the game.

Coming in second is RUBINO, Xyp9x’s rival from fellow Danes North, or ex-Dignitas. Norwegian RUBINO is another true role player, who takes on all the unwanted roles in North, but still comes up with memorable plays at times to help put his side over the top.

IN-GAME LEADER OF THE YEAR – FALLEN

The easiest category to decide, FalleN was the year’s best in-game leader by such a wide margin there is no conversation to be had over it. He led the best team of the year, constantly getting praise from not only analysts and fans, but his peers as well. His leadership lifted Luminosity ahead of Fnatic early on in 2016, and allowed SK to repeat as major champions. While they were unable to get any titles in the final months of the year, following the prolonged off-season due to fer’s surgery, SK finished top four at each event they attended, even with fox as a stand-in with limited practice. FalleN may not be the best performing player in SK, but he is the team’s most important player anyway, a true sign of a great in-game leader.

MSL is by far the weakest link individually in North, and can be a liability at times, but remains an important part of the team purely due to his leadership. He has helped multiple versions of the lineup, and various upcoming players – including Kjaerbye, k0nfig and Magiskb0Y – reach the top. His tactics are a key component in the Danes’ success, and this break should help him revive North in top form ahead of the major.

COACH OF THE YEAR – THREAT

When DreamHack Masters Malmo finished with NiP winning what wound up being their true offline debut with pyth, I said NiP’s coach THREAT was their MVP – as opposed to one of the actual players on NiP. While THREAT has not attended tournaments with NiP after Valve’s coaching rule change, it was his system and teachings that turned the struggling Swedish team around in 2016 and allowed them to win three large tournaments. Plus, THREAT continues to help NiP in practice between tournaments. The team remains flawed and its players are nowhere near the legends they once were when they ruled the CS:GO world, but THREAT’s value-add has been unquestionable in NiP’s camp.

Second to THREAT is last year’s Coach of the Year starix, who was also Na`Vi’s in-game leader prior to the coaching rule change. While some questioned his value with Zeus on the team, once seized was forced to take over it became obvious Na`Vi were missing starix’s smarts.

SNIPER OF THE YEAR – FALLEN

In 2016 FalleN finally unlocked the same potential he showcased in the Counter-Strike 1.6 days when Brazilian fans suggested he would become the next cogu for his country. His sniping has helped make Train and Dust2 the new best maps for SK, while his dominant AWPing around the banana area of Overpass has been anchoring his team’s defense on the map. He is easily the best playmaker from all AWPers on top teams, going for picks when necessary and often opening the map for his team, even on defense when necessary. The skills of kennyS, GuardiaN and s1mple can rival him, but he is so effective in using his skillset that he has the largest impact on the game of them all, even if he cannot match them all in reflexes.

Second is kennyS, the lone bright spot in the forgettable year EnVyUs just had. By far the strongest performer on the Boys In Blue, his performance could not carry the Frenchmen to titles, but he kept them competitive during the dark days.

PLAYER OF THE YEAR – COLDZERA

While both s1mple and NiKo might have had higher peaks with hard-carry performances matching the highs of f0rest in his prime, the most consistent performer and the superstar of the world’s best team was coldzera. He has been unbelievably consistent in 2016, finishing 16 of 17 events with a plus-1.00 rating, and 15 of them with a plus-1.12 rating. He was also the top player and MVP at both majors his team won, finishing each with a 1.36 rating. He can play with pistols, is a scary rifler, and can hybrid AWP with the best of them. Furthermore, FalleN said coldzera made some key calls in their MLG Columbus overtime win over Na`Vi on Mirage. Is there anything coldzera cannot do?

Runner-up to coldzera is s1mple, whose body of work for the year is significantly much more impressive than that of his key peers NiKo or dev1ce, when factoring in team success. The Ukrainian youngster carried Liquid to top-four and top-two finishes at the majors, and was the MVP in Na`Vi’s ESL One New York win. He might also have the highest peak of all the players in Counter-Strike, and can beat anyone with any gun in the game. In so many ways, he should be destined to rule the land in years to come, but has yet to put it all together perfectly.

TEAM OF THE YEAR – SK GAMING

If Fnatic was a shoe-in for team of the year in 2015 with two of three possible major victories, SK’s 2016 is arguably even more impressive. The Brazilians won both majors held this year, won ESL Pro League Season 3 Finals, and finished top-two at five other tournaments, and top-four at 14 of 15 international events they attended in 2016. The fact that during the latter part of 2016, when just about every top team won a tournament, only makes their case easier, while SK’s main competitor in the latter part of the year, Virtus.pro, was unable to snatch a meaningful title. It is a shame SK could not go for a third major title in a calendar year due to Valve’s scheduling, and that their choice to remove fnx now effectively ruins the ELEAGUE Major for them, as they must attend with fox as a stand-in. Nonetheless, this is a year for the ages for any Counter-Strike team.

Number two is Fnatic, whose results were mediocre at best in the final five months of the year, but they held the throne for a quarter, while also finishing top-four at four later events, despite olofmeister’s injury.

In the second all-star team, GODSENT’s flusha would act as the in-game leader with kennyS from EnVyUs leading the way as a sniper. Virtus.pro’s superstar Snax would be the secondary AWPer, while mousesports’s NiKo and Fnatic’s olofmeister would share entry fragging duties. The team would not have a true role player, but given how versatile the likes of flusha, Snax and olofmeister can be, it should not be an issue as the aggressiveness of this team could make terrorist sides child’s play, and the firepower would lock down defensive halves. Plus, flusha effectively acted as a quasi-role player in the legendary fnatic team, without any real issues.

While this squad boasts a full-time AWPer and in-game leader in FalleN from SK, and three hybrid snipers in his teammate coldzera, Astralis’s dev1ce and s1mple of Na`Vi, in an all-star team it would not be an issue. The rest of the trio would be relegated to rifling, with dev1ce the secondary sniper when needed. Naturally, s1mple would be the main aggressor, together with FalleN when necessary, while G2’s shox would be filling the roles other players would not want, and coldzera would take on the passive lurker roles away from the action. Could you imagine the firepower of this all-star roster? Perhaps one day Counter-Strike, too, will require salary caps.