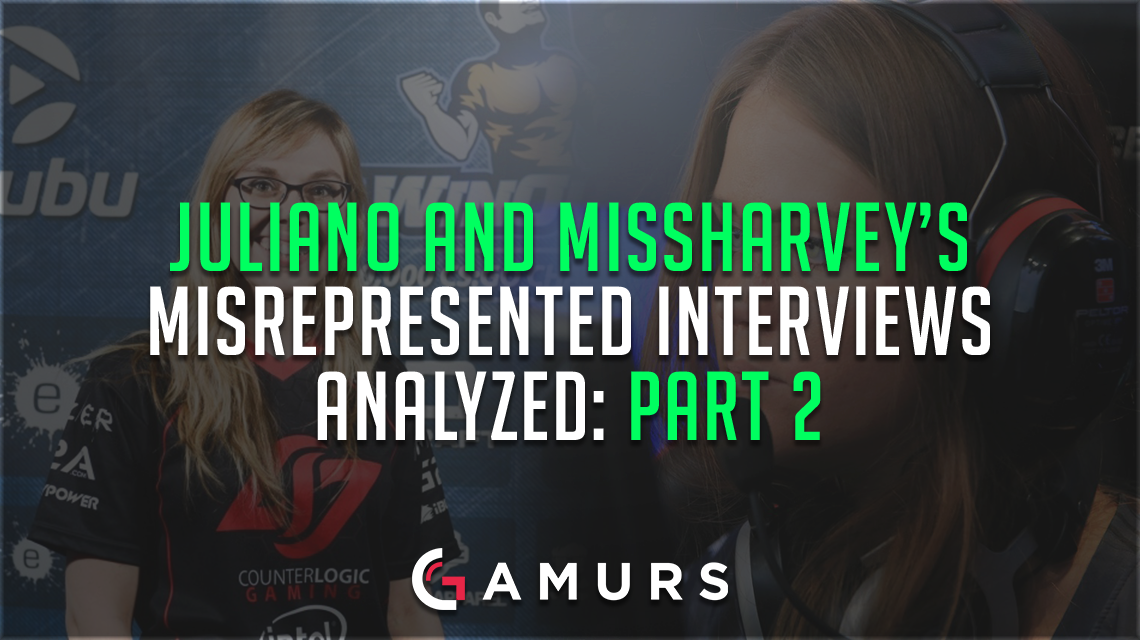 In a recent editorial published by BBC News, the issue of sexism in esports was addressed in an exceptionally poor manner. Through interviews conducted with Stephanie “missharvey” Harvey and Julia “Juliano” Kiran, the major news outlet intended on pushing an agenda portraying esports as a misogynist industry aimed at degrading the careers and aspirations of female players. Harvey is a player for Counter Logic Gaming Red and Kiran is the in-game leader of Team Secret.

This is Part Two of a two-part feature. The following will address and analyze the misconceptions evident in the video media.

A minute into the video, the phrase “sexism is a big problem in esports; female gamers feel they are not taken seriously,” is shown while melancholy tune is sung in the background. Following the screen showing these sentences, Kiran can be heard saying “That’s a big problem in general of attitudes towards female gamers, you know? They would say ‘Yeah, she’s really good for being a girl’…It’s always felt like we are not a real scene for females. A lot of the community looks at it like it’s just a side game, and that we don’t really count in the world’s top players,” Meanwhile, a quick clip of cheerleaders dancing at the eSports World Cup is shown.

This segment of the video seems to be trying to place Kiran’s attitude about the Counter-Strike: Global Offensive esports scene towards the grand scheme of the esports community. I agree with juliano about the issue of the prejudice towards female teams in CS:GO, but there’s also the issue of them segregating themselves from the “co-ed” tournaments that anyone is welcome to participate in (as long as they earn a spot by qualifying). Besides that, Kiran’s quote was inserted in that time slot in order to further the narrative of “sexism in esports” that BBC is pushing. This is the first of many times that her quotes were taken out of context. As a side note, I think the clip of the cheerleaders was thrown in to suggest objectification of females at esports events, which is not true.

After Juliano’s initial bit, missharvey mentioned, “because there’s so little female gamers in esports, it’s still a high level boys club. So, you’re automatically judged and analyzed for being different. I really believe we need strong, stubborn women to compete because it’s not easy. And still today, I’m not that respected in my community because I’m a woman.”

Throughout this excerpt, clips of men are shown in the foreground with women off to the side and in the audience. One particular clip that stood out to me involved the camera being pointed up from the ground onto the stage towards a team of guys, signifying dominance and superiority. Why would BBC want a random camera angle like that at the eSports World Cup if they’re one of the largest media brands in the world? Why else would they have small media bits of random spectators in the crowd at an esports event? (Especially since they’re not trying to get crowd reactions, like twitch streams). My assumption is that their malintent is driven by imposing a narrative that suggests that esports is openly sexist.

Later on, attendees, both male and female, of the eSports World Cup were interviewed and their answers were featured. “The majority is 90% men,” and “as you can see, there are men, men, men. If you are looking for a girl, there are not a lot,” are some quotes taken from spectators. The nastiest quote taken displayed a guy saying, “the men are a big responsibility because we were the first visually in gaming,” as FIFA (a soccer game) is being played in the background. Given the (real) context of Kiran and Harvey’s interviews alongside random spectators interviews, there’s no reason for one to follow the other. The players’ interviews were more about the Counter-Strike community, and not the general gaming community.

The next segment of the video has text that states, “female players can get a lot of attention, but also a lot of abuse.” Harvey is then shown saying, “the way I get harassed is often about how they would rape me and about what they would do to my body, and mostly about why I don’t deserve to be there because I use my sexuality. So, it’s all extremely graphic and horrible stuff.” Meanwhile, text graphics pop-up while she’s speaking and they contain obscenities of what people would say with Counter-Strike being played in the background. Yes, I agree that the abuse is a legitimately large problem in gaming, but many of the phrases, such as “you belong in the kitchen,” do not fit what Harvey was actually saying. To add onto that, the viewer can tell Harvey was cut off mid-sentence because her intonation was higher as she said “horrible stuff.”

Kiran is then featured mid-match saying, “it can be all about the looks, the fact that we are really bad at the game…” with Harvey after her stating, “I get in trouble for not having cleavage. It’s extremely toxic…It’s so hard to live through the comments and try not to read any, but it’s impossible to shut off from the attacks.” Again, Kiran and Harvey seem to be referring to the CS:GO scene and how toxic it can be online on platforms such as Twitter and Twitch, not in-person.

“There’s probably a tournament every weekend, and I think it’s going to keep rising because it’s accessible to anyone, and I think it’s going to get closer and closer to what sports are making…what we see right now is that there are millions of dollars at tournaments,” said Harvey. Kiran then said, “I think that a love of companies have realized that making esports bigger relies on getting more females into gaming. Most of the money comes from promotions and prize money, which is not that high. I wish there were no gap between males and females because it’s a game. It will be cool to see something that male and female genders are working together on.”

The leading conclusion by Harvey seems to hint to a topic unrelated to the theme of “sexism.” She’s acknowledging the growth of esports into a mainstream aspect of everyday life. Kiran on the other hand, is implying the presence of a wage gap in the CS:GO esport. To her oversight, this is only apparent because of the existence of female-only tournaments. I touched on this more in Part One of this feature series.

As a message to BBC, if you’re going to attempt to defame gaming and esports because of misconceived ignorance and few bad apples, at least do so in a way that isn’t subliminally obvious. Many of us aren’t unintelligent, blind followers of propagating media.