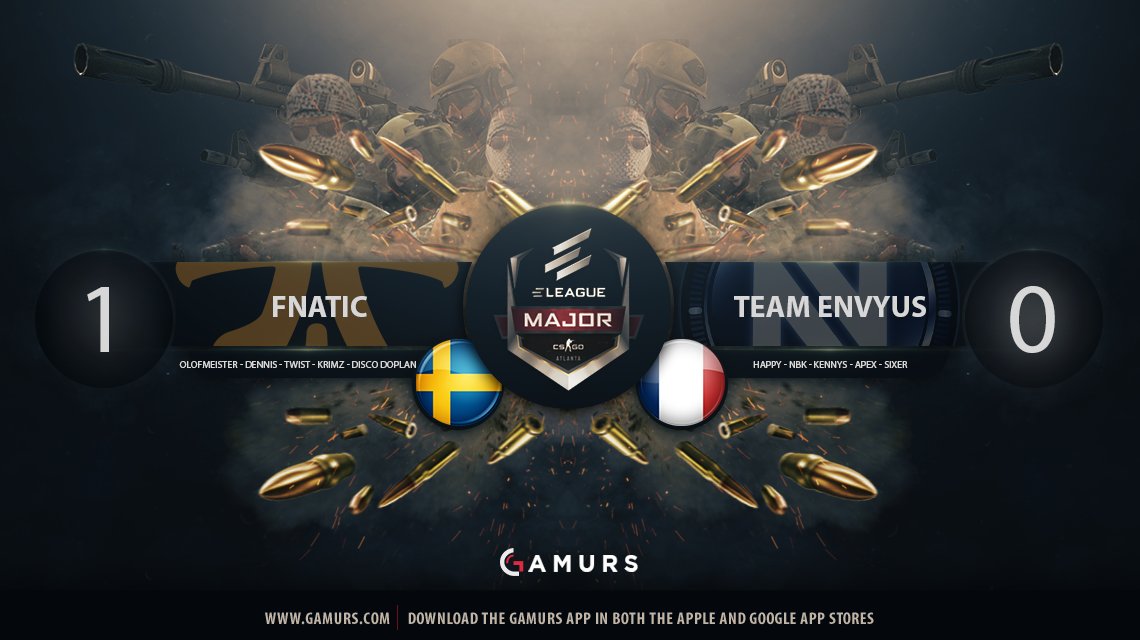 Our first 2-1 match of the day saw former major champions EnVyUs and Fnatic duke it out for a legends spot, and a place in the playoffs.

The match began with EnVyUs on the T side of Cobble, and Fnatic starting on CT.

The pistol round was opened up by a frag from KRIMZ, but was quickly replied to with frags from kennyS and Happy; however, the rest of the round was dominated by Fnatic as olofmeister, disco doplan, and twist all chimed in to put Fnatic on the board.

Some relatively sloppy anti-ecos put Fnatic at 3-0. The first gun round saw NBK- get three incredible entries on B platform, effectively ending the round immediately. Dan “apEX” Madesclaire also contributed with a frag on twist, and Happy closed it out – a clean first gun round for EnVyUs.

Due to the sloppy anti-ecos, Fnatic was forced to save on the following round, but two superb Desert Eagle kills from olofmeister made the round possible for disco doplan, who swept in to pick up a 1v2 clutch and put Fnatic right back into the running.

Despite a triple kill by kennyS in the next round, twist was able to defeat him in a 1v1 post-plant, and won the round by picking up a kit in transit towards the bomb to put the score at 5-2 for Fnatic.

The next three rounds were picked up in rather quick succession by EnVyUs, as Fnatic had to eco once again – every gun round had been exceptionally close between the teams, and they had yet to build any economy up.

A triple kill by twist put Fnatic in an amazing position to win their next gun round, but some stellar refrags by apEX and kennyS forced olofmeister into a 1v2 – which, in classic olofmeister fashion, he won.

The scoreline was equalized by EnVyUs the following round thanks to three marvelous entries by apEX, accompanied by kennyS chiming in for a frag. Once again, due to the rounds being so close, Fnatic’s economy was crushed. Most of them chose to force into the following round, as they would be on a double save either way.

The one silver lining from their force round was that olofmeister managed to save an AK, which he used to get an entry on SIXER in the ensuing round. Unfortunately for olofmeister, the rest of his team only had pistols, and they couldn’t convert olof’s entry into a round win.

The half was closed out by KRIMZ, who once again showed why he’s considered one of the best clutch players in the world, as he took down kennyS to make the scoreline 7-8 for Fnatic.

A dominant T side pistol from Fnatic allowed them to immediately tie up the score, losing only a single player in the round; however, a force buy from EnVyUs proved to be a success as they closed the round out with a team ace, only dropping apEX in the process. A triple kill from apEX shut down Fnatic’s force buy in the following round, allowing EnVyUs to sit comfortably at 10-8 scoreline, and forced Fnatic to eco.

apEX continued his amazing form by picking up four kills in nV’s anti-eco round, putting him up at a 23-12 scoreline.

Fnatic replied back on their first proper gun round with KRIMZ and dennis picking up two frags apiece – including a 1v1 clutch by dennis versus Happy.

Two great entries by olofmeister and disco doplan put Fnatic in a great position to win the next round, but a triple kill by SIXER gave EnVyUs a chance to pick the round up as well; unfortunately, those three kills were the only ones that were picked up by EnVyUs in this round, and Fnatic proceeded to tie up the scoreline by winning the following anti-eco.

The 23rd round marked the third gun round of the half, and Fnatic proved to be too strong of a force as olofmeister, dennis, and KRIMZ all contributed to taking the B site, allowing Fnatic to finally pull ahead of EnVy at 12-11.

EnVyUs failed to put up much of a fight in the following two rounds, and Fnatic pulled ahead, now just two rounds from closing out the match.

A stellar two-man spray from dennis on B site opened up the next round for Fnatic, and twist and KRIMZ chimed in for a frag each to take the site. Happy was forced to save, conceding match point to Fnatic.

The final round of the match was decided by two amazing entries with the AWP by twist when they were down 2v3, allowing Fnatic to close out the match and regain legend status.

EnVyUs now have a record of 2-2, and look to win their last match later today to make the playoffs.