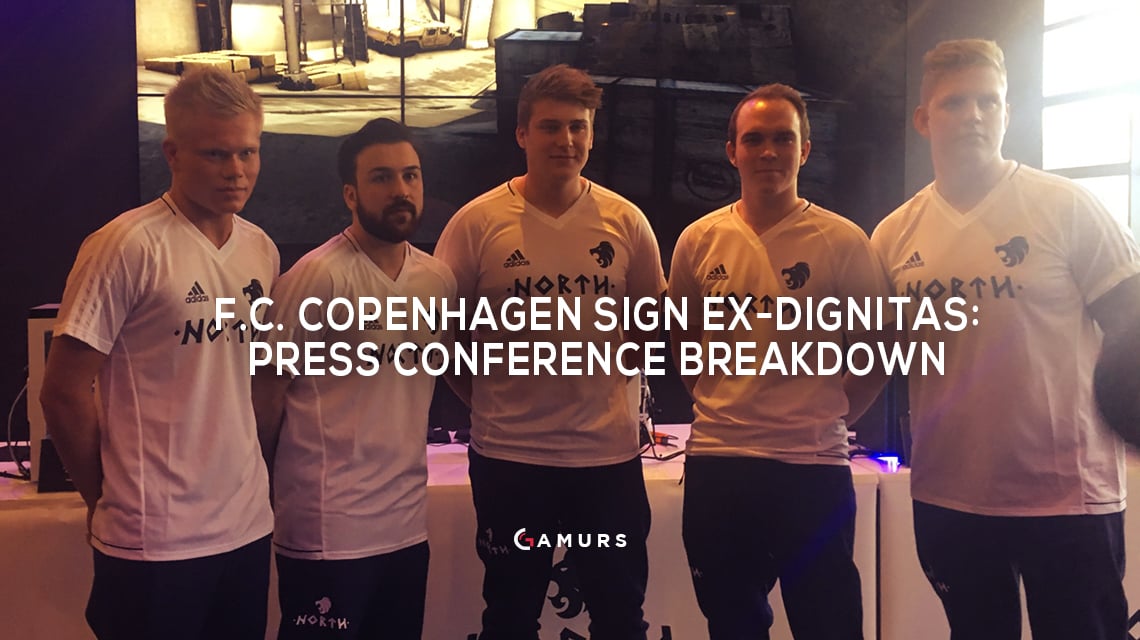 As the biggest Danish media outlets have gathered in Telia Parken (home turf of F.C København [Copenhagen], the biggest football club in Denmark), the organization behind the new esports team “North” have put out a statement saying that they want to be one of the biggest esport brands in Europe. They back this up claim by signing the former Team Dignitas CS:GO lineup to their ranks. The team itself was not announced in person, but through a video showing the lineup. Despite not being highlighted personally, they were present at the press conference and they were available for one-on-one interviews with the general press afterward.

The companies behind the new esports team are FC Copenhagen, but also the two big media conglomerates Nordisk Film and Egmont Media. They will be looking to produce media content and create events around the organization’s players.

At the press conference, the newly appointed CGO of North (former DOTA pro player, Maelk), representatives from FC København and the media companies opened up to journalists and answered a bunch of questions (some more knowledgeable about esports than others). Here are some key quotes from the press conference:

“[…] the companies behind will invest millions of Danish Kroner into the project.”  (Basically, it will be between 10 million and 99 million)

“We want to go out and dominate internationally, and we also want to add more teams – specifically in games like DOTA 2 and FIFA.” – Jakob “Maelk” Toft-Andersen

“In 2018 we want to bring one of the biggest Counter-Strike tournaments to our stadium, Telia Parken. The ambition is to fill the arena with our max capacity, which is 40-50,000 live spectators.” – Anders Hørsholt, CEO of FC København

“The ambition is not to build a strong danish league. Our focus is the international, global market.” – Anders Hørsholt, CEO of FC København

“Esport is sport. The players work in an environment focused on performing at a top level and matching against the best. That is why I think it is a sport, and that is why we are entering now.” – Anders Hørsholt, CEO of FC København

“In 2017 our goal is to be top 3 in the world for Counter-Strike and add new teams to our brand.” – Anders Hørsholt, CEO of FC København to DR Nyheder

Are you excited for North’s future under F.C. Copenhagen? Let us know in the comments below and make sure you follow @followrizc on Twitter, as he helped us with this news piece.