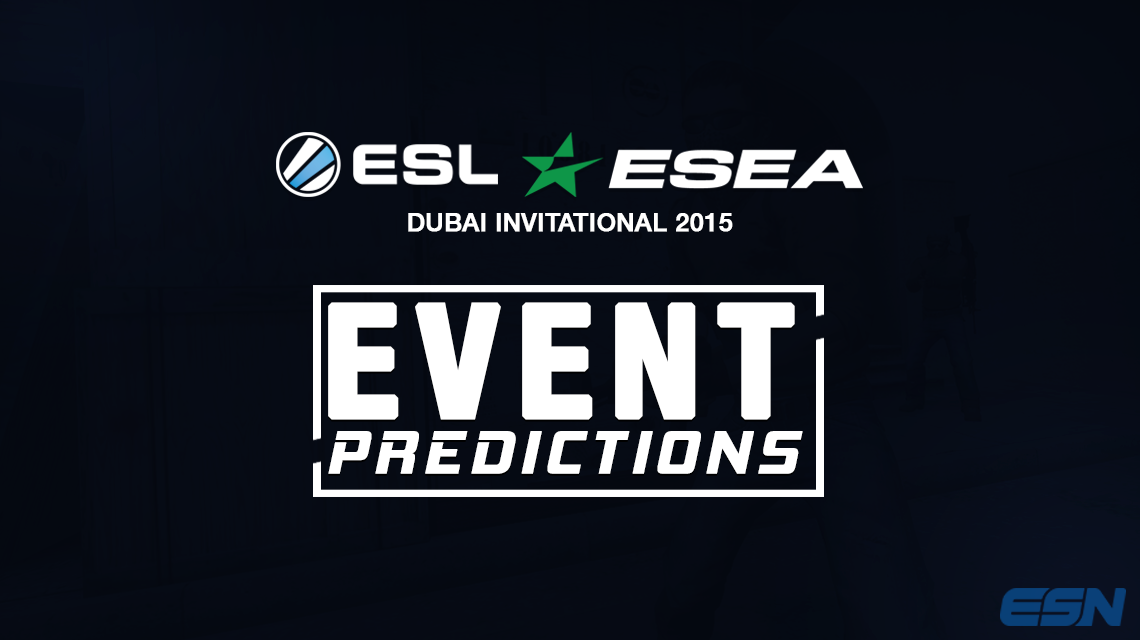 The ESL ESEA Pro League Dubai Invitational , a Counter-Strike: Global Offensive event with a $250,000 prize pool, will be held this week on Sept. 10-12. Although this isn’t a major event, it will be a great test for the teams to see who is on top.

Note: Look out for the people who are italicized.

Currently held as the best team in the world and coming off a fantastic, history-making ESL One Cologne victory, this team surely has high caliber expectations to live up to. Entering Dubai they will be the clear favourites to win this event. They have arguably the best player in the world, Olofm , playing for the Swedish giants and have others like KrimZ, JW and Flusha who can carry a game at any given time.

When it comes down to playing best-of-three series, FNATIC are always the favorites with a seemingly never ending map pool, unbelievable skill, and the power to come back in any match when it looks like they will lose. To win this event all they have to do is play like they did at ESL One Cologne.

At IEM Gamescom , EnVy dominated Team SoloMid in a best-of-five with a score of 3-0 (however these were EnVy’s best maps). This lead people to talk about how this French side could be the next elite team. At ESL One Cologne, EnVy came in swinging and won against Na`Vi in a very impressive fashion with a 2-0, beat TSM 2-1, but lost to FNATIC 0-2 (although the first map was a historic comeback and the second a white wash).

Although this team hasn’t been together for long, it is proven they can play against and best the best. Similar to FNATIC, any player in this lineup can carry his team to victory. All of these players are top quality and have been carry players in former teams as well. A downfall to this team is their map pool as it seems to be shaky, being unable to play Train, Overpass and Mirage, hurting the potential of this squad. None of this matters when it comes to man-to-man ability though, no other team can match up.

The biggest downfall in this tournament is their teamwork and synergy. If they can get over their synergistic problems they can take ESL ESEA Dubai.

A controversial pick and a hard one to do myself. The reason I give VP the third chance to win this event is due to their recent form. At CEVO 7 LANs, we got a taste of their form when they beat Na`Vi in the finals with a convincing fashion, but doubts were still there. At ESL One Cologne the mythical Virtus.Plow mode activated and gave FNATIC a run for their money.

When it comes to current form; VP seems almost unbeatable, this is a very scary team that can never be counted out. Their talent is nothing less that amazing and the polls are fascinating to watch. When it comes to map pools, Virtus can play almost every map just not up to the skill of TSM, however they specialise on some lesser played maps, such as Cobblestone, Train and Overpass.

To win Dubai, VP will have to play lights out and beat FNATIC, but that is possible as seen at Cologne with the very close loss.

As of late, TSM have not been playing well. At ACER Predator Masters they absolutely bombed out with a top-eight finish. Everyone shook this off as one bad event. At IEM Gamescom though, TSM lost every map they played against the newly formed Team EnVy. As expected, this would add to the doubts but yet again get shrugged off as for maybe the reason being saving strats for a major. Then at the last major, TSM had a very shaky performance against the Australian team, Renegades (16-11 on Train). And lost to EnVy in the semifinals 1-2. Making their exit from the major, placing third-fourth.

This team has the second biggest map pool, with FNATIC having the biggest. They can compete with any team, however, as of late their star player Device has been under performing. At the major, Dupreeh, arguably their second best player, was shaky too. Maybe the choking is still around, how will TSM fair at a $250,000 event?

For TSM to do well, they need to stay calm and simply hit their shots. If they can do that, the Danes would probably be the second favourites to win.

Similar to TSM, the past few events for Na`Vi have not been so great. The squad have been not performing well leading up to this event. At ESL One Cologne, Na`Vi had arguably one of the worst performances with this lineup. Hopes were very high for this well-built team, and everyone thought they could at least make it to the semifinals. Surprisingly, Natus went out in the quarterfinals in a shameful 0-2 loss.

Competitively, this team has a decent map pool. They refuse to play and veto cache all the time and are weak on some maps. When this team is on point though, they can easily be a top-two contender.

For Na`Vi to win; they have to be in-form and that means Guardian needs to hit his shots and the deciding factor, flamie, needs to do well if this team wants to go far. It has been a few events but it is definitely possible. Never count Na`Vi out.

This is one of the most interesting teams to look at competitively. The Americans can more or less compete with anyone on a good day. In matches with TSM and Na`Vi they have played them very close.

For C9 to win, a few factors are at play. A bit of luck, having an easier road to the grand finals and not playing Team Virtus.pro, because they seemingly always lose against them. To face EnVy or TSM will be a killer for this growing team. Another problem would be preparation time because this team is very reliant on Sgares countering their opponents; he has to watch many demos to see what the other teams usually do. If n0thing performs like he did at the Electronic Sports World Cup 2015 , Shroud and Freak play like they did at ESL ESEA Pro League , and [email protected] like he did at ESL One Cologne, this team can pull off some huge upsets.

This team is currently a shadow of their former self. This team is a jack of all trades, master of none. They can play most maps but don’t have a dominant one. When it comes to players, each can step up and have done so in the past few months, but not at the same time.

At ESL One Cologne, both f0rest and GeT_RiGhT played consistently in contrast to the rest of their team. At ESWC, firberg played well. Allu always does decent and Xizt can definitely frag. NiP’s biggest problems are not being able to play well at the same time, adjusting their games to the new eta, and having strong tactics. They have only had one best-of-three victory against a top-ten team in months, and that was against Dignitas.

This team would need nothing less than an absolute miracle to even get to the semifinals.

It’s quite interesting to see Titan at this event, considering there are higher ranked teams that ESL could have invited, like mouseSports and Kinguin. They are here though, so it is time to address their potential. The performances of this team have been pretty low lately; however, they have an unknown factor but way too little skill (with their 4 support players).

Their map pool is unknown and probably not good, because this is a fairly new team. If this team has any chance of winning, Shox will have to go to his former beast mode like he did with Verygames. This team needs a bigger miracle than NiP and that’s saying something.

Who do you believe will win the ESL ESEA Pro League Dubai Invitational for Counter-Strike: Global Offensive ? Let us know. Stay up-to-date with event coverage over at our Twitter – @ESNCS .