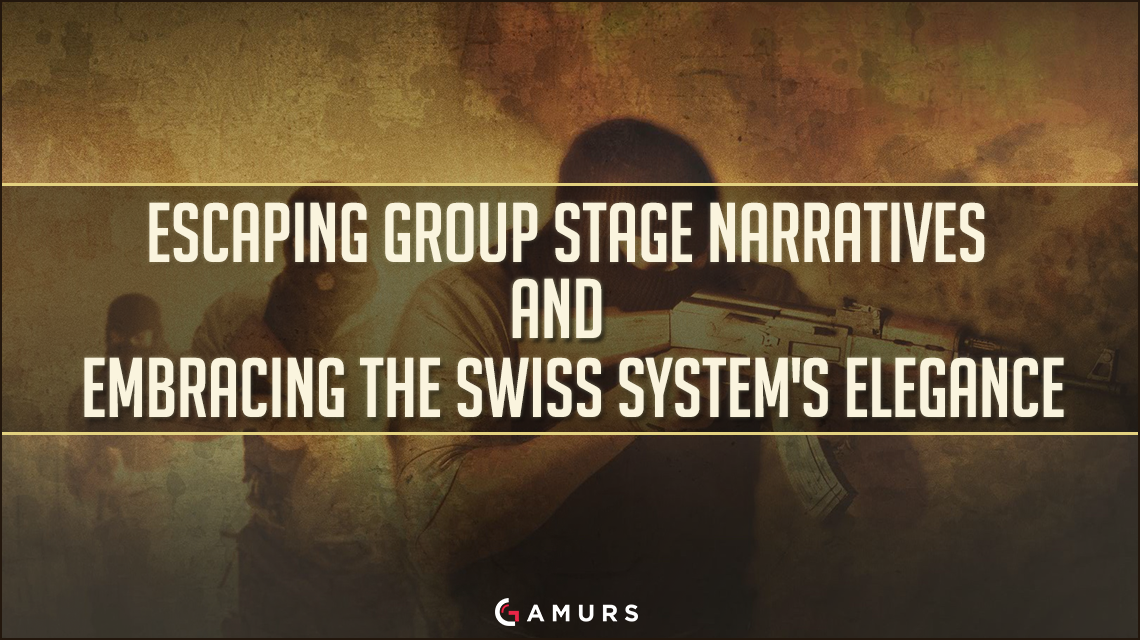 Note: This article assumes you understand the workings of the Swiss System, if not, read here.

One of the biggest Counter-Strike: Global Offensive events of the year begins on Sunday. But there’s something curious going on in esports media; all of the group stage prediction articles that usually flood the “new” section of reddit are missing. That’s because the ELEAGUE Major is replacing the traditional group stage format with a swiss system, and these formulaic pieces are impossible to write without a group stage. What we lose in punditry, however, we gain in narrative; no format weaves more compelling stories than the swiss.

The group stage format has a natural inclination for every possible outcome of every group to be analyzed and played out in the minds of fans before the first round even starts. Each group only contains four teams, and the matchups are easily sketched out beforehand. An important chunk of the tournament’s story is enclosed in a limited amount of possibilities.

In most cases, this leads to the group stage standings being universally agreed upon beforehand, making the upset results far more shocking, but the expected wins far less. For example, Group B at ESL One Cologne 2016 saw Flipsid3 upset Ninjas in Pyjamas in a community-shattering way. But Na`Vi went 2-0 without a fuss.

Trying to create an exciting story out of a group that doesn’t have an exceedingly rare upset is nearly impossible when that story has already been torn apart by analysts and fans. This is what the swiss system changes so elegantly.

You can still make concrete predictions, but after the initial bout of games, the narrative possibilities splinter into thousands. Teams have to – after their first game – constantly play against another team with the same record. A clean 3-0 escape from groups is no small feat, just as a close 2-3 group stage exit can break the hearts of any fan. Each win also creates a shift of power that is totally non-existent in the group stage format.

The ELEAGUE Major Qualifier used the swiss system, and this power shift was perfectly demonstrated when G2 Esports and Immortals met in the final round of matches. This was possibly the best game of the tournament and was done through the system naturally pairing them together after they both beat weaker teams and lost to stronger ones. The only way a group stage could’ve achieved this would’ve been through luck-of-the-draw seeding.

This all creates a format perfect for creating tournament narratives. The story is created as the tournament progresses – free of much of the hard analytics of group stage play.

The swiss system is also free of any preparation bias outside of the initial bouts. Group stages have a preparation bias in spades. Watching group stages is watching teams that have intensively prepared for each other weeks in advance. Pouring over demos, creating anti-strats, and breaking down every possible facet of their enemy’s play to make it out of groups… only to fall quickly in the playoffs to a team they couldn’t prepare for. A team that undergoes this preparation and plays in groups is a modified version of that team. This is, in contrast to the swiss system, where this type of intensive preparation is only valid for the first round of games.

The swiss system almost forces teams to play their own style. There may be gaps to prepare for opposition the following day, but these are measured in hours, not weeks.

The lack of preparation lends itself to teams playing more to their own strengths, rather than the weakness of their opponents, which as a result, can lead to more solidified map pools and higher confidence in the team’s own ability to win games. This focus on a team’s self isn’t valuable enough to completely outweigh the lack of a best-of-three, but with as many as five games for a team to prove themselves and the increase in narrative potency, there is at least a relative trade-off.

The swiss system has been used twice in CS:GO, and in both situations, it resulted in the creation of diverse narratives that would’ve otherwise been unachievable with the group stage format. At ESL One New York, OpTic Gaming eliminated both G2 and Astralis in devastating fashion before their nail-biting, 16-14 loss to Virtus.pro resulted in their exit from groups. This couldn’t have happened in groups. Their two losses to Fnatic and SK Gaming would’ve resulted in an early group stage departure.

The ESL One Cologne qualifiers had a similar scenario, with Flipsid3 proving to be a neon green, dream crushing machine, crushing favorites Immortals and HellRaisers on the last day of play. This confirmed the idea of Flipsid3’s wonderfully strange pattern of peaking in major qualifiers in a way that couldn’t have been done via a group stage.

The swiss system isn’t easily explained, and it’s difficult to schedule across multiple days. There are legitimate concerns over the lack of a series win to get out of groups. But for those that love a story, you can’t beat it.

Written by Max Melit who can be found on Twitter @max_melit or be contacted through email: [email protected]