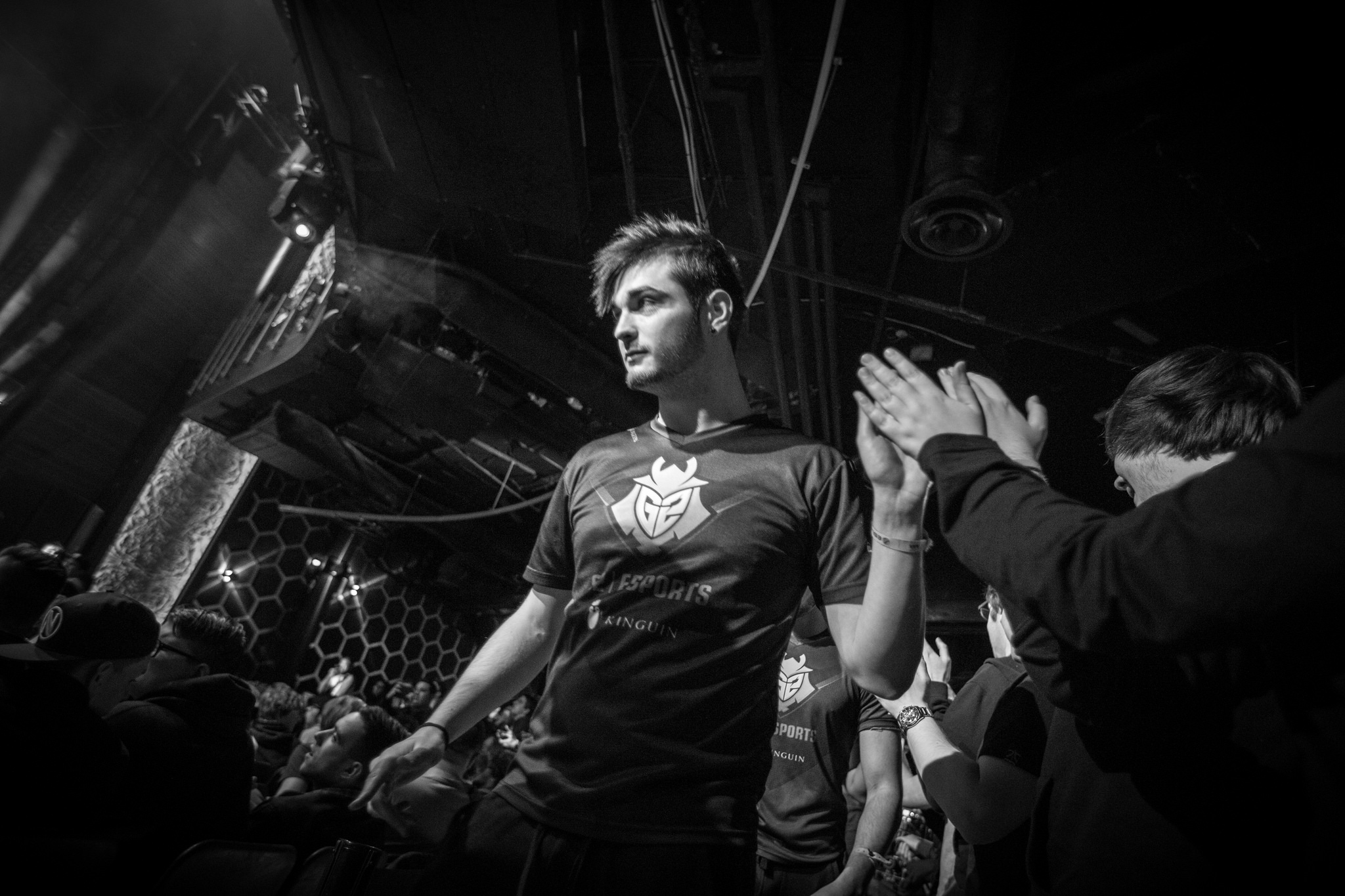 The past weeks have arguably seen the Counter-Strike scene go through the craziest silly season we have seen to-date in the game’s history. Roster changes always happen at the end of the year, and post-majors, but Valve’s roster lock system forced many teams to stick to their lineup past its expiration date. That, combined with many contracts running out on Jan. 1, led to the madness of the past two weeks. In fact, more than half of the teams from the ELEAGUE Major in Atlanta that finished on Jan. 29, no longer field the same roster. This article sets out to rank what I deem as the most relevant of those roster moves.

In a very surprising move, the lone Norwegian of the former Dignitas team, RUBINO, chose to leave the squad following a disappointing top-eight finish at the ELEAGUE Major. On some level it made sense for North to go fully Danish, picking up the player who stood in for RUBINO at WESG’s European Finals last fall, though it does not even begin to explain RUBINO’s rationale for leaving a highly paid and successful team, where he was a contributing member – one who will be missed. There is little doubt aizy is a stronger player individually than RUBINO, and as long as MSL is leading the team, they will need all the incremental skill they can get. But RUBINO had his fair share of highlights, played the roles no one else on the team wanted, and was a solid player in clutch situations.

There is a universe out there where aizy’s North never becomes as successful as RUBINO’s Dignitas, though that would not obviously be entirely aizy’s fault. This move makes sense for North, and adds to their potential… But remains far from the slam dunk many are making it out to be. Still, Magisk and k0nfig will face less pressure, a factor that could help the latter rebound after a poor showing at ELEAGUE Atlanta. If you are North, it is probably a move you make in a vacuum, even if RUBINO does not insist on leaving, but it also carries risk, considering how reliant on tactics and team-play MSL’s most successful team has been. If you are a North fan, hope that aizy can plug all the holes, but the task will not be easy.

While it does not seem like there are in-game reasons good enough to warrant stanislaw’s choice to leave OpTic, and Hiko is nowadays an underrated player given his roles in Liquid, there is no question he is exactly what the doctor ordered for EliGE’s team. Liquid has lacked leadership since… forever, and stanislaw should be able to bring in just that. With Valve’s coaching rule, zews cannot lead the team full-time, and it is entirely possible that stanislaw will be able to learn from the former SK coach to become an even better captain – though there is little visibility to the previous OpTic roster, and what kind of a leader he actually was, aside from doing well in the kills-column.

Unfortunately, Liquid seems like a ship with so many holes that stanislaw is unlikely to plug all of them at once. The Pimp Experiment™ has not been much of a success, nitr0’s level of play has been mediocre at best, and jdm64 has not been consistent since s1mple’s departure. In fact, the only bright spot in Liquid’s play has been their young star EliGE. But if you are Liquid, picking up stanislaw is a steal – also because it hurts your direct competition in all national qualifiers – and you want to do anything to make EliGE happy while trying to figure out how to make the Counter-Strike experiment into a good team in the post-s1mple era.

One of the worst kept secrets in the scene, SK finally officially added former Immortals star felps into their roster after the major. Apparently, the plan is to allow felps to continue his aggressive style of play, with fer scaling up a bit to make room for the youngster on defense, while TACO may be taking on less entry duels in the future as a terrorist to let felps work his magic. In a way, this move is a lot like Astralis’s trade of cajunb for Kjaerbye – it might not make them better right away, but long-term, it is a great move that should definitely pay off in results – aside from the out-of-game issues that led to fnx being replaced so swiftly in the middle of the tournament season.

SK’s roster is so skilled and capable of making plays that it is hard to say anyone is favored against them going into the next events. But the reason this move is not ranked higher is that SK was so good even with fox, that they nearly made the grand final of ELEAGUE Atlanta. FalleN’s team is the definition of elite, and should be contending for all titles in 2017 once felps is on-boarded properly. The key question is, will the entire roster be happy, and successful, in their new roles? Similarly, how long will the process of getting everyone accustomed to felps being the main aggressor be? Will SK already win in Las Vegas or Katowice? In any case, the fact that those are the questions we should be focusing on says it all about how good this team is destined to be.

Losing aizy should have been a hit to FaZe’s roster, but instead, they turned the Dane’s departure into a home run. NiKo has not been in the kind of form that warranted analysts calling him the best player in the world in early 2016 as of late, but that likely had a lot to do with the inadequate supporting cast that mousesports sent him to war with. This FaZe team is a wet dream for the player who has needed to do everything just to give his side a fighting chance. Do not believe it? Well, it took a gargantuan 42-28 K-D difference and 1.59 rating performance simply to drag the group of bodies mousesports fielded at IEM Katowice last year to overtime with Fnatic. On FaZe, NiKo will be next to the likes of rain and allu, with no denis or Spiidi in sight.

Almost directly after joining, FaZe’s in-game leader karrigan made the team better – no question about it. But now he faces a new challenge in fitting in a true superstar, someone who others must make room for in order to get the most out of his explosive potential. It is up to the former Astralis in-game leader to make sure NiKo fits in, and to get results out of the roster. FaZe has been steadily improving since the Dane took over the reins, and should not have too many issues fitting in NiKo. The Bosnian will not be playing for FaZe in Las Vegas, and cannot be prepared in time for IEM Katowice, but from that point on, other teams need to watch out – they would have had all rather kept NiKo locked in mousesports. Now, consider him unleashed.

shox and kennyS unite under G2 in another French shuffle

Finally, the most wanted French player combination has arrived – shox is playing together with kennyS in the latest version of the top French team. ScreaM and shox had a good run together on G2 as they won ECS Season 1 in London last June, whereas the EnVyUs team flat out flopped through the entire 2016 – safe to say kioShiMa was not the (only) problem. This roster finally combines the country’s two best players with star-role player NBK and best entry fragger apEX, with promising youngster bodyy rounding out the team. It has all the skill you could ask for – aside from ScreaM, who destroyed G2 by himself last week – but could find itself struggling when it comes to leadership.

With no Ex6TenZ or Happy in sight, G2 will have to rely on shox. The French superstar has proven he can lead a team to championships, and play like a star at the same time. But he has never had a prolonged period of success as the in-game leader of the team, prompting some questions as to how this team will deal with adversity, or make quick adjustments in the middle of what will be an incredibly packed tournament schedule in 2017. I would not count G2 or shox out, though – that would be ridiculous – but it is a factor to keep in mind before giving them their fair share of the titles, before any offline matches take place. The French scene has struggled to keep consistent rosters, even in the days of the large contracts, and it remains to be seen whether this iteration of G2 will be the next big thing, or simply another very good team.

Fnatic and GODSENT revert their swap to bring back Fnatic 2016

Before you go on, read stuchiu’s “the rise and fall of the Fnatic empire,” and only then resume here. The Fnatic roster broke up six months ago due to – only by their standards – weakening results, and some internal issues. In their last events, Fnatic placed top-four at ESL One Cologne, and second at ELEAGUE Season 1 – and that was with olofmeister seemingly still recovering from his injury. This Fnatic roster dominated the Counter-Strike world from the moment dennis joined in late 2015, winning six straight tournaments in a row until olofmeister’s injury saw him unable to play to his usual level – or anywhere near – at MLG Columbus. The Swede then took a lengthy break from the team, and they never recovered – again, per their standards. Just about any other team in the world would have killed to get the results they were getting.

The last six months were a reminder to the players of how fleeting success can be. Neither GODSENT with flusha and JW, nor Fnatic with the trio of olofmeister, dennis and KRiMZ, were able to score any meaningful results in their time apart. In fact, KRiMZ only lasted a short time in GODSENT before orchestrating a trade back to the black and orange. It should take some time for a new team to click, but the style of Fnatic could actually work from the get-go, without plenty of practice – and the early signs of online play are promising. This is a team that should scare everyone in the Counter-Strike scene, with potential to win any event they attend at any point. In an era of tactics regaining importance, look for Fnatic to try to shift the meta away. They boast the skill, the teamwork, and the experience – and could well become world champions.

Many of these rosters will have their debut in the coming days at DreamHack Masters Las Vegas, though NiKo’s debut with FaZe will not take place until IEM Katowice in early March, and the new G2 roster failed to qualify for both events.