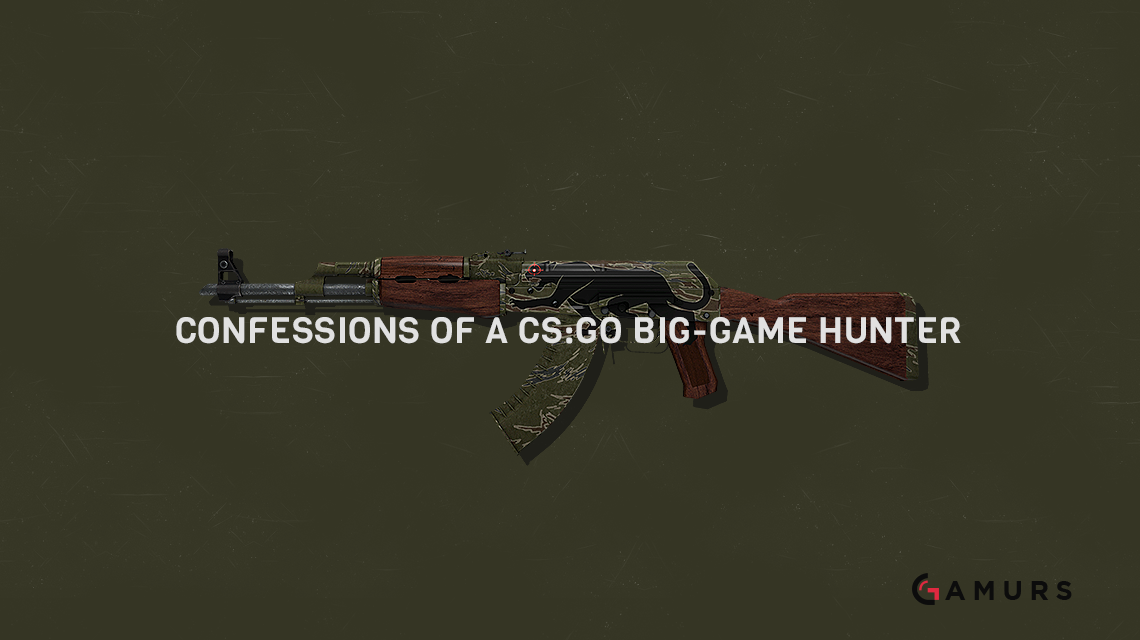 Of all the traditional FPS games that I play, Counter-Strike: Global Offensive seems to be the game that keeps me on the prowl for more. At times, I absolutely hate CS:GO. Other times, I love playing the game. Quenching a CS:GO addiction is hard, especially when your thirst for The Hunt is insatiable.

Time Is The Enemy

For people with little time to immerse themselves into a world of video games for periods of time, it’s difficult to find the appropriate moments to delve into your favorite escapade. There aren’t enough hours in a day for eating, sleeping, working, studying and gaming. But, sometimes you just have to find ways to make it work. Denzel Washington articulated this as “Do what you gotta do so that you can do what you want to do.” I’m always trying to find time in the day to play the game and maintain a skill threshold that will keep me at the top of my game (I’m a Master Guardian II now, so I’m very average).

“Do what you gotta do so that you can do what you want to do.” – Denzel Washington

To get a relatively good warm-up before a match, it requires about five to ten minutes of Free-For-All Deathmatch on community servers to sharpen my aim. If I want to play with a queue on Matchmaking/FACEIT, it can take another ten minutes if the people I want to play with are taking their sweet, old time. Once all of the prerequisites for a match are figured out, times for matches can range between thirty and sixty minutes (depending on if it’s a tight match or not).

Although I’m constantly seeking time to ease the pain of separation anxiety from CS:GO, my search isn’t for the ticks on the clock. I hunt for teammates that share the same passion for the game as me; I hunt for competitive matches that accelerate my heart rate with adrenaline; I hunt for those tense in-game moments that leave me yearning for more.

When you’re a consistent solo-queuer, finding four other teammates who have functioning microphones and functioning brains feels nearly impossible. Yes, this is the typical “I’m this rank because my teammates hold me back” argument, but sometimes it holds a lot of truth. Have you ever had a teammate force-up a rifle and screw up your economy until your team’s money is completely reset? Say hello to a few rounds quasi-buys for the team because of that guy. Don’t be that guy. Instances like these always leave me tilted because CS:GO is a team-based game; not a game of pure lone-wolfing. To combat this problem, I typically befriend players who are both skilled and smart so that I can form cohesive queues that will make games close and more fun for me.

Once you have a team that can work together as a unit, you can build off of their play-styles and build strats. Did you notice one of your teammates particularly skilled at AWPing? Buy them the AWP instead and maybe they can make a big play that can shift the game in your favor. It doesn’t hurt to be selfless every once in awhile. Have you been noticing the enemy team becoming aggressive on the Counter-Terrorist side? Tell your team to spread out and play for picks. Small play-calls such as these are what separates good teams from great teams when games are too close to predict.

Making sure your team is aware of situational plays is key to solidifying victory. Counter-Strike is a game in which incremental decisions in the match can sway momentum for any team. One big play has the power to either tilt or destroy a team, both mentally and financially. Doing so is purely up to the players of both teams.

Risk It For The Biscuit

In cases where teamwork just doesn’t cut it, you’re going to need to rely on a tactic that only works when the time is right: individual talent.

Showboating your in-game talent and intellect is something that shouldn’t be done often. Making risky plays that don’t benefit your team in a given situation could leave your team to make decisions that are detrimental for your path to the win. Don’t peek that AWPer that has been tilting your team for half the game. Don’t challenge a site alone with bomb. Don’t risk it when the biscuit isn’t worth it.

Opportunist plays such as Robin “flusha” Rönnquist’s combines the best of coordinated teamwork, individual talent and healthy risk taking. Richard Lewis describes every aspect of his play perfectly: If you want to pull off a play as spectacular as Flusha’s, you need to do so when the time is right and when you’re confident enough in yourself that you can pull it off. Confidence is key. In Duncan “Thorin” Shields article The Thorin Treatment: Moments We Watch For, he speaks of the revelry that can be found in seemingly insignificant moments during games.

“These moments are not about who you are or what you were, they’re about what you can do right now. Great players performing under pressure due to the purity of their intent. That’s why we feel an underlying disgust with those high level competitors who fail again and again in these instances. It is so often the case that said player chokes and fails because he doubts himself, questioning and second-guessing himself in the crucial moment and thus failing to listen to the inner voice which directs him to the right path, call it intuition to avoid the mystical explanation. If they cannot believe in themselves then no wonder we cannot.”

When combined correctly, teamwork and healthy decision-making brings moments during games that can beget unparalleled adrenaline and emotions that is only felt by true competitors.

Hunt Or Be Hunted

Close competitive games of camaraderie are those graceful jaguars that I hunt for. Sometimes they elude me when I have obstacles barring me from finding those games. When those jaguars become the players that I literally hunt for during the game, my evolutionary instincts kick in: Counter-Strike requires survival of the fittest. Perhaps feelings such are these are what compels people to cheat. Feelings of dominance and superiority drives us to irrationality. Keeping mind clear of bloodthirst can help hunters such as myself remain sane during The Hunt.

Do you agree that playing CS:GO is like hunting? Let us know your thoughts in the comments or with a tweet @GAMURScom