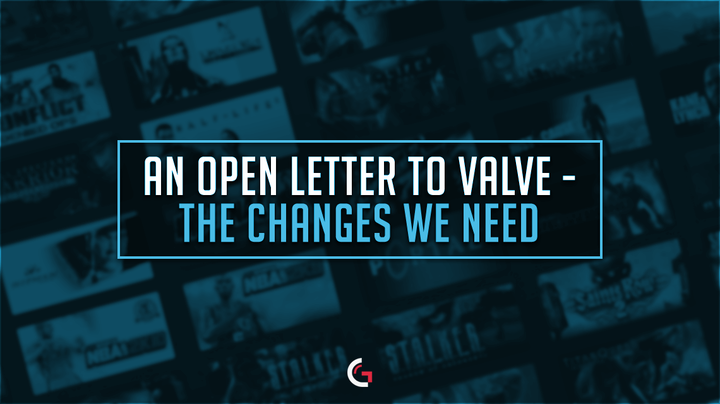 At times, the Counter-Strike community can act foolishly and childish. The wisdom contained within the community is drowned out by demands like “I want this” and “Valve please fix.” As a member of this community, I apologize. Nevertheless, you are out of touch with the game, despite controlling it. If change is not made soon, you could lose even more of the playerbase and even the most patient and most wise will turn angry as well.

Valve, your inability to make beneficial changes to Counter-Strike stems from your lack of direction and community involvement. We ask for one change, and you do the opposite. We need something done or said right now, and you wait a year to do it. To combat these issues, I suggest having a project leader, a community spokesperson, and a dedicated, sizable team for CS:GO.

The reason why Valve lacks direction is due to the structure of the organization. Valve is an anarchy. There is no oversight, there are no bosses, and people do whatever the hell they want. Thorin made the point in a video that Valve really has failed with their hippie commune approach to game development. Who takes out the trash and cleans the toilets? Someone has to, and a janitor is specifically paid for that job in which people dictate what needs to be cleaned and maintained. Whether Valve likes it or not, CS:GO needs maintenance and there is a way that the game should function. There should be no jump scouts, nor sound changes, nor reduced bomb timers; not even the R8. Valve, you need to make changes, and we need some half-decent updates.

It makes more sense to start with past faults rather than expectations for the future. Valve, we didn’t want Inferno taken out. It was a great map that every professional team played, making it one of the best maps despite its problems. The way it was done was horrible too. One cannot just pluck a map out of the pool and insert a “new and improved” one. It does not work that way in a competitive game, and much of what makes CS:GO a great game is the competition in both the biggest esports events and the lowest matchmaking games.

It really isn’t hard to get on top of this issue. All that is needed is more communication and warning, hence the reason for a community spokesperson. Such a person could also facilitate communication between the pros and the developers because the current system of speaking at Majors clearly isn’t working.

Another set of changes that aren’t wanted are the sound changes. First of all, some of them sound horrible. Absolutely no one wanted new gun sounds. If you want to work on sound effects, then go fix directional sound so that maps like Nuke can be played properly. In fact, there was some backlash to Turner’s ELEAGUE trailer where they modified gun sounds. If that wasn’t enough warning, then no amount of warning will sway Valve.

Second, many of the guns sound the same. It is much more difficult to distinguish which gun is which, and that’s not because we aren’t used to them. In a now famous video of Spencer “Hiko” Martin reacting to the new pistol sounds, he couldn’t tell the difference between a P250 and a Five-Seven. After having gone paintballing at the MLG Major, he thought it sounded more like a paintball gun than a real one.

Finally, if you are going to change the sounds, then do it right. An expert in this field had explained on reddit why the gun sounds were poorly created, especially the new Deagle sound. Maybe you could have hired an expert to work on gun sounds.

What were you thinking when you added the R8? A one shot pistol with extreme accuracy, even while moving? What is this? This goes beyond the Call of Duty memes. That change makes no sense. The pistols were already too overpowered; an even more powerful one was not needed. The entirety of the community agrees that pistols should not be so powerful. One should not be able to switch from an AWP to a CZ-75 and have the upper-hand after missing a shot with the AWP. One should be punished for their poor aim/poor positioning, not rewarded for their $500 investment of a machine pistol. Fortunately, the TEC-9 and CZ-75 have been nerfed a bit, but pistols are still too powerful.

It makes no sense to be able to kill someone with a P250 close range with a headshot, yet at the same range, an M4 cannot. We can accept the premise that an M4 is weaker than an AK because it makes for better gameplay, but it is both game breaking and reality shattering when a $300 pistol can do more in some respects than a high-powered assault rifle. You don’t see many political candidates campaigning against P250’s, but there are so many that are against guns like the M4. If the P250 is more dangerous, why aren’t they campaigning against that?

Accuracy, or the lack of it, is a huge problem in CS:GO. There are certain situations in which a player should have an advantage over other players. If they are standing still, then they should have perfect accuracy. After all, this is a competitive game, and it is imperative that there are no random elements. A still-standing player with a good position should always have an advantage over a player in motion and in a poor position. Players should be rewarded for better positioning and game-sense.

It shouldn’t be the other way around, where players in a poor position, such as in the air, are rewarded and win out in duels. Peeker’s advantage should also be eliminated, perfected, or at least eliminated for LAN. Games as old as the Counter-Strike franchise itself have better solutions to high ping, so there is no reason for it to exist. Valve, your recent changes to rifles do not help at all in the first-bullet accuracy department. This recent change is merely a band-aid to the larger problems involving accuracy that the community has complained about, such as hit-registration and moving accuracy.

Speaking of which, no one wanted the AWP to be changed a year ago. Everyone thought that it functioned properly. Some would even say that it was too much of a risk compared to reward. It’s expensive, slow, and limited in the situations that it may be used in, but in the perfect situation and in the hands of a talented AWPer, it would bring disaster to those who opposed him.

The movement change on the AWP had only served to make a risky gun riskier and has permanently hampered some of the best AWPers in CS:GO, such as KennyS and JW. On the other hand, the Scout has way too much movement speed and accuracy. Jumping with a gun and getting a headshot every time should not be possible, and for a gun of that price, it’s unthinkable. Valve, the player base had a little bit more in mind when it came to fixing the crab-walk bug.

We gamers and spectators cannot understand why Valve prefers to dance around the problem rather than fix it. To combat the problems with smokes, you decided to lengthen the bomb timer. Because it isn’t exactly representative of the matchmaking experience, you decided to ban coaches right out of the blue. Some teams were specially structured around coaches and were in the process of roster changes with a coach in-mind.

To dismiss coaches as you have done completely shakes up the scene in an unfair way. It’s bad enough that you don’t communicate these things to teams, but you also gave them every reason to think coaching was acceptable in your eyes. This is because Valve hasn’t stepped in once to stop coaching in the year and a half it has gone on. You have even provided the means for coaches to talk to players in-game at your Majors.

The teams had every right to think that coaching had the go-ahead from Valve, and it is reckless and irresponsible to simply get rid of such a critical role without warning. If Valve is the great company it claims to be, then you can start by making your visions and plans very clear from the start. Unfortunately, the Valve CS:GO team is an unorganized mess, unlike IceFrog’s Dota 2 team, which has a leader and structure.

Many in the CS community would also like to see an International come over from Dota to our game. Reducing the number of Majors is certainly not the way to quell the community’s dissatisfaction, so Valve, you better have one in the works for the end of this year or there will be hell to pay.

The reason why the community wants an International is because it is a huge event with a huge prize purse. With a tournament format like TI, we could be certain who the best team at the tournament was, and with fewer drastic changes during the year, we could call the winner the best of the year. The problem with something like TI is that all other results lose meaning. To combat that, Dota 2 has instituted CS:GO’s Major system so that a great tournament like TI could take place but doesn’t dwarf the entire year. As seen with this year’s International in Dota 2, the bar was lifted much higher in terms of production. Using holograms? That was amazing. In CS:GO, sadly, we have no such advances, and it’s not because our community does not deserve it.

Counter-Strike is a very old franchise with a welcoming tight-knit community. There are times when the community can be erratic or harmful, but we are certainly less so than Dota 2. In Dota 2, fans have been very hostile to newcomers and have often held a philistine mentality towards content creators. There have been times when that community has gone out and attacked others, and there have been times where they have even hurt the developers of Dota 2. In one such instance, Dota 2 players gave poor ratings because they didn’t have their way. In Counter-Strike’s 17 year history, there has been nothing like this, so why don’t we have better and more attentive developers?

I don’t know why those working on Counter-Strike have failed in so many areas and as often as they do, but I am fairly certain that everyone at Valve is capable of doing great things in the field of game development, even if it doesn’t seem that way right now.

Valve, not everything you have done has been bad. It’s not like you took Minh “Gooseman” Le’s creation and only ruined it. The new beta is a great step forward, and your increased responsiveness is duly noted. If you are more aware of the community and professional scene, many of the outlined problems would be fixed and new, enjoyable, things could be added to the game. Such changes have the potential to satisfy the loyal players, bring back lost fans, and maybe even grow the game beyond previous heights.