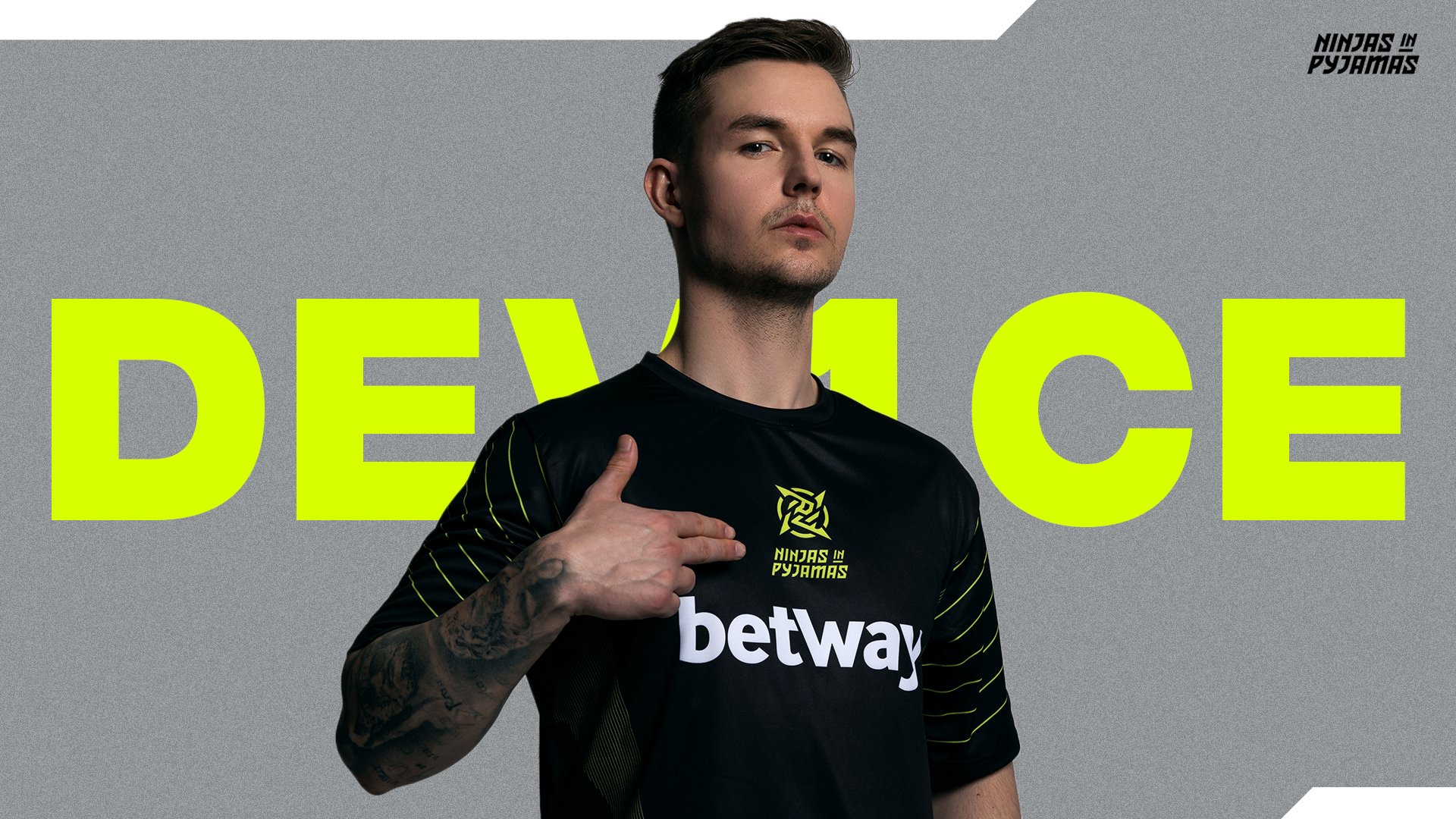 There are only a few names that have truly become the faces of their franchise throughout their CS:GO careers. Nicolai “dev1ce” Reedtz is one of them. The star AWPer slowly conquered the world under Astralis’ banner starting in 2016.

Winning four Majors in the process, dev1ce has proved himself repeatedly on the biggest stages of competitive CS:GO. While there have been players who are considered more talented than him in terms of raw mechanics, dev1ce always found a way to take down teams featuring prodigies like s1mple and ZywOo through consistency.

Though the Astralis squad was mostly out of the spotlight in 2020, it never seemed like the departure of the team’s star AWPer was on the horizon. The news of dev1ce leaving Astralis to join Ninjas in Pyjamas almost came out of nowhere since there weren’t any signs or leaks that usually drop before moves of this caliber.

Even if this is upsetting news for Astralis fans, a new challenge awaits both the franchise and dev1ce on NiP. Despite undergoing a rebuilding process in 2020, NiP was still struggling to achieve results and the org decided it needed to bring on someone with exceptional knowledge and experience.

As dev1ce sets out to create more memories and accomplish more achievements with his new team, Astralis fans can at least take a trip down memory lane to remember him and his on-point plays.

Here are seven of dev1ce’s best plays from his time on Astralis.

Having the high ground on Train can be a double-edged sword. While you’ll have a nice view of all angles, you’ll also be out in the open, meaning an enemy who’s aware of your position can easily one-tap you.

That may not be the case if you’re dev1ce, however. During the Starladder Major 2019 in Berlin, Astralis were up against NRG in the semifinals. Though dev1ce was able to get a quick pick off on the left side of Train’s upper part, the rest of NRG’s players started working their way into the site, backing dev1ce into a corner.

Despite having the numerical and positioning advantage, NRG’s squad couldn’t escape dev1ce’s precise aim and got one tapped one by one as they tried to overwhelm the Astralis star on the lower side of the site.

Not many people prefer buying smokes in low-rank CS:GO matches. It’s relatively hard to coordinate smokes with random teammates, but they’re an essential part of all high-caliber matches since they make rotations around the map a lot easier to pull off.

Rotations that look like a piece of cake can come crashing down, though, if dev1ce is casually chilling inside one of them. During a group stage match between Team Liquid and Astralis during ESL Pro League season 13 in March, dev1ce decided to stop a whole rotation by himself.

Placed inside the smoke that was thrown just outside of the catwalk on Dust II, dev1ce quickly one tapped two enemies before they could understand what was going on. Right after that, he scored a long-range kill and dropped down to collect one more head, securing the round in the process.

You’re trapped in here with me: DreamHack Open Fall 2020 playoffs – Astralis vs. Heroic

When you take a long-range fight on any map, you have a lot of ground to use as cover. But when you’re inside vents, only the player who has the element of surprise and the better aim comes out on top. And dev1ce knows how to masterfully turn a vent into a trap.

In the lower bracket finals of the DreamHack Open Fall 2020 playoffs, Astralis were up against Heroic. After losing the numbers advantage, Heroic’s remaining players quickly tried to find alternative ways to wrap around Astralis. Dev1ce, waiting inside the vents, had no intention of letting them get away. He quickly took one enemy down with a no-scope AWP shot inside the vents.

Though the gunfire gave away his whereabouts, dev1ce was also able to take down a second player who stepped into the vents. The last remaining player on the Heroic squad tried to avenge his teammates, throwing a grenade to lure out dev1ce. But he quickly got sniped from a narrow-angle as well.

Shoutcasters use the term “on fire” regularly when a player is performing well—and there couldn’t be a better phrase to describe dev1ce’s precision in Astralis’ match against Liquid during the IEM Global Challenge 2020 grand finals in December.

From a spectator’s perspective, the round was looking a bit boring since both teams were biding their time to avoid making any mistakes. That lasted until Liquid made the mistake of pushing for the A site on Dust II, where dev1ce was positioned. The star AWPer quickly landed a double kill with a single shot, causing Liquid to back off.

After the initial shock that TL went through, the squad quickly fell apart and lost the round to Astralis.

The middle part of Inferno plays a vital role in assuring map dominance in a round. Despite its strategic locations, professional teams can still afford to focus on other objectives around the map, leaving the middle open for rotations.

While most of these rotations can be anticipated by seasoned veterans, it takes a keen eye to notice an attempt at a full-on invasion. ENCE decided that it could be a decent idea to catch Astralis off guard by looping around them through the middle of the map during the IEM Katowice 2019 grand finals. But dev1ce wasn’t going to get fooled that easily.

As Astralis were getting ready to move toward the B site after dropping a couple of grenades on the middle of the map, dev1ce noticed an anomaly. ENCE started peeking one by one and dev1ce kept on picking them off with his AK-47. In a matter of seconds, dev1ce took down four members of ENCE while gla1ve came back to land the finishing blow.

Holding down the B site on Train can quickly turn into a game of hide and seek between two teams. Considering the number of entrances to the landmark and chances to find cover, you’ll need to be on point to capitalize on every opportunity.

Defending the B site from the upper part of the area, dev1ce had a bird’s eye view of the location against Fnatic in ESL Pro League season 13’s group stage. Astralis were still taking the round slowly with the numbers advantage, but Fnatic were looking to take the B site with quick maneuvers with their superior positioning.

Since a smoke grenade was covering the entrance of upper B, dev1ce took the opportunity to move forward and take down two players hiding in the spools. As the smoke cleared out, dev1ce noticed one last player and sniped him while only losing a quarter of his HP.

There are only a few weapons that reward high levels of accuracy as much as an AWP. A Deagle, though, has been the trusty companion of many AWPers.

In the upper bracket finals of BLAST Premier Global Finals 2020 in January, Astralis were playing against Team Vitality. After a shaky start to the 25th round, dev1ce quickly found himself in a one-vs-four situation on Overpass. Backed up in the alley, dev1ce was slowly moving toward the train area when he started tapping the heads of the Vitality squad.

As if landing two headshots within three shots wasn’t enough, dev1ce wrapped the round up by taking down the two remaining Vitality players with a single bullet.