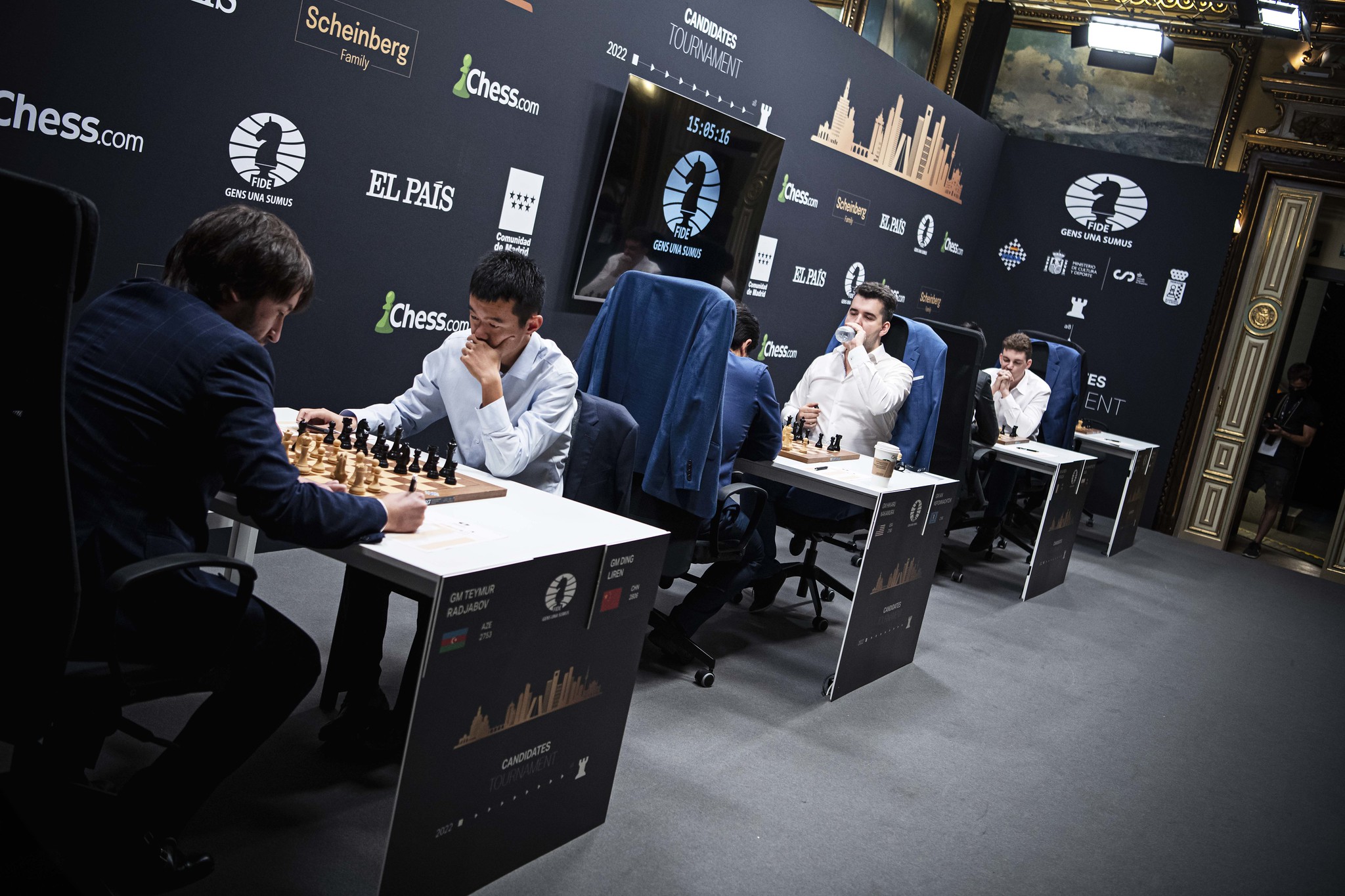 It was another round of four draws in Madrid as eight of the best players in the world all ended up splitting the points. That isn’t the whole story of Round 5 of the Candidates: the games could have gone very differently and some of the participants have shown quite the chink in their armor in these games.

Hikaru Nakamura almost set the internet on fire: 17 moves into the game, a hastily played and oddly poor move by Ian Nepomniachtchi gave the popular streamer a 1.5-pont advantage on the board. Walking into the Petroff (or Russian Game), a previously popular drawish line with Black (and Nepo’s occasional tool of choice against 1. e4 in the world championship match against Magnus Carlsen), 15. cxd5 was a small but logical novelty that invited Nepo’s queen forward.

He took the pawn and quickly overextended on the board with 16. – Qxe4. Shockingly, he then followed up with a near-instantaneous decision to move the queen over to g4 and land into hot water. The alternative, Qb1, would have led to complicated and difficult lines that would have led to equal endgames after a series of forcing lines and precise moves. It was the only viable option in the position: instead, the evaluation bar shot up after Nepo gave up a bajillion tempi after having to respond to a series of moves chasing his queen all over the board, having to eventually land on b1 anyway.

However, Nakamura couldn’t find a way to cleanly convert his advantage as his time was ticking away, and he gifted it all back with 28. Na5?, a move that aimed to get the knight to c6, a threat that Nepo would easily be able to parry. However, Naka was down to just 13 minutes on the clock at this point, with twelve more moves to make to gain a bit of extra time. Nepo made the most of this opportunity and activated his pieces with a couple of precise moves, prompting Nakamura to bail out of the complicated position and take a three-fold repetition to split the points.

Who knows what would have happened if Naka found a way to convert his advantage? Instead, he’s still a whole point behind Nepomniachtchi, who must be thanking the chess gods that they didn’t punish him for his hubris and haste.

Caruana clashes with Rapport in the Sicilian before bailing out

The master of opening preparation faced the master of oddball openings today and the ensuing position turned out to be just as explosive as chess fans around the world would have hoped. Experts felts like Rapport’s play has been a bit shaky so far at the event, especially with the Black pieces, but he held his ground against one of the tournament leaders in admirable fashion, creating chances of his own to the extent that Caruana had to bail out into a forced draw instead of navigating the complicated situation on the board.

Once again, Rapport went into the Taimanov Sicilian and got served with an interesting idea of 9. Qd2, 12. Rf1 and 13. g5 as Caruana tried to make the most of his developmental edge on the kingside.

Of all these ideas, g5 turned out to be a little too optimistic. Rapport started to quickly roll down his pawns on the other side of the board, and as both players kept pushing on opposite sides, as is traditional in the Sicilian Defense, the computer was actually showing Black with a bit of an advantage.

With both kings stuck in the middle and a nasty battery facing down White’s king, Caruana’s queen lunged for the g7 pawn, threatening the rook on g8. It quickly became clear that the only way to defuse this position was to smother the attack and repeat moves, and the players did just that on move 24. Though the combustible position didn’t end up exploding, this was an exciting and expertly-navigated game from both sides.

This was yet another missed opportunity for the young Frenchman who’s had a 4-0 record against Duda heading into this game. What looked like a great opportunity to bounce back from yesterday’s horrible defeat against Nepo turned out to be a bit of a dud. Alireza has displayed exceptionally deep opening preparation in the earlier rounds and some gallant piece sacrifices, he hasn’t got anything to show for it so far.

Once again, it was a Petroff (or Russian Game) that emerged on the board, specifically a line Duda has played multiple times in recent years with the Black pieces. He was clearly feeling at home, using just ten minutes for the first fifteen moves. By that time, Alireza used 45, finally deviating from a position Duda has previously won with the Black pieces with 16. Rad1.

Slowly but surely, a mass exchange of pieces followed as the French youngster went down to just fifteen minutes on the clock against Duda’s 75. It was a clear sign of just how little pressure he’s managed to exert on his opponent in the position, and by move 36, all pieces but the queens and three symmetrical pawns were off the board, an obvious draw. Alireza was clearly quite disappointed after the conclusion of the game, quickly leaving the board without the usual exchange of thoughts and pleasantries.

The two players on the bottom of the scoreboard took the longest to finish their game of Round 5, and once again, it seemed like Radjabov wasn’t really going to push for a win with the White pieces. Indeed, it was Ding Liren who had a small edge and ever-improving chances, and taking a whole point with the Black pieces would have been perhaps the last opportunity to get himself back into contention in this winner-take-all tournament.

Both players ended up in serious time trouble and Radjabov was on the verge of self-immolation after 36. Qe2? and 39. e5?, two moves that made massive concessions to Ding Liren. However, the Chinese player also failed to find the best continuation before reaching time control and failed to spot the winning lines after 40. -. Bxd4. Instead, he played g6 and the players ended up with a drawn rook endgame soon thereafter. A good save from Radjabov, but one that is becoming rapidly more and more inconsequential as he fails to put up wins in the tournament.

Candidates Tournament 2022 – standings and round 6 matchups

There’s no doubt Rapport would love to have a quiet game with the Black pieces, rack up another half a point, get more comfortable with this field and move on to the next game. Radjabov might be an obliging opponent in this regard. The Azerbaijani player is still a tough nut to crack and is difficult to defeat but he isn’t showing much fire when it comes to actually pushing for a win. Elite players like Anish Giri suggested that Radjabov can be reliably targeted with modern theoretical opening lines, and if Rapport can defuse his opponent’s somewhat questionable choices, anything is possible.

Two of the pre-tournament favorites clash in a meetup of players that are on very different trajectories. Alireza Firouzja still hasn’t posted a win at this event and his level of play has slipped since the rest day. It was his exquisite preparation that gave him good opportunities in the early rounds, both of which he’s failed to convert, and it’s unlikely that he will have the same edge against Caruana. Alireza seems to be lacking confidence and is getting shakier with every passing round, running into time trouble in back-to-back rounds. There is no chance that Caruana was looking at this game as a possible win heading into the event, but it’s quite possible that he does so now.

Nakamura has given a good account of himself so far at the event despite the round one defeat, and he’s on an even score five rounds in, having played three games with the Black pieces against elite opposition. Normally, a game against Ding Liren wouldn’t seem like a huge opportunity to push, but the Chinese GM is not living up to his pre-tournament billing so far. Nepo was way too obliging in the previous round and Naka still hasn’t managed to find a path through the wilderness: a second opportunity with back-to-back Whites won’t come around again for him in this tournament.

The gap is only one point between these two players but the way their events have gone so far couldn’t be any more different. Nepo, as it often happens with him, blitzed to an early lead with scintillating play before getting sloppy against Nakamura. This time, he wasn’t yet punished for his transgression. Meanwhile, Duda has been solid and somewhat unspectacular. A draw with Black is always a good result in a tournament like this – meanwhile, there’s no doubt Nepo would love to get something out of this game with the White pieces. However, his early lead means he could also be more content with a draw than he would be under normal circumstances. Luckily, he is just not the kind of player that is capable of going for boring draws.