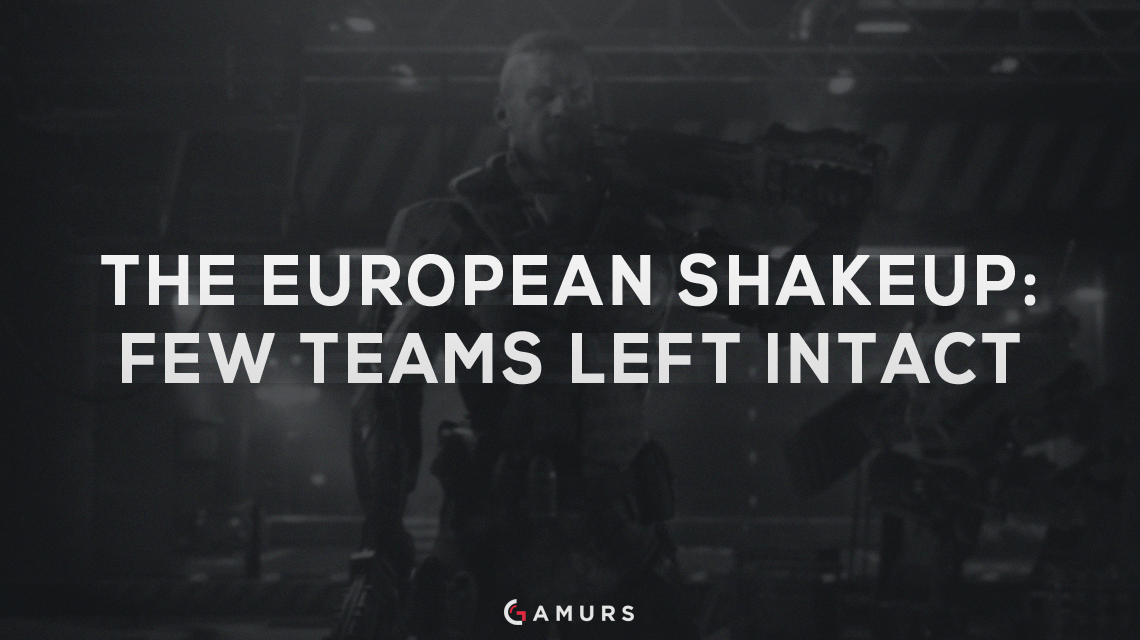 Fans expected roster changes to wait until Infinite Warfare came out, but #Rostermania started early in Europe. Behind the scenes, moves may have been discussed since the conclusion of the 2016 Call of Duty World Championship, but the first news reached the public when Epsilon Esports announced their roster is free to pursue other opportunities once their contract is up on Sept. 30.

Soon after, a flurry of substantial rumours and one highly unexpected roster change occurred, leaving barely any teams intact. To put it all in perspective, let’s see what the top European Call of Duty rosters look like now:

It is not apparent where they are headed, but Jordan “Reedy” Reed, Matthew “Skrapz” Marshall and Tom “Moose” Handley are reported to have left the organization. This leaves Gurdip “SunnyB” Bains as the only remaining player with Epsilon.

After an average year of Call of Duty, Epsilon placed top-16 at the Call of Duty World League Championship. They were not considered to be one of the top tier European teams throughout the majority of the year, so roster changes were expected.

Infused had a great run on Black Ops III. Though they may not have won every European tournament, they were nearly always in the top-four. At the Call of Duty World League Championship, Infused was upset by Team Kaliber in the group stage and then were eliminated early in bracket play, placing top-16 overall.

It was revealed that Infused would be making roster changes. According to sources, David “Urban” Marsh and Trei “Zero” Morris will be leaving the team to join Team Orbit along with Nick “Nolson” and Josh “Watson”. If this change occurs, Mark “MarkyB” Bryceland and Adam “Peatie” Peate will be looking for two.

Throughout the year, HyperGames has been known as a team that performs well online but can’t replicate their performance on LAN; they managed to win a variety of online events but only made it into the finals of one LAN. However, HyperGames did outplace several of their European rivals at the Call of Duty World League Championship, finishing top-12 overall.

This one was a shocker. Joshua-Lee “Joshh” Shephard announced he was dropped from the Splyce roster just 10 days after their amazing performance at the largest Call of Duty event of all-time. The remaining players on the roster are now Ben “Bance”, Rhys “Rated” Price, and Joseph “Joee” Pinnington. Early reports indicate Dylan “MadCat” Daly may be taking Joshh’s place.

I didn’t leave I got dropped for those wondering.

Splyce has been arguably the most consistent of the European Call of Duty teams all year long, and their composure carried into the Call of Duty World League Championship where they placed second overall. This is the first time a European team has been seen in the finals at CoD Champs. Along the way, Splyce took down a handful of the best teams in the game to prove that European Call of Duty is on the come up.

Though nothing is certain with this roster, which has seen its ups and downs this year, changes may be coming. Callum “Swanny” Swan failed to attend the Call of Duty World League Championship, a first for him, after some family issues. He has remained inactive on social media since Aug. 17 and it is uncertain when or if he will be returning to Call of Duty. As stated above, MadCat may be looking elsewhere, which would leave Jordan “Jurd” Crowley and “Tommey” Trewen in need of a teammate(s).

Millenium, despite their internal troubles, has been largely successful throughout the year. They were considered one of Europe’s premier teams and placed top-12 at the Call of Duty World League Championship, even though they used Marcus “MiRx” Carter as a last minute substitute.

More changes may be on their way. Let us know what teams you expect to see form in the comments below or on our Twitter @GAMURScom.

Josh Billy is a long time Call of Duty fan and can be contacted at [email protected] or on Twitter <a href="http://twitter.com/orbitch3mistry” target=”blank”>@OrbitCH3MISTRY.