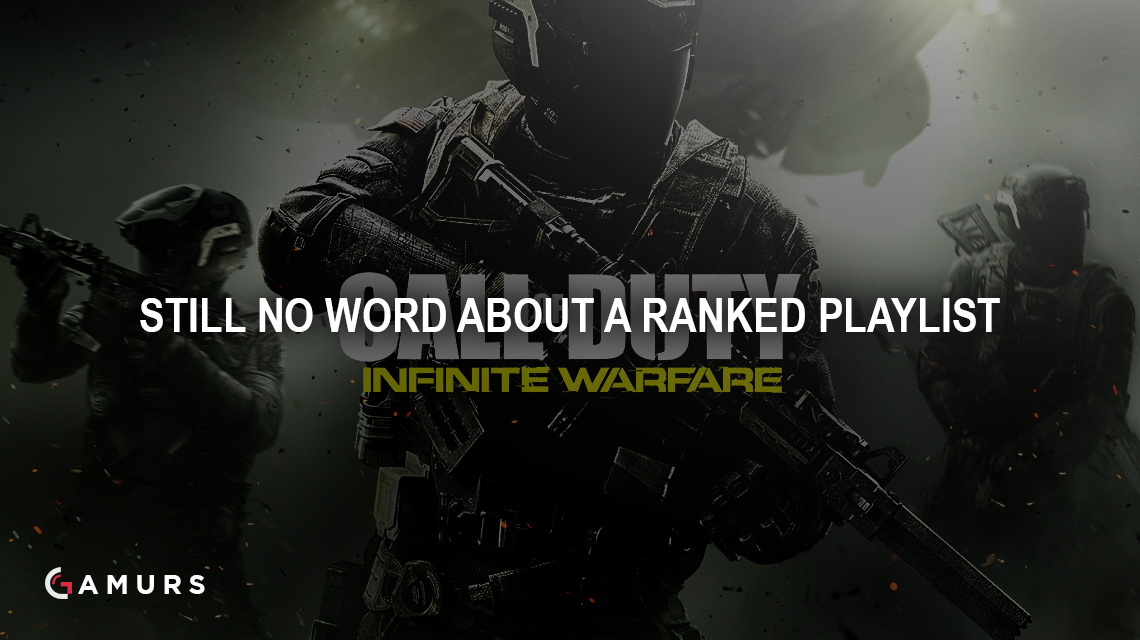 One month later, and we are still waiting for a ranked playlist within Call of Duty: Infinite Warfare. This time around, we can’t complain about broken promises because we were not promised a ranked playlist, at least not directly anyway.

At the beginning of November, CharlieIntel reported, “During Activision’s earnings call, they said ‘GameBattles and competition’ will be ‘integrated into Infinite Warfare.’ Not clear how.”

In their quarterly earnings report, however, Activision made no mention of GameBattles integration, though they did tout the success of the Call of Duty World League and made several mentions of Infinite Warfare. CharlieIntel apparently had special access to Activision and were present for their earnings call, hearing information not written in the report. After initially being reported by news outlets, GameBattles integration into the game was not mentioned by Activision, Major League Gaming (MLG), or Infinity Ward.

What we do know, however, is that GameBattles is the only place to earn Call of Duty World League points in online competitions. The service was created by Major League Gaming, who is playing a major role this year in operating the league. It is not clear if CharlieIntel’s report was misinterpreted by fans who believed GameBattles would be directly integrated into both Infinite Warfare and Modern Warfare Remastered, taking the place of a ranked playlist, but even if this is the case, players are wondering if a ranked playlist of any sort will be implemented.

It’s barely worth mentioning why a ranked playlist within Infinite Warfare is important, but I’ll do it anyway. Black Ops II spoiled us, fans of competitive Call of Duty, with League Play. I have written previously about the devolution of ranked play within the franchise, stating that League Play was the first and best ranked playlist to date. Since Black Ops II, Call of Duty developers have miraculously struggled to replicate League Play, either because of noncompetitive settings within the playlist, a funky ranking system, or simply for not even trying. As of right now, Infinity Ward is two for two in the “not even trying” category.

What competitive Call of Duty players are asking for is simple: a ranked playlist should match players of similar skill against each other in matches with competitive settings, and the ranking system should be skill-based, not based on time spent playing the game. League Play on Black Ops II provided a playlist that immersed players in competitive matches that were just like the ones the pros were playing at tournaments. It also had a ranking system that rewarded skill. But in the very next Call of Duty title, Infinity Ward decided to scrap the League Play model and implemented Clan vs. Clan, a poor substitute.

Three years later, we had higher hopes for Infinity Ward. With Activision putting so much effort into the Call of Duty World League and acquiring Major League Gaming, we expected them to push Infinity Ward in the right direction. They are doing this in terms of listening to pro players and making changes accordingly to keep the game competitive, but there has been no word about a ranked playlist, and that is concerning. Can we believe what we heard about GameBattles being integrated into both Infinite Warfare and Modern Warfare Remastered? Perhaps we misinterpreted the meaning of “GameBattles integration” and thought too far ahead.

In fact, when asked about GameBattles integration, an Activision representative stated, “There have been no announcements made about that, that I am aware of.”

Also recently, Infinity Ward Community Manager Ashton Williams stated in a live stream that she does not have any updates to provide about League Play in Infinite Warfare.

Ranked play is an integral part of many other esports titles, like League of Legends, Counter-Strike, and Overwatch. Pro players can often be found competing in the upper echelons of ranked play, inviting fans of the esport to try it out for themselves. This is what League Play did on Black Ops II and part of what made the game one of the best titles in Call of Duty esports history.

Will ranked play ever make its way into Infinite Warfare? Comment your thoughts below or on Twitter.