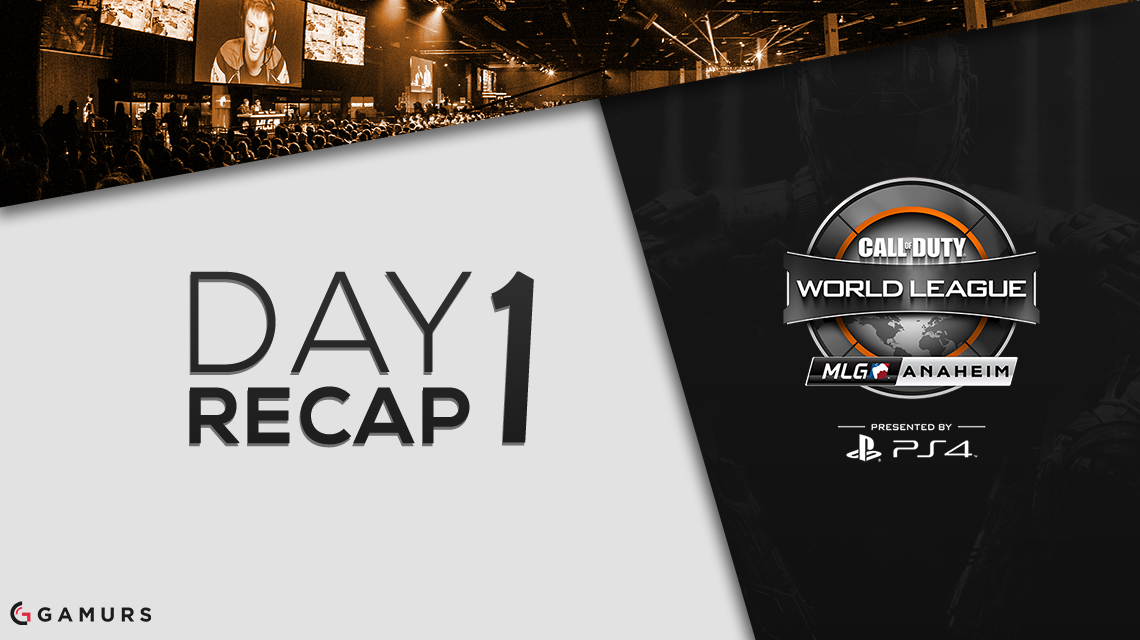 The first MLG event of the year, the coveted MLG Anaheim Open, started off with only slight delays due to controller issues. But once the games began, they were rolling.

MLG Anaheim is perhaps the most highly anticipated event on Black Ops 3 so far. A large open bracket with 96 teams, including several European Pro Division teams, attracted fans from all over to play. The streamed matches, however, featured the North American Pro Division teams who were automatically placed in group play. With four groups and three streams running at the same time, day 1 at Anaheim was action packed! The results of the series played can be found below.

The Hardpoint was a nail biter but the following games were not. Rise Nation has performed well on LAN all year and this tournament is no exception.

This hotly contested matchup was expected. Both Luminosity and eLevate have performed similarly well leading up to the event, so this match may very well determine which of the two will be advancing out of the group. However, eLevate pulled away with a dominating 5-0 CTF victory to take the series.

EnVy’s form as of late has been phenomenal. They have managed to find themselves in second place in the Call of Duty World League standings, even beating OpTic days before Anaheim to get there. Favored to advance to the winner’s bracket out of groups, they have not disappointed so far.

OpTic vs Cloud9 (Group A)

OpTic were not expecting a close one versus Cloud9, so they were surprised on the first map. The surprises continued on Search and Destroy, where Cloud9 took a 4 round lead, but OpTic mounted a comeback. Highly favored to win the group as well as the entire event, OpTic is not one to be down for long and they earned a shutout.

Hardpoint has been 100 Thieves strongest game mode when playing online in the Call of Duty World League. After taking a loss to H2k, the rest of the series was not looking good for them. The addition of Aches and Remy did little to aid their Search and Destroy game, so H2k were able to breeze through this series relatively easily once they were up 2-0 because Uplink is certainly never in 100 Thieves favor.

FaZe is the top ranked team in the group but their performance on LAN has been less than impressive so far this year. Ahead of Stage 2 many were calling for roster changes, but they have managed to stick it out (for over a year) and it’s worked out reasonably well. The first map, however, looked to be going in Luminosity’s favor until Train hill, where FaZe managed to prevent Luminosity from scoring 5 crucial points. FaZe rotated early to Middle Street and continued to hold off Luminosity, turning a 50+ point deficit into a win. The series continued to be a close one, going the distance with Luminosity earning a reverse sweep thanks to the slaying power of StuDyy. This type of competitiveness was predicted before the event began, and it is safe to say Group C is the ‘group of death’.

Team SoloMid is the weakest team in the group, at least in terms of recent form. They lost their off-stream match versus Cloud9 coming into this one, so a win against OpTic would have been the biggest upset imaginable. However, the last time these two teams met was at the Stage 1 Finals and TSM nearly took it. This time OpTic showed no weakness and dominated in the most lopsided series of the tournament so far.

This match started out as a complete toss-up. FaZe was still reeling from their loss to Luminosity, which likely gave eLevate more confidence coming in because they just beat Luminosity. But here in the group of death, anything can happen. Elevate kept the series alive by winning Capture the Flag in overtime to send it to game five where eLevate showed off their impressive Search and Destroy skills once again win a devastating win. FaZe now sits at 0-2 in group play and their poor LAN performance continues.

Dream Team came into this one with high hopes. In an off-stream match, they defeated compLexity 3-1, making this match much more important in the group standings. Their drive kept this series versus EnVy close, going to game five. Midway through game five, controllers issues caused delays. EnVy was up 3-2 at the time, so neither team had any momentum but they did lose crucial specialist abilities. After the break, EnVy played a few smart rounds to take the map and series.

In the open bracket, the top teams have made it through unscathed so far. European Pro Division teams Splyce, Infused, and Millenium are distributed throughout the bracket and all have a chance at making it to group play, but a few top North American amateur teams stand in their way, including Team Kaliber, Echo Fox, Cloud9 Eclipse, and Lethal Gaming (among others).

Tune in tomorrow to catch more #MLGAnaheim action! Tweet us your predictions @GAMURScom and check back later for more tournament updates.