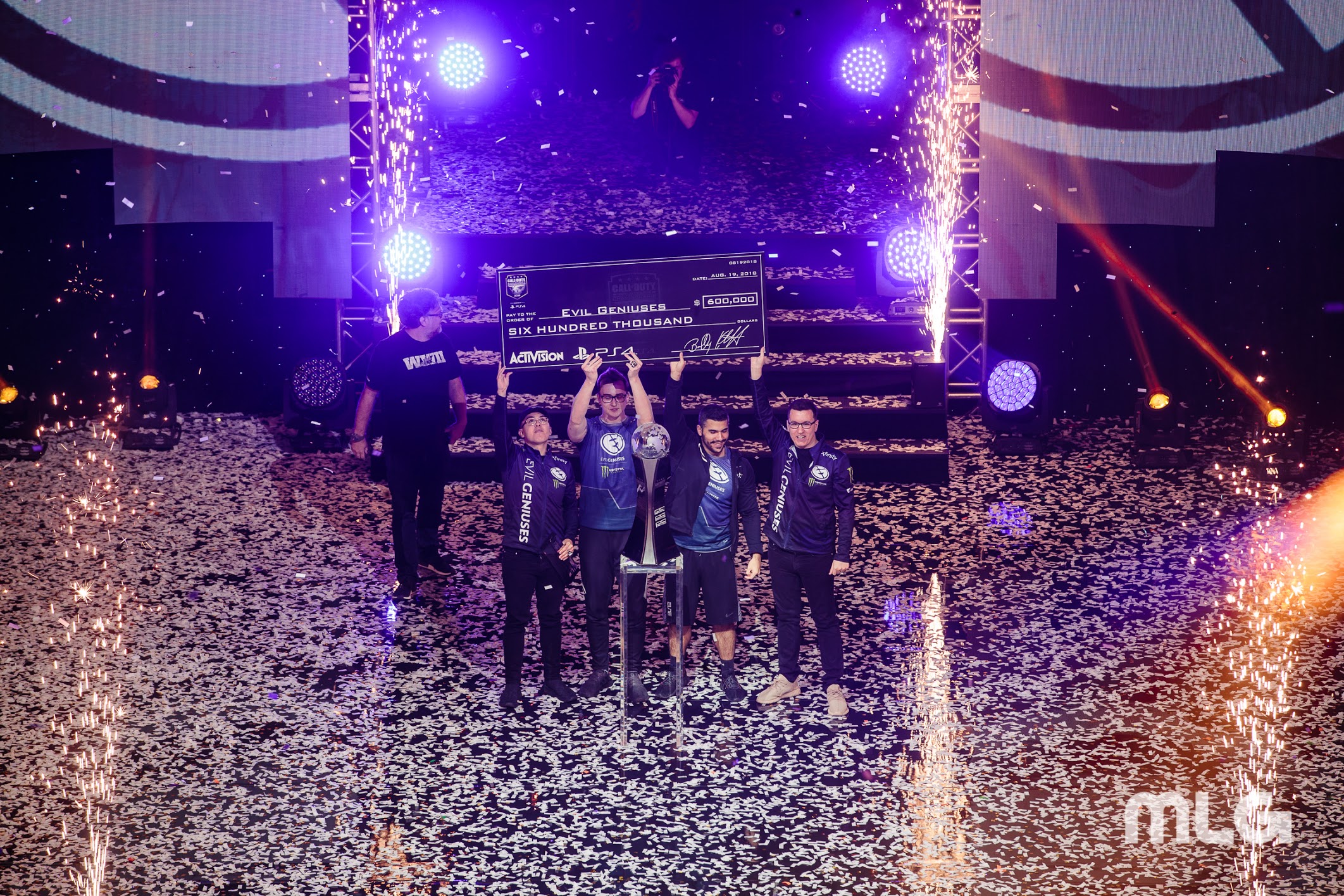 Patrick “ACHES” Price is officially a two-time Call of Duty world champion. But the veteran’s path to a second world championship was anything but easy.

Evil Geniuses—ACHES, Bryan “Apathy” Zhelyazkov, Adam “Assault” Garcia, and Justin “SiLLY” Fargo-Palmer—took home the 2018 Call of Duty World League Championship on Sunday. It was a huge surprise for many fans in the community because the team had a turbulent WWII season.

But for ACHES, this moment meant so much more than just another title to add to his legacy. Despite being one of the most successful players in Call of Duty esports history, ACHES’ last championship (prior to winning CoD Champs 2018) came at MLG Columbus in November 2014.

He came close a few times between those two victories, losing in the grand finals of CWL Las Vegas in December 2016 and CWL Seattle in April 2018. Although ACHES made those two grand finals appearances under different organizations, one constant remained: He was teaming with Assault.

After playing together from August 2016 to 2017, ACHES and Assault eventually went their separate ways heading into the WWII season. But it wasn’t a decision that ACHES necessarily wanted to make.

“Departing with Assault was something I didn’t wanna do, but it was kinda like a forced decision in a way,” ACHES told Dot Esports. “I know we work really well together.”

Halfway through the 2018 season, however, ACHES and Assault were reunited on Evil Geniuses. After coming in second at CWL Seattle, though, EG earned a top 16 placing at CWL Anaheim in June and struggled toward the end of Stage Two in the CWL Pro League.

Nobody had Evil Geniuses on their radar as a serious contender to win CoD Champs 2018. And last Thursday, EG were one map away from being eliminated in the group stage. They needed to sweep OpTic Gaming to make it out of pool play—and that’s exactly what they did, with ACHES breaking the Green Wall once again.

From that point on, EG gained serious momentum and went on a tear through the winners bracket. Evil Geniuses eventually squared off against Team Kaliber in the grand finals, and they were reverse swept in the opening series. But they never faltered and immediately turned their attention toward the second series.

“After we lost that first series, we knew we threw it,” ACHES said. “It just kinda fell out of our hands and we got kinda frantic—and we knew that. So, after that intermission between the bracket reset, we just talked and we’re like, ‘guys, we’re better than them. We went up 2-0, we can do it again.'”

ACHES, the strong leader that he is, made sure that his team simply wiped the previous series from their minds. The grand finals of CWL Seattle had to at least be a recurring thought—EG had the winners bracket advantage against Rise Nation but lost two series to finish in second place.

EG knew that they choked and threw the first best-of-five away against Team Kaliber. But ACHES wasn’t going to let a repeat of CWL Seattle happen, and it was time for EG to get their championship.

Evil Geniuses went on to sweep Team Kaliber in the second best-of-five to take home the CoD Champs 2018 title. Although this was ACHES and Apathy’s second world championship victory, it was the first title in Assault’s career—and ACHES was extremely happy for his son.

“Finally getting him that first championship, I know he’s super ecstatic about it,” ACHES said. “It’s been a long time coming for me and him. We both kinda looked at each other after we got back up to the stage and we’re like, ‘we finally did it, we got our championship that we’ve been going for.’ I knew I could count on him, and he played an insane event. He’s the MVP for sure.”

Assault was crowned the ASTRO Gaming MVP thanks to his jaw-dropping numbers—including a 1.23 overall K/D, a 1.42 Search and Destroy K/D, and a 1.47 Capture the Flag K/D.

But even though he finally won an event alongside Assault, this was more than just another championship for ACHES. Winning CoD Champs 2018 helped him fulfill a promise he made to the organization so many years ago.

“Yeah, so there’s a lot of backstory where Evil Geniuses bought us out from compLexity on my old dynasty squad when we won Champs in 2014,” ACHES said. “The goal was to continue doing what we did under that brand. We only got one title, which was Anaheim in 2014. So now being able to get that world title that I promised to the org when we were negotiating the buyout and switching teams feels great.”

By keeping his promise to Evil Geniuses, ACHES has become one of five players to win multiple CoD Champs. Some competitors will go their entire career without winning a world title, and now, ACHES has two rings.

Both world championships obviously mean a lot to the veteran, but the way in which he captured these titles was very different. So it’s not really too surprising to hear that ACHES thinks this year’s victory is much better than when he and coL dominated the competition in 2014.

“For me, this has been more than just another Call of Duty event,” ACHES said. “This is redemption—the grind back to the top. It’s been four years coming since I won a championship. It means a lot. There’s a lot of people who thought I’d never do it again, and I did it on the biggest stage, at the biggest tournament, in a boots-on-the-ground game. It feels great.”

In 2014, ACHES and coL were heavy favorites to take home the title. But that wasn’t the case this year for Evil Geniuses. After battling through a tournament full of trials and tribulations, ACHES and EG fought hard for the right to be the last team standing.

When compared to all of the championships that he’s won in his career, however, ACHES said that this one is right up there with MLG Columbus 2014—where he played through a severe hand injury to claim the title with FaZe Clan.

“You can’t beat the fact that all odds were against us,” ACHES said. “We shouldn’t have won this tournament. No one thought we would’ve. We were the underdog. And we came out and proved everybody wrong. We clutched up every single time when it mattered. It feels great, and it’s a big, big sigh of relief.”

ACHES claims that it was just a matter of time before he got back on top of the Call of Duty world. It may have taken way longer than he would’ve liked, but he attributed this success to getting a squad full of superstars as opposed to a scrap team just thrown together.

“We clutched up every single time when it mattered. It feels great, and it’s a big, big sigh of relief.”

Since this EG lineup formed in April, they’ve been in the grand finals of two out of the three events that they’ve attended. And heading into Black Ops 4, they’ll undoubtedly look to keep that trend going.

But before ACHES and Evil Geniuses fully turn the page and start to look forward to the upcoming season, Call of Duty’s villain had a special message for any of his doubters.

“To everyone else, if you doubted me, you’re not gonna do it again, and I know that,” ACHES said. “For every Champs that I ever compete at, you’re always gonna know what I’m gonna do in the bracket.”