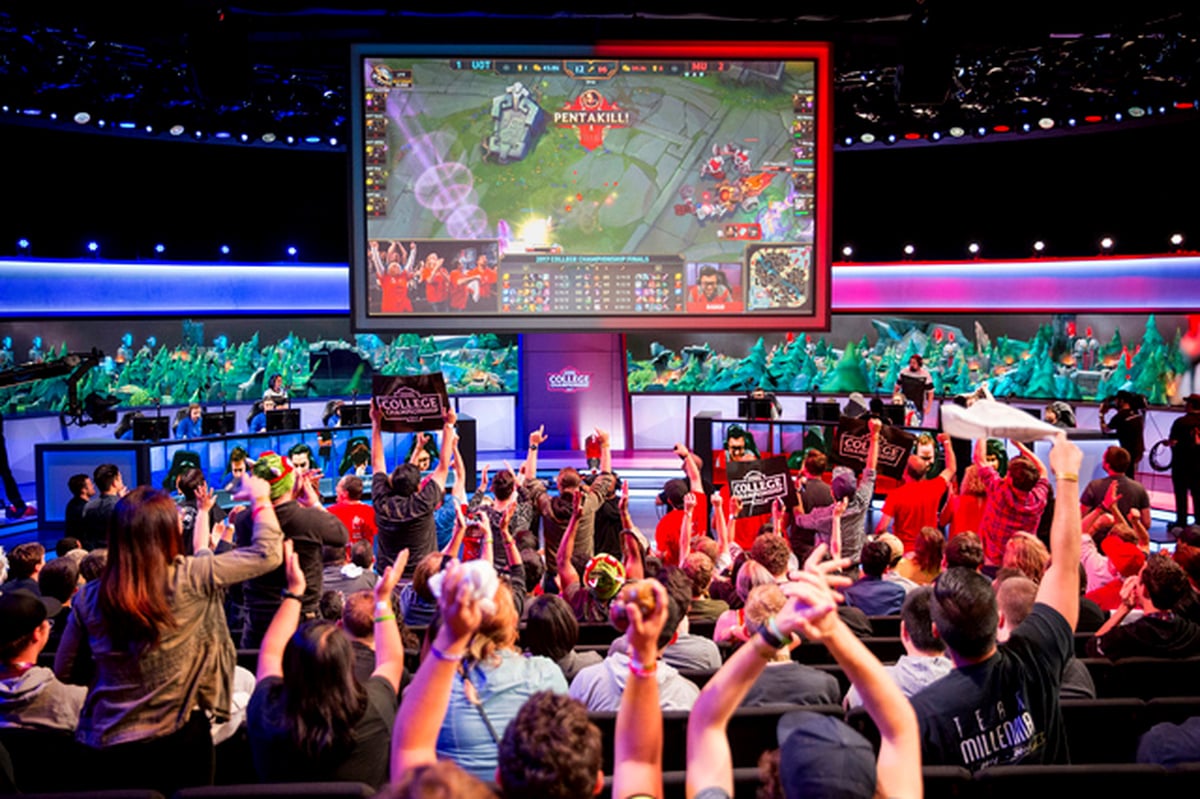 For the first time, an American institution had won the prize, and the fact that it was Maryville was a plot twist. Maryville had to overcome Robert Morris University, a regional power and the first university to enter esports, to reach the final.

Riot Games, which heavily supported the season and championship, did its best to make the final a show. Friends and family of the players flew into the LCS stadium in Los Angeles to watch. Top casters, including Aidan “Zirene” Moon, joined the production. The games were sloppy, but still exciting, and the crowd seemed entertained.

This was the culmination of a multi-year effort to build the scene, and Maryville’s victory on Sunday may lead to explosive growth in the near future. As more and more universities add scholarship esports programs, they need to be wary of trying to follow past examples and have the courage to venture out on their own.

Collegiate esports may grow to rival traditional college sports some day, but the first thing that should be done is to separate the two.

Stay away from the NCAA

The NCAA is generally perceived as a benign dictator in the world of college sports. But the organization has faced more and more criticism from media, players, and fans in recent years because at its core, the NCAA is broken.

What began as a group of men tasked with designing rules to improve safety in football has grown into a multibillion-dollar organization. The NCAA has deeply entrenched interests and a rigid business model that ruthless eliminates competition. As recent court cases and news coverage attest, the NCAA is a business that operates on the backs of unpaid student volunteers.

Players in NCAA sports are given scholarships, but the total value of athletic scholarships is a pittance compared with money from other sources. In 2013, CNBC reported that athletic scholarships amounted to over $3 billion, while the College Board showed that total aid from universities was over $44 billion. For most students looking for financial help through school, the answer is to spend more time in the classroom, not on the field.

Those that do make it onto a college roster are faced with myriad inane restrictions imposed by the NCAA. From enforced amateurism to training restrictions, these are in place ostensibly to protect the students but often serve to reinforce the moneymaking structure. It’s amazing that in 39 states, the most highly paid civil servants are the college sports coaches. All this, while the players take nothing home but a stipend.

All this flies in the face of esports culture, where teens are getting paid big money to win and some have little incentive to go to college. Throwing esports players under the NCAA could be the fastest way to kill the ecosystem.

But unlike many traditional sports, esports doesn’t need the NCAA. As this last week has shown, esports already has advanced production and broadcast resources with the ability to reach a wide variety of fans. In an age where game publishers are signing direct deals with distribution platforms, there’s no need for the NCAA as a middleman.

Temptation to join the NCAA though, will be high. At some point, the NCAA will want to bring esports under its umbrella. It offers money—something to pay the scholarships with. In this moment, teams and organizers need to stand strong and realize that the day the NCAA comes knocking, they’ve already made it on their own.

Over the past several years, esports has grown a special culture and ecosystem that should be lauded and preserved. There are a lot of things organizers, teams, and players can learn from traditional sports, but in a lot of ways, starting fresh is ideal. The next question then is what role collegiate play should play within that ecosystem.

For most players that want to play professionally, college is not a good route. The current level of play just isn’t good enough. Maryville’s victory over Toronto was secured largely because of huge talent discrepancies that Toronto couldn’t overcome. Only catastrophic mistakes from the American side in the first game let Toronto steal a victory.

That doesn’t mean it can’t be done. And in a world without the NCAA’s rules, teams and universities should be able to work together so that a player can pursue both a college diploma and a spot as professional esports athlete at the same time. Colleges would be wise to promise athletes that want to turn pro before their degrees are finished, their scholarships will be held in reserve in case they return.

At the same time, there are students who might not see esports as a viable career, but still can play while in school. It may not be possible to assemble a league full of the highest level players, but that’s beside the point.

In many college sports, there are huge discrepancies in talent across teams. Just last season in college football, powerhouse Alabama won two games by 48 points, another by 46, and had only 3 games (out of 15) that were close (where the final score was within two possessions). None of that turned people off of Alabama.

Fans still turned into those games because college sports represents something different than professional play. There’s pageantry, history, and a sense of belonging that professional teams just don’t produce. Many college sports fans refrain from watching the professional versions of those sports because pro sports lack the same sense of collective identity.

For esports publishers and organizers, that represents an opportunity to tap into a different segment of the fan population. Just like some players would rather play collegiate esports than go pro, there are fans that would rather watch them than the LCS. And by developing relationship with college fans, who hold deep-rooted interests in the schools they attended, esports titles can gain an element of permanence and legitimacy.

Robert Morris provided a blueprint when they partnered with iBUYPOWER to create a dedicated, sponsored esports arena. The future isn’t bringing college teams into the LCS studios in LA, but rather playing on the campuses, where students and fans can get involved. Collegiate esports can engage fans in a way professional teams just can’t, and organizers should take advantage of that opportunity. This is especially important as most professional esports circuits have yet to build a fully regional model.

Scholarships should be provided to attract athletes into the scene, but as money starts rolling in, it should be shared with schools and players. Collegiate esports should look like semi-professional regional leagues that cater to the unique desires of the college sports fanbase. It will take time to build an Alabama of esports, but it can happen.

Collegiate esports has a special opportunity to be different from both college sports and professional esports. Embracing those differences and being patient, even through some blowout victories, are the keys to ensuring that it thrives.