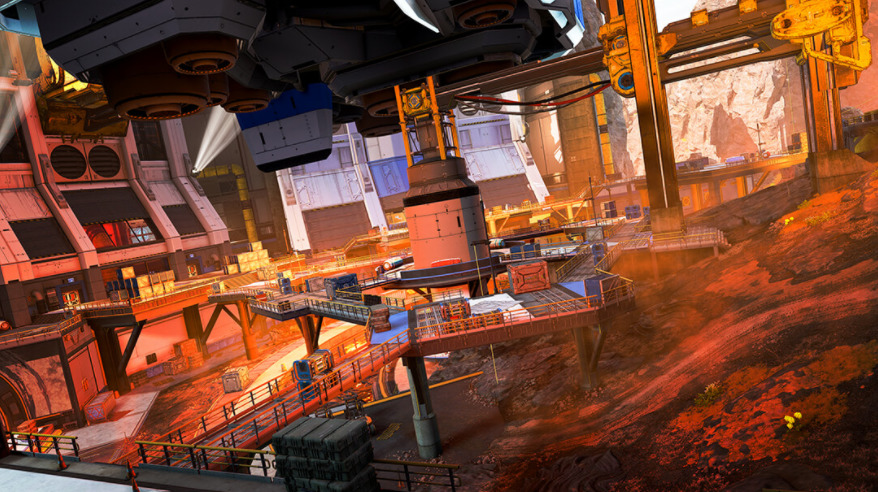 World’s Edge is going to look a bit different next season.

Respawn design director Jason McCord outlined all the changes hitting World’s Edge for Apex Legends season six: Boosted in today’s blog post. The devs decided to reinvigorate the map with new features, while simultaneously fixing any issues that may have negatively affected gameplay.

“Partly, a map update is developed to inject some ‘newness’ into the game for the launch of a season – new layouts to learn, new rotations to utilize, and new strategies to master,” McCord said. “It also gives the designers an opportunity to improve the overall flow and experience of playing the map, while addressing any pain points we’ve heard from the community.”

A new location called Launch Site, found to the west of The Dome, will feature a huge rocketship at the center, courtesy of Hammond Industries. It towers over the mountains and can be seen from across the map.

Players will definitely want to visit Launch Site since it’ll house top-tier loot and a lot of action. It’ll include four control rooms, raised catwalks, and lava-filled terrain. And a new passageway that goes through the cliffside should open up rotation opportunities on this side of the map.

Drill Site will also look different next season, being replaced by Countdown. The new point of interest will be a huge fortress with a tall perimeter. And the inclusion of a new map feature called rising blast walls will be activatable, allowing you to create a tall defense platform and permanently fortify the position.

Staging, a smaller new landing spot, will be at the center of the map east of Harvester. It should offer more loot and more gunfights. And the train that circulated through World’s Edge is being dismantled and scattered around the map.

“This single change helped us achieve one of our goals of providing more rotational options through some particularly scary chokepoints,” according to McCord. “Nearly all tunnels that used to be clear for the train (and therefore, almost never used), now have static train cars and other cover, as well as some small amounts of loot.”

But the saddest part of all the changes is the departure of the Mirage Voyage, which “Mr. Witt has flown” away “for now.”