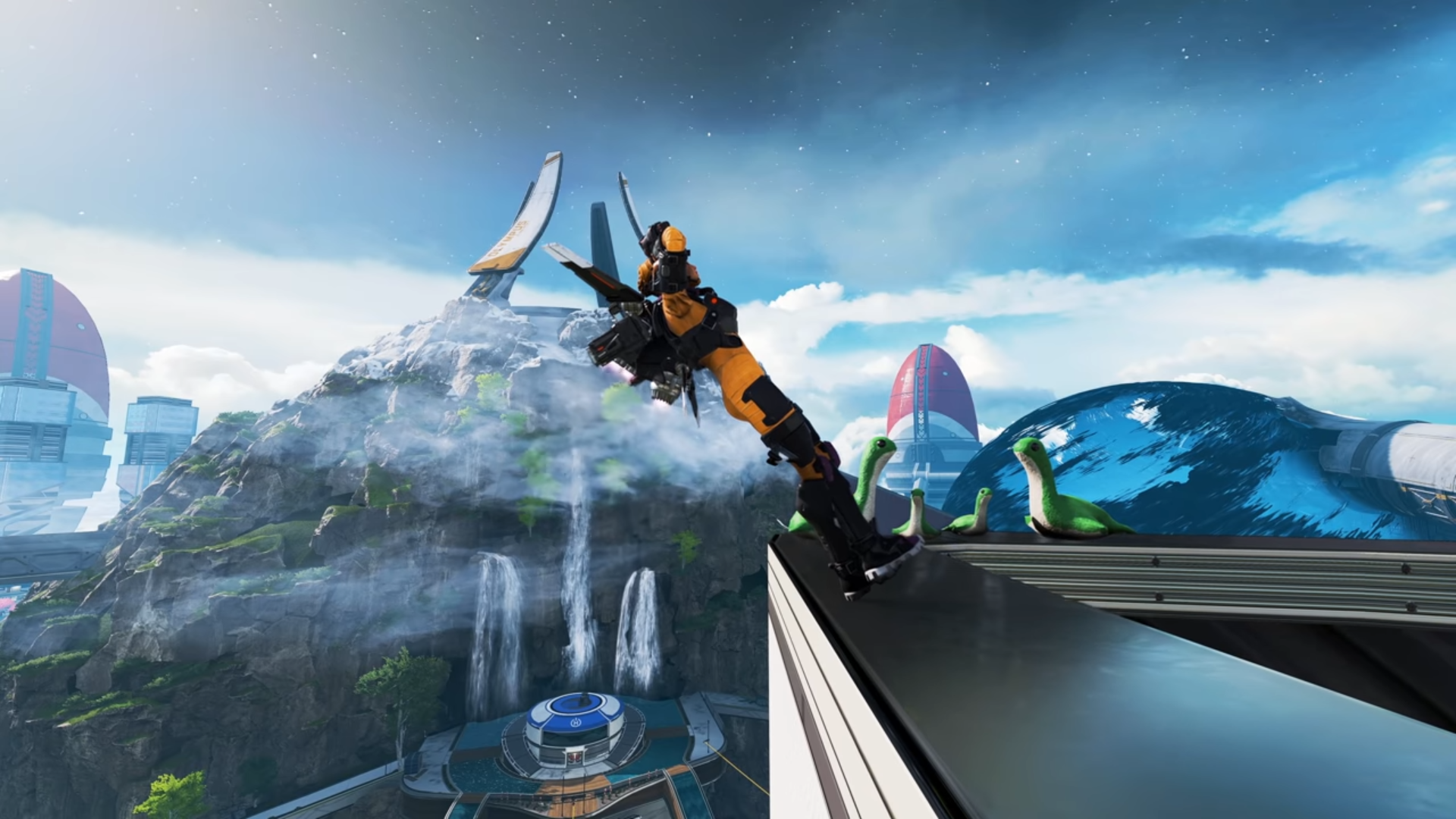 When Kairi “Valkyrie” Imahara joined Apex Legends in Season 9, she made sure everyone knew the skies belonged to her. Armed with missiles and a high-powered jetpack that lets her take her squad to new heights, Valkyrie is a formidable competitor and a great addition to any squad.

Mobility is a deadly weapon in the Apex Games, and Valkyrie has a lot of it. She can hover in the air and easily reach most high grounds in the game, enabling her to keep up with many of the game’s most mobile legends. Movement is the essence of her character and the cornerstone of her kit, but it’s far from being her only weapon.

Related: Valkyrie offers a change of pace to Apex Legends, jetpacking her way into Legacy with a chip on her shoulder

Here’s what you need to know to play Valkyrie.

Valkyrie’s passive, VTOL Jets, allows her to fly into the air and is extremely handy for reaching ledges and vantage points or repositioning. It’s a versatile ability that lets Valkyrie quickly reach more advantageous positions and can function as a short-range dash.

Activating the VTOL Jets gives Valkyrie a small forward speed boost when she engages her jetpacks. She’ll continue to fly at that velocity until you cancel her animation or she runs out of fuel, which takes about seven seconds. Her tank fills up gradually after a cooldown, which is reset if Valkyrie flies again on a partial tank.

Valkyrie’s flight pattern is fairly predictable and she’s not very fast while flying, so enemies can still shoot her in the air. Holding down the aim down sights button will take away the vertical velocity and make Valkyrie hover in a straight line, which helps control her direction if you’re trying to avoid enemy fire.

While Valkyrie is in the air, she can’t use any weapons or consumables other than her tactical, and there’s a 1-second animation after deactivating the jets that prevents her from drawing her weapons for a small window of time.

It’s possible but difficult to make a long retreat with the VTOL Jets. There’s generally no cover in the air, so Valkyrie is extremely vulnerable while flying. Unless you’re trying to make a quick dash to cover or to high ground, it’s usually best to not spend an extended amount of time in the air in front of enemies because you’re an easy target.

Her passive can be used nearly in any situation as long as there’s fuel, but the quick speed boost when activating it also cancels any previous momentum. A great way to use it is when jumping off a ledge or building to low ground: activating the jets just before touching the ground will negate the short movement delay that most legends experience when hitting the ground. Just make sure not to do it if there are enemies nearby; Valkyrie still has to go through the one-second cancel animation before pulling out her weapon.

Don’t expect Valkyrie to play like Pharah from Overwatch. A good Pharah can stay in the air almost indefinitely, but Valkyrie doesn’t have that luxury. Even though she can’t shoot while in the air, Valkyrie can still use Missile Swarm, her tactical.

Valkyrie’s tactical is a battery of missiles that unleashes an explosive salvo on enemies. Missile Swarm serves as valuable area denial and stun tool to lock enemies down before finishing them off with her weapons.

Activating her tactical throws a barrage of 12 missiles in a four-by-three square, which hit the area after a small delay (roughly two seconds). Enemies caught in the blast are stunned and take 25 damage from the first missile that hits them. If they’re struck by multiple missiles, each missile after the first deals 3 damage. Players can hold their tactical button to display a grid of where the missiles will land and carefully plan their shot or press it quickly to launch the barrage in a hurry.

The rockets can serve as a zoning tool when pushing or used to slow down enemies in a chase. They’ll lock onto the target area after being fired, so a good Valkyrie can fly into the air, shoot the missiles, then fly away while the rockets do their job. Note that Missile Swarm requires a certain amount of vertical clearance to fire, so it can’t be used in buildings or other areas with low ceilings. It’s best used outside on wide-open maps like Olympus.

Valkyrie can use Missile Swarm while on the ground, too. The ability can hit enemies hidden behind low cover, like rocks and Rampart walls. Activating the ability while in the air will grant a better line of sight, but it comes with its share of risk. Valkyrie is an easy target while firing the missiles, and it’s not hard to predict where she’s going to fly while in the air.

Valkyrie’s tactical is a significant part of her kit and adds some offense to her arsenal. Her ultimate doesn’t follow the same vein and doesn’t deal any direct damage to enemies, but it’s a useful tool for repositioning.

Skyward Dive is essentially a portable redeploy balloon for Valkyrie and her squad. The ultimate locks Valkyrie into a takeoff animation and allows fellow legends to join the launch. Activating the ability again sends the team high into the air and launches them into a skydive. The ability basically turns Valkyrie into a human jump tower. While players used to be able to spin rapidly while ascending into the air with Skyward Dive in order to avoid enemy fire, Respawn has since removed this tactic, making it easier to hit an ascending Valkyrie.

Though it’s tricky to pull this off during combat without good cover as Valkyrie and her teammates can’t shoot while flying upward or diving, Skyward Dive can be a good escape tool in the right circumstances. Outside of combat, it works as a great rotation tool, especially because of Valkyrie’s ability to see nearby enemies while skydiving. After using Skyward Dive, taking a redeploy balloon, or even jumping from the dropship, Valkyrie will highlight nearby enemies inside her field of view and within a certain distance. Teammates can also see highlighted enemies. This tool comes in handy to know if there are any enemy squads when rotating through the air.

Valkyrie is a member of the Recon class, meaning she can scan survey beacons to find upcoming ring locations. The category works well with her kit: her VTOL Jets let her easily reach most survey beacons, and she can then use that information to reposition and rotate by using Skyward Dive.

How to play Valkyrie: Tips and tricks

Valkyrie is a versatile and mobile legend. Fans can play her more aggressively by using her VTOL Jets to hop in and out of cover and get the jump on enemies. Missile Swarm is best used to clear an area or draw enemies out of hiding and stun them, allowing Valkyrie’s squad to land the first shots. Valkyrie can also use her jets to pursue a running foe, especially if they try to climb or grapple their way to safety.

A more defensive approach lets the winged avenger use her missiles to hold off an enemy squad and allow her team to escape a bad situation. Her jets can be used to outmaneuver many of the game’s less mobile legends. Skyward Dive can also quickly get her team out of trouble whenever a third party or the ring rears its head, provided she has enough cover.

Regardless of your preferred playstyle, Valkyrie has plenty of tricks up her sleeve. Learning how to use her VTOL Jets to get the best possible movement buffs is one way to improve your play, as is learning to aim Missile Swarm to best complement an assault. With the introduction of Storm Point and all of its vertical cliffs, she’s become one of the game’s most useful legends, and it’s not hard to see why.