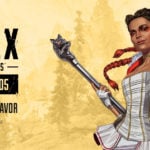 Apex Legends‘ next competitor isn’t quite like anything the battle royale has seen before. Season five introduced Loba, the orphaned daughter of two of Revenant’s victims and the best thief in the Outlands. Don’t get in her way.

Loba’s kit is aimed at looting and mobility—everything an accomplished thief could ever ask for. She can use her Jump Drive bracelet to teleport around the arena, while her passive and ultimate make looting areas as easy as stealing candy from a baby.

The character also has a rich backstory written in blood and revenge. The orphaned daughter of two accomplished thieves, Loba will do everything in her power to bring her parents’ killer, Revenant, to justice.

Loba promises to shake up Apex. Here’s everything you need to know about her.

Some join the Apex Games for glory, for the thrill, or to discover more about their past. Loba’s motivation is different: she’s out for revenge. Loba Andrade joined the Apex Games as a means to destroy the machine that killed her parents and left her to fend for herself. Her connection to the Apex Games, however, was already teased in the previous season. The Assimilation Launch Trailer has Revenant as its protagonist, but it also planted the seed that would eventually become Loba.

In the short, Revenant kills her parents, the conmen Marcos and Alanza Andrade. Their daughter escapes alive and is shown poring over her father’s corpse with blood spots around her eyes. Fans long speculated that she would be the next legend and Respawn confirmed her identity as Loba, the season five character.

After becoming an orphan, she used her illicit skills to make a living by picking pockets and stealing what she could. In one of her burglaries, she found a Jump Drive bracelet, which allowed her to teleport from one place to another—and sent her straight to the high life with her ill-gotten gains.

She joined the high-society and developed both an expensive taste and a reputation as one of the best thieves in the Outlands. She tried to put her past behind her and almost succeeded until her sidekick Jamie found more information about Revenant, bringing out all the pent up rage and fury inside her.

She infiltrated a secret Hammond Robotics facility with the help of her bracelet and found hundreds of Revenant bodies. The only way to stop the simulacrum would be to destroy his human head, the source of the simulacrum’s consciousness. Loba’s anger got the best of her and she triggered the facility’s security system after shooting at the glass protecting the head.

She exploded the facility—located beneath Skull Town in King’s Canyon. The character stumbled upon the Apex Games only to find that’s where Revenant was all along. If Loba wants to bring him down, she’ll have to participate in the Outlands’ favorite bloodsport.

Respawn officially revealed Loba’s skillset the day before the release of season five. Like most legends, she has a passive ability, a tactical, and an ultimate. Her kit is focused on gearing up herself and her squad, but her bracelet also allows her to teleport and cover distances with a teleport.

Her tactical ability, Burglar’s Best Friend, grants her plenty of mobility. She can throw her Jump Drive bracelet and teleport to high grounds, sneak away, or perform a hit-and-run on an unsuspecting team.

Her passive, Eye for Quality, allows her to see epic and legendary loot through walls. It’s a useful tool for knowing where to scavenge and could play a role in hot drops, allowing her to gain an edge over unsuspecting players. More importantly, it also synergizes well with her ultimate.

The final skill is called Black Market Boutique and sees Loba use her signature cane to gather loot in an area. Loba sets down a device that teleports all nearby loot to the inventory and all players can take up to two items from the container. The skill shares a range with Eye for Quality, which allows Loba to know the best spot to set it down.

Players must be careful when using Black Market Boutique, however. All legends can access the container, whether they’re friends or enemies—and looting the spoils can also put them in a vulnerable position.

Her kit shows that Loba is focused on looting and finding gear and it’s likely that she’ll shine in the early rounds when grabbing loot is paramount. It would allow her team to gear up and possibly engage with a less-equipped squad. Her teleport is also a welcome mobility skill that gives players the freedom to ambush enemies, use hit-and-run tactics, or flank squads with a bracelet’s throw.