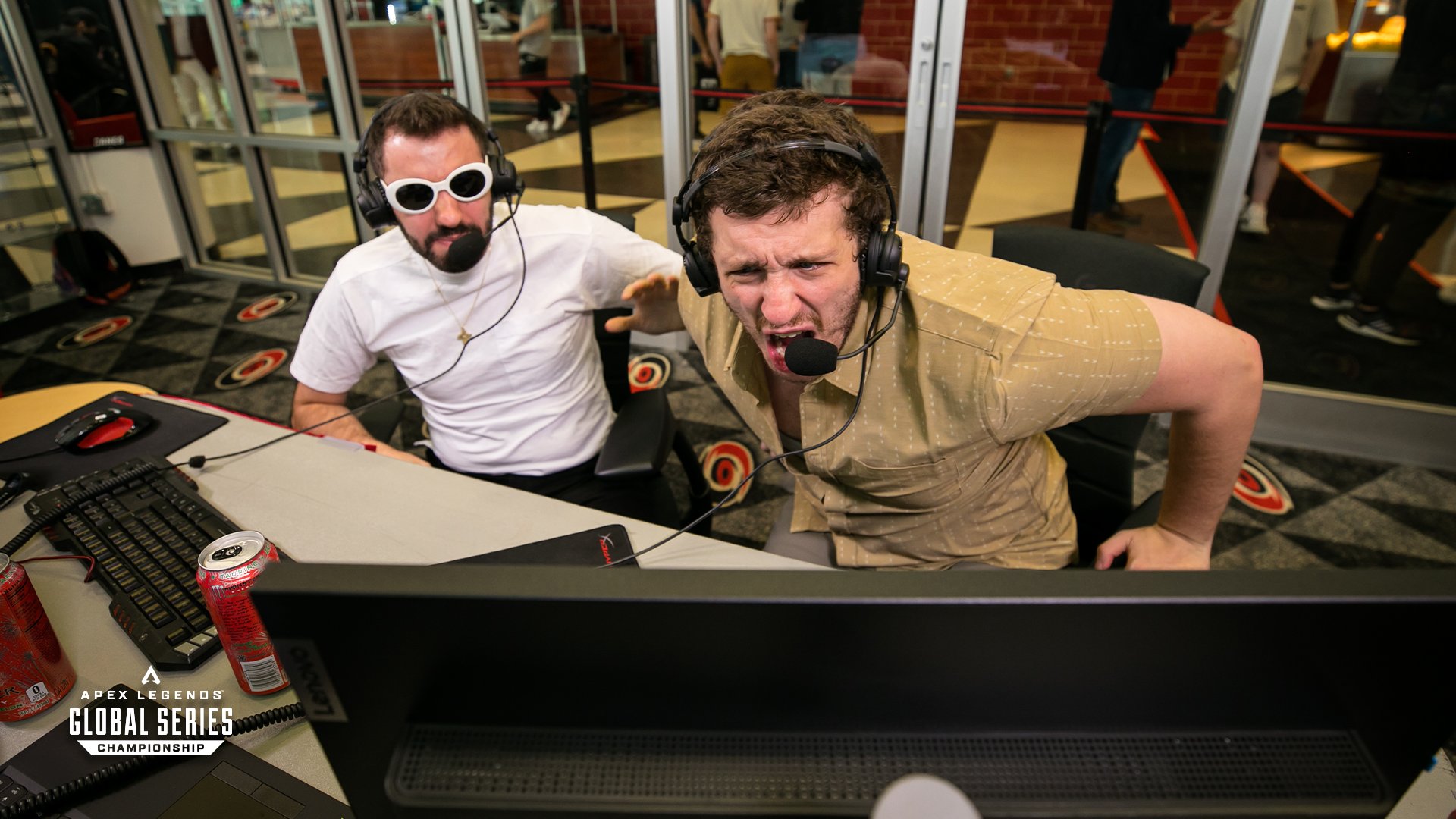 A large and enthusiastic crowd gathered on the night of Saturday, July 9 at the PNC Arena in Raleigh, North Carolina to watch Apex Legends. But this show wasn’t on the main stage. Instead, it took place inside a small glass vestibule in the lobby. The area around the enclosure, probably a repurposed merchandise shop for the Carolina Hurricanes NHL team, had been packed with people since the ALGS Championships began on Thursday, July 7, disrupting the flow of traffic and causing many passersby to stop and see what the fuss was about.

Fans were there to watch Jack “NiceWigg” Martin and Athanasios “Greek” Alestas, the popular “B-stream” casters recruited by the ALGS for the Stockholm LAN and the Raleigh championship, work. Inside their little booth, snacks littered a side table and a box of popcorn had spilled across the floor, giving it the vibe of a crowded movie theater instead of the broadcasting studio it had become.

After getting past the throng, Dot Esports briefly caught up with NiceWigg and Greek to chat about setting viewership records, the debut of a live audience in the ALGS, and their hopes for Apex esports in the future. Fans crowded the glass throughout, waiting for their opportunity to meet the streamers some of them have spent years watching.

In person, NiceWigg radiates the same vibrant energy that brings so many fans to his Twitch channel. He sits close and gives the impression that he says exactly what he thinks. Greek is more reflective, leaning back a little and considering each question carefully.

The following interview has been edited for clarity and brevity.

What does it mean to have a live audience for the first time?

NiceWigg: Actually the first time I had a live audience, I guess, was X Games, back three years ago. There were like four people in the stands, but it was pretty cool. I was expecting a big audience, didn’t see it. And then COVID hit and it was devastating because every event I competed in we were hoping someone would be there. We were hoping. And I was just waiting for this moment for so long. Meeting the fans, supporters, handshakes, hugs, hearing stories about how you’ve changed their life—it’s exactly what you want.

Have you been surprised by the fan reaction?

Greek: Being online for so long and then finally getting to meet the people who support your streams, who you play against, your peers, and all that. Finally being able to meet everybody is surreal.

Do you think this works so well because your stream feels a little bit smaller, a little bit jankier than the main broadcast? Could you see you two taking this to the main stage?

You broke your viewership record on Friday, with 71,000 viewers tuning in. Do you think you’ll surpass that for finals?

NiceWigg: I’m not trying to break any records, we’re out here having fun. It’s really cool that we got to raid someone with 35,000 people and change his life hopefully. So numbers aren’t really in mind. But if we ever break it again, I will totally be OK with that.

Did you change up anything with your casting after Stockholm? How has your work evolved?

Greek: This might come as a surprise to some people, but the banter between me and Wigg is very, very natural, and happens off camera or on camera. So we don’t practice for anything. We don’t really even want to, because we’d like to just go out there and just give that natural energy, that natural feel and everything just flows right from the chest.

NiceWigg: Having plans is not our forte. Enjoying ourselves and thinking on the fly is definitely where the authenticity comes from.

What is your biggest wish for Apex in the next year? What are you hoping for in the game?

What do you think is the biggest thing that the ALGS needs to improve upon?

Greek: I think there needs to be something looked into the COVID policy. You know, there are a lot of players that traveled a long way to get here. And you can’t help but feel bad that some of them weren’t able to actually play. When you start out as a professional player, your dream is to play on a big stage like this, and to have it taken away from them is something that they sometimes can’t handle.

NiceWigg: I would agree. You know, I’m not trying to bash anyone here, point fingers. And we do get hired by EA and I have nothing but respect for Respawn and EA, but I’ve always voiced my concerns.

Greek: It comes from a place of wanting the best for the game.

NiceWigg: EA should be a loved organization more, Respawn should be loved more, so I’m hoping they just do it for themselves as well.