Streaming has continued to grow across all major platforms to start 2021. Both Twitch and Facebook Gaming once again surpassed their previous peaks for hours watched last month. 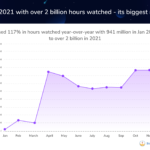 Twitch’s growth was due to the continued growth of new categories and sustained success for its biggest streamers.

“When the pandemic drove everyone indoors and online, we saw the massive boost in viewership across all of the live streaming platforms, but expected it to taper off once stay-at-home restrictions loosened up,” said Doron Nir, CEO of livestreaming tools and services provider StreamElements. “Instead, the appeal of the medium has solidified itself and viewership continues to climb with both Twitch and Facebook Gaming among the platforms with record highs in January 2021.”

The music category on Twitch saw some of the biggest growth to start the year, jumping to 24 million hours watched—up 428 percent compared to 4.6 million in January 2020. Likewise, content creators continued to dictate some of the top titles on the platform with OfflineTV and streamers associated with the group making Rust the biggest game of the year so far.

The 2013 indie title exploded in popularity due to the popular streaming group starting up a Rust server and creating a ton of content in the game. Because of this push, Rust became the second most-watched category on Twitch in January, pulling in 189 million hours watched—a jump of 1,226 percent.

As for individual streamer numbers, Rainmaker.gg said xQc is still the biggest overall creator at around 25 million hours watched in January. But international creators now make up more than half of the top 10 channels. This includes streamers like David “TheGrefg” Martinez, who broke Twitch’s record for concurrent viewership by pulling in over 2.4 million viewers for the premiere of his Fortnite Icon Series skin on Jan. 11.