Tfue’s dad shows off the winning genes in Uno 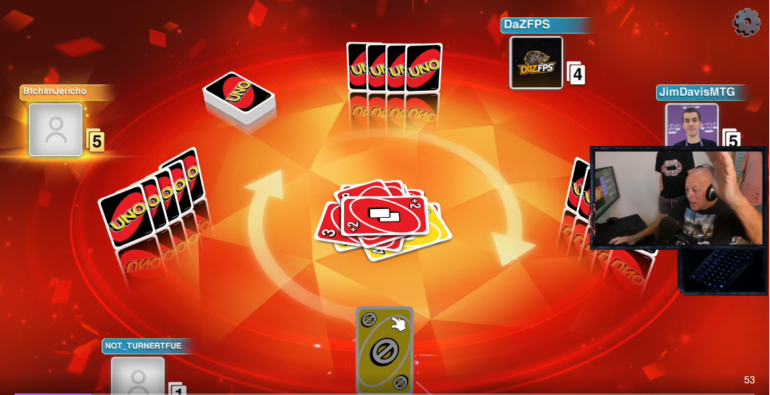 It’s no secret that gamers live for hype moments. Pulling off a 360 no scope in an FPS or a base race in League of Legends or Dota 2 can make any gamer jump to their feet with fists clenched in celebration. And that’s exactly what happened when Tfue’s dad played in the Twitch Rivals: Uno Showdown yesterday while his sons watched on.

Playing in the consolation table against ex-PlayerUnknown’s Battlegrounds pro Darren “DaZFPS” Rourke, Magic: The Gathering pro Jim Davis, and streamer Tucker “Jericho” Boner, Tfue’s dad was pumped up after seeing that a red reverse card was played. This let him play his red draw two card, leaving him with one card left, a yellow skip.

To finish off the game and claim victory, Tfue’s dad simply needed the pile to switch to yellow before his turn or have a red skip played. The cards played out in his favor as DaZFPS laid down the red skip, moving past Jim Davis and to Tfue’s dad. Tfue and his brother broke out in cheers as their dad played the final card and the celebration began.

While this isn’t a professional game, Tfue and Dadfue ended up winning $1,200 from the event. It also shows just how much fun anyone can have playing video games.

Games like Uno require a lot of luck to win. This doesn’t mean that Tfue’s dad will now be a more skilled player than Jim Davis in MTG, but it might create some extra trash talk in future Uno matches.

Uno is available on Xbox One, PlayStation 4, Switch, and PC.