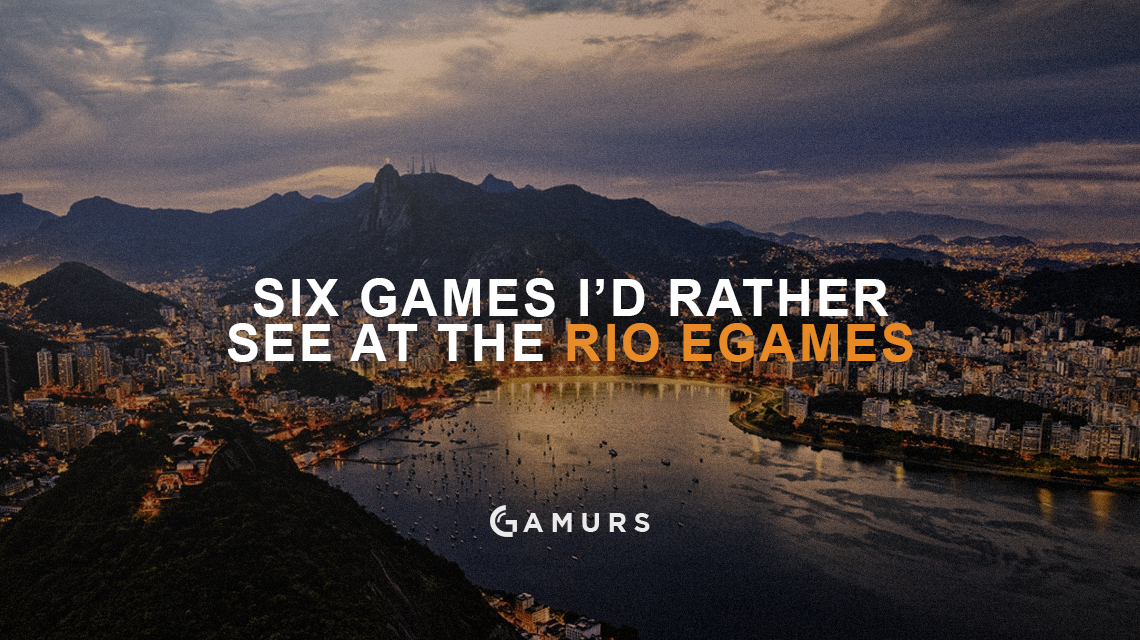 Right now, the Rio de JaneiroOlympics are underway and there is an exciting new venture beingdiscussed: the addition of esports.

Up until recently, a lot ofinformation about the eGames wasn’t out there for us to really knowwhat was going to go down. Today, the The International eGamesCommittee announced that the Rio de Janeiro eGames Showcase 2016would host SMITE on Aug. 15 and Super Smash Bros. on Aug. 16. Viewers will be able to watch bothdays courtesy of ESL. Players will not be competing for money, butfor nationalism and eGames medals.

Honestly, the announcement getsa judge’s score of five from me. I don’t even know ifthis event will be bronze tier in comparison to weekly events. Theconcept of the eGames is great, but it is all about theexecution.

For SMITE, it is a showmatch of Brazilian players. Therewill be no other countries playing in this game.

Now, this is an odd pick to me,because there aren’t many PC-based teams compared to othergames and furthermore there are six Brazilian teams accordingto EsportsWikis. Sure, this shouldmake the SMITE portion of the event fit within a day, but thatisn’t the only problem.

Even as someone who is workingwithin the esports scene, I rarely see anything going onwith SMITE. It just doesn’t have a huge esportsdraw at the moment when the scene is focused on games likeDOTA 2, Counter-Strike: GlobalOffensive,League ofLegends,Overwatch and more.

This game could have been pickeddue to it being easy to understand and the use of a variety of Godsfrom eight pantheons. However, I personally don’t see manyfrom outside of those in the esports scene watching the eGames, soI feel like that point could be irrelevant.

Super SmashBros. is a well-knowngame, so I can understand why it has been picked, but there arestill some problems. While the Smash community is huge, especiallywith tournaments like CEO and EVO, it just doesn’t have asmuch of a draw as other big games, similar to SMITE.

Fighting games are simple andeasy, but the mechanics still require skill. That is a bonus, butmost of the time, that doesn’t help viewer counts.

Four countries will haverepresentatives competing in this event. The players and countriesknown to be competiting are:

I have to admit, I believe thatSmash will have a higher interest for fans compared to SMITE. Theplayers selected are heavy hitters, as Ally is the reigning EVOchampion and Leo is a Smash Factor 5 winner. But compared to other esports,it has trouble obtaining and staying in the limelight, even thoughmany enjoy it.

Where is the representation?

It is a worldwide phenomena,too. The committee is leaving out some big countries, such asthose in Asia-Pacific, just because this is the first year of theeGames.

Yes, the eGames are only twodays long. However, since these events aren’t televised andare streamed on Twitch, the tournaments could be longer. There isactually a slight lull right now with major tournaments for premieresports.

Something I wanted to drawattention to was the amount of countries, 50, that have eGames-associated Twitteraccounts. I think thiswas one of the things that led some to believe there would be morecountries involved. I think those of the esports industry can seethe diversity other games have in respect to talent from variousnations in the Americas, Europe and Asia.

There are so many more optionsfor games that allow for other countries to compete. Manyprofessional players are even sporting their country’s flagas their player icons to show support. It’s not like theseguys don’t care about the Olympics.

Six games I’d rather see at the eGames

And so this brings me to the sixgames I would rather see in the eGames. Hopefully, the Olympicswill give esports another go at the Tokyo Olympics in 2020 andoffer a different selection of games that are guaranteed to gethuge audiences.

Before I give my list, I willsay that some of these games would perhaps not evoke a publicinterest outside of gamers. However, these games are still betterfor the Olympics in my eyes, but I will also add in why that gamemay not be in the interest of the spirit of thegames.

I feel as if these games wouldamp up the interest in the eGames, but let’s remember thatthe selection of these titles are just my opinion. Not to mention,there are so many countries that participate in these games. With abetter choice of games and the inclusion of more nations, which iswhat the Olympics are all about, it could bring prosperity to theeGames.

Hopefully, the eGames getsanother go at the Tokyo Olympics, but I fear for the event if thesegames do not draw enough attention.

What are your thoughts on thegame selection for the eGames? Let me know if you are excited tosee these games or what you would have picked to see for the gamingolympics. Make sure to give @GAMURScom afollow on Twitter to keep up with esports news andcoverage.