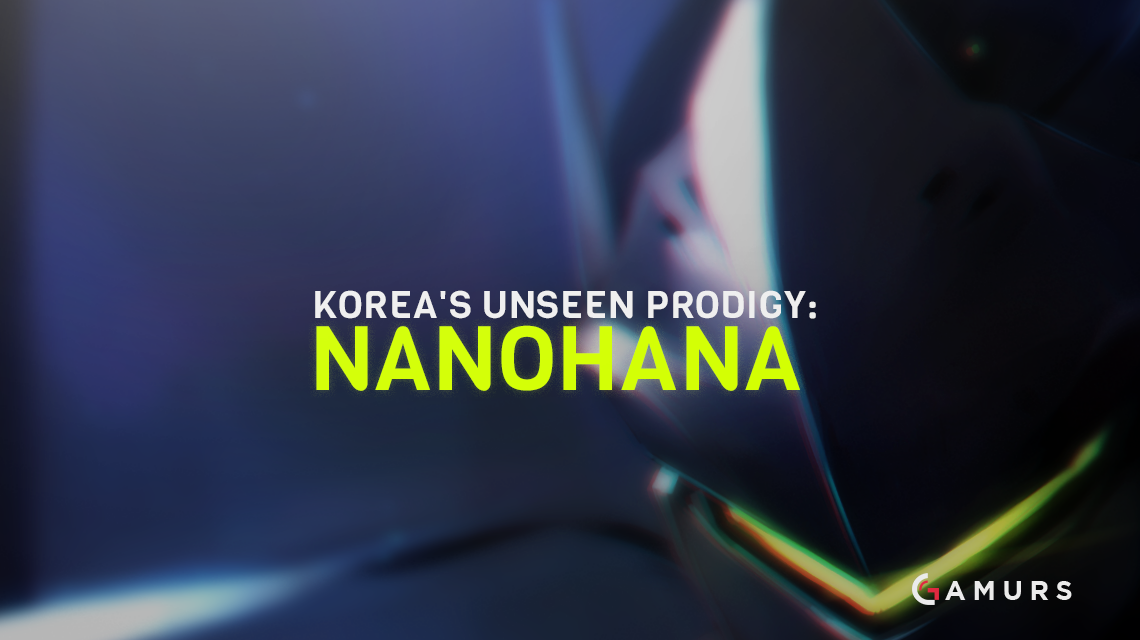 I have no doubts that most hardcore Overwatch esport fans are familiar with Nanohana. However, on the flip side, I’d wager many more casual or western fans only know Nanohana from IEM Gyeonggi. This is understandable, as it was his first premier tournament, but that does not mean his history within the game is already storied as they come.

Nanohana has had a turbulent path in professional Overwatch, and for much of it, he has been relatively hidden from the public eye. But now, it seems his time has come, and due to his prowess as a DPS player, it appears likely he can find his share of the spotlight.

The first time many of us can recall seeing Nanohana play was in the GosuGamers North American weekly #18. For Nanohana and the rest of LW Red, it was a tournament that began with facing their sister team LW Blue and ended with defeating Splyce. LW Red crushed the event, going 9-0 despite the ping they were playing with from Korea. This was in a much more Genji-friendly meta and Nanohana took full advantage of that. He shredded anyone in his way, displaying an obvious mastery of the hero, and in the finals against Splyce on Numbani, he even showcased a strong Pharah, leading his team to the title.

And thus, the story of Nanohana began. All of LW Red was thrust into the light and the public eye after their victory, especially the DPS duo of Pine and Nanohana. They went on to win the Overwatch Power League over Lunatic-Hai in a convincing 4-2. LW Red was regarded as one of the best teams in Korea and seemed like a shoo-in to qualify for OGN’s Apex league. But this was not to be the case.

During the offline qualifiers to make it into Apex, LW Red hit a wall. That wall was Haksal and his team Runaway. In the qualifiers, Runaway took down LW Red twice, which denied them entrance into the league. This was why Runaway entered Apex with as much hype around the roster as they did. However, the secondary effect was the first major stumble Nanohana’s story took, and it thrust him back into the darkness, hidden from the public eye.

Failing to qualify for the premier league, Nanohana was relegated to playing in the virtually unwatched challenger league in order to have a shot at season two of Apex. In challenger, he and LW Red were very successful, taking first in the first round, then second in the next round, making sure they would play in the promotion tournament. But before the chance at Apex season two came, Nanohana found his shot at redemption when LW Red was invited to IEM Gyeonggi.

Nanohana has played his entire career on LW Red. In fact, he is the only member of the roster to play in every tournament they took part in. With some sister team trickery, the LW Red roster that competed at IEM Gyeonggi was the LW Blue roster minus NoName, plus Nanohana. This meant that the only player playing for redemption was Nanohana, and he took his chance.

At IEM’s return to South Korea, Nanohana had a shot to showcase his talents to the world and he pulled the trigger. On stage and on stream to the world, he destroyed every team unfortunate enough to face him. On offense, he played Genji to round out his team’s dive compositions. On defense, he picked up Solider 76, often as the sole DPS. All the time, he was a monster carry force capable of pumping out huge amounts of damage. LW Red employed a meta countering dive style that Nanohana was critical to, as either the team fight closing Genji or the backline 76. IEM looked like a piece of cake for LW Red and Nanohana was back in the public spotlight as he led his team to an international title.

Just a few days after IEM, it was time for LW Red to qualify for season two of Apex. With their original roster back together, it was easy to once again assume LW Red was sure to qualify. However, this was a roster, that outside of Nanohana at IEM, had been unproven on the latest patch that included some major game changes.

Once again in their efforts to qualify for Apex, LW Red had to face Runaway. It was a devastating loss as Runaway defeated them 3-0 to put LW Red’s backs up against the wall. If LW Red was to lose even a single series in the rest of the event, they would be once again eliminated from contention for Apex. Nanohana and the rest of LW Red surged forward, crushing MVP Space in a 3-0 of their own. This left the fates of both LW Red and their last remaining challenger, Afreeca Red, in the hands of one final series.

Afreeca Red opened up the series swinging, sweeping LW Red on Lijiang and making a strong hold on Eichenwalde to take the first two maps. LW Red now had to win the next three maps without dropping a single one to qualify for Apex. In a nail-biting overtime, LW Red took Hanamura on their second offensive and crushed through Dorado, reaching the mark Afreeca left them with over three and a half minutes to spare.

The series, and the fate of both teams, was to be decided on Hollywood. LW Red attacked first to rather disappointing results. Barely managing to push the payload in front of Jail, Afreeca now had a serious shot at winning the map and denying LW Red entry into Apex. In the final fight, LW Red was desperately attempting to hold the payload, and tragically, Nanohana’s Mei ultimate found almost no value and Afreeca Red was able to close out the series 3-2 in their favor.

Once again, one of Korea’s star players was denied entry into Apex. Nanohana faced the prospects of playing another season in the darkness of challenger, missing out on the top tier of competition. But now, the rumor mill is swirling that Nanohana may find himself in Apex with some more sister team trickery from LW.

The latest rumors have Nanohana moving from LW Red to LW Blue to replace NoName. This time, instead of bringing LW Blue to Nanohana, like was the case at IEM, it seems like the organization will now be bringing Nanohana to LW Blue. This is a logical choice, as that roster already is a proven tournament winning team and would hopefully bring some life to LW Blue, who had rather underwhelming playoff results in Apex season one.

Removing Nanohana from LW Red would take away their strongest carry and potentially hamstring the roster. However, by the latest accounts, LW Red will cut everyone except Pine and enter a rebuilding phase. I’m in favor of this move, primarily because it is a talent consolidation move that gives LW the strongest possible roster, and this is a roster with the tools to win.

Strength Comes from Within

It feels incredibly lazy to come here and tell you that Nanohana, a DPS player, is a great player because his aim is strong. But there really is no way around it; his aim is fantastic. For a DPS player, aim is obviously important, but there are also two distinct types of aim. We have flick shooters, who snap between targets just moments before they shoot. This style makes for strong tap shooters or snipers, like Taimou on McCree or Widowmaker.

The style that Nanohana fits into is the tracking shooters. Instead of quickly snapping to targets, the tracking shooters trace smooth patterns to follow enemy movements. This style lends itself to being strong with rapid fire weapons, like Solider 76, or funnily enough, on Genji. You don’t see Genji players suddenly snapping around, instead, they track players on their screen, keeping their prey in view, especially with Dragonblade running.

But this isn’t to say that Nanohana is a one dimensional player who is just reliant on aim. He has demonstrated his ability to play a more cognitive role. On picks like Mei, he shows his understanding of chokepoint control with her zoning tools. His positioning is excellent on a couple fronts. When Nanohana picks up Solider 76 to play a backline role, he manages to stay alive and deal with the current tank-heavy compositions that are thrown his way. But when he swaps to Genji or Pharah, he places himself in positions to make plays with his ultimate and win fights almost alone for his team.

To cap it all off, Nanohana is versatile, which is a rarity among DPS players. He can play the dive heavy Genji, the projectile based Pharah, the blackline carry Soldier 76 or even McCree, the in-your-face Reaper, even the cognitive Mei; and he plays them all at a top level, which hits the crux of the issue. Nanohana is not just a strong player, but he specifically fits well into his rumored new home of LW Blue.

No I in Team

When we look at the differences between the LW Blue we saw in the Apex playoffs and the LW Red we saw at IEM, we can begin to understand why having Nanohana over NoName is so attractive. With Nanohana on the roster, there are now two legitimate carry threats instead of just Saebyeolbe attempting to carry. This means that the enemy team cannot focus down a single player as a reliable strategy anymore, which makes LW Blue a harder team to play against. That fact restricts the options available to their foes, while Nanohana’s presence gives LW Blue more options.

Nanohana’s versatility is key in giving LW Blue more options. With two potential carries, they can choose who to play around in any given match, and we know Nanohana can still thrive in a backline role. This means that the hypothetical LW Blue roster could play multiple styles, like we saw at IEM Gyeonggi. This hopefully gets them out of the rut they found themselves in during the Apex playoffs and gives us another top tier team.

I really do have my hopes up that the rumors are true. For a player this exciting to watch, it is a shame Nanohana wasn’t in the first season of Apex. For a player this skilled to be denied entrance into the second season of Apex would be tragic. I fully believe the move would be successful because Nanohana makes LW Blue a more versatile team and adds another threat to the roster.

Time will tell, but it’s about time Nanohana claims a more permanent place in the spotlight.

Do you think Nanohana will end up on LW Blue? Comment below or tweet your answer to us @GAMURScom or @GAMURS_OW