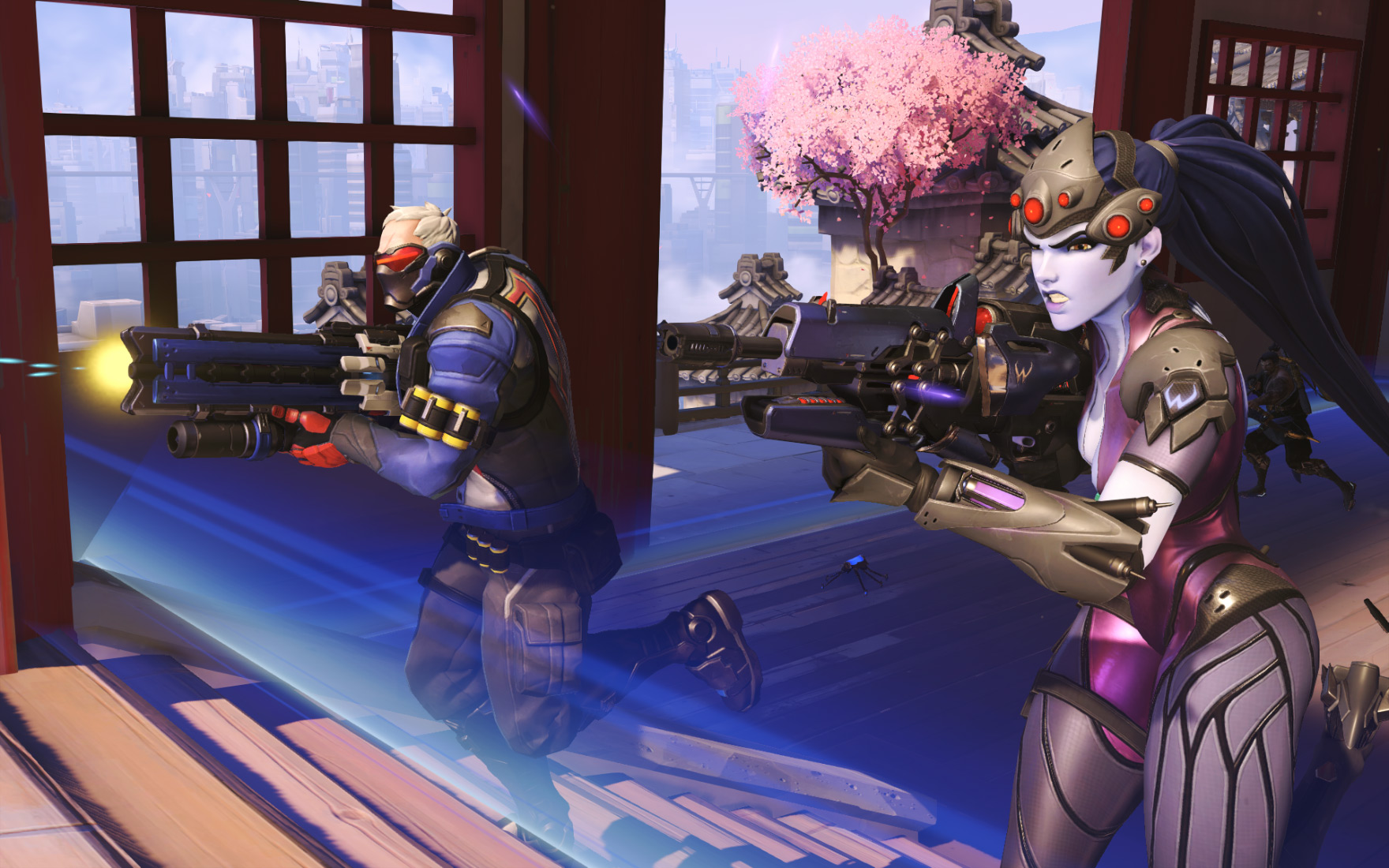 When the first season of OGN’s Overwatch APEX League concluded, EnVyUs, a European team, took the trophy. At the first LAN event where the West and South Korean teams clashed, the APAC premiere, a European team won—Rogue.

Western teams winning two major titles left an impression that, at the very least, the best team in the world wasn’t Korean. Yet.

After a devastating APEX season, where no Western team won a series against a playoffs team, the notion that South Korea is stronger is now an accepted fact. Pundits and fans have offered up many out-of-game explanations, from superior player attitudes and infrastructure to higher coaching standards. They’ve also offered explanations for in-game advantages, occasionally using vague phrases to say that some players are more skilled and teams more coordinated. I’m guilty of this myself. And now I intend to offer a more concrete theory.

A large reason why the South Korean teams are so strong is the depth of their rosters. All of the top eight Korean rosters have multiple damage threats, which makes choosing priority targets in a teamfight difficult. This developing group of elite secondary carry players has become a driving force behind Korean dominance.

The difference between a playmaker and a carry is the first key distinction. Playmakers are responsible for clutch engages, critical picks, or countering enemy ultimates. Ana sleeping the enemy Genji, Reinhardt knocking down five players with Earthshatter, or Lucio booping the enemy Soldier 76 off the high ground are all examples of playmaking.

Each one of these actions are capable of swinging a teamfight on their own even if they don’t actually kill anyone. Instead, these actions are focused on disrupting the enemy’s plans or setting up your allies to get kills.

For our purposes, a carry will be the player responsible for dealing damage within a teamfight. This means DPS players are classified as carrys. It’s not that tanks and supports can’t find kills of their own, but, simply put, they deal less damage than DPS heroes and make unreliable carrys.

The difference between a primary and secondary carry is also essential. Your primary carry is responsible for the bulk of the damage and fragging in teamfights and, as such, enjoys special protections.

These special protections can be Nano Boosts, Zarya shields, even Lucio ultimates or speed timed to enable them. These buffs represent a disproportionate percentage of a team’s resources given to a single player and place an equally offset responsibility for that player to carry a fight.

A secondary carry is also responsible for dealing damage but does not operate with the same amount of resources. Secondary carry players are still capable of massive impact, however, they must do so with less protections and buffs from allies. In general this makes them a less reliable win condition, as their roster hedges their bets on another player.

These groups are not exclusive. In fact, the best carrys, primary or secondary, will always blur the lines between playmaker and carry, outputting massive damage, hitting critical skills, and winning key duels against their counterparts.

In the shadow of Whoru

On a roster as stacked as Lunatic-Hai, it seems inevitable that Kim “Esca” In-Jae would gain less attention. He spent most of the season overshadowed by his DPS partner and primary carry Lee “Whoru” Seung Joon. Even his playmaking abilities were muted by those of Gong “Miro” Jin-hyuk and Ryu “Ryujehong” Je-hong.

It wasn’t until the semifinals against Meta Athena where Esca truly began to show off his skills again. The hyper-aggressive dive style that Lunatic-Hai plays on offense required Esca to move onto a full time Tracer role when the team was attacking.

As we see in this clip, Esca finds a flanking position where he can remove Kris from the fight instantly. Afterwards, he quickly uses Tracer’s mobility to head for the staircase behind Meta Athena to flank again where he then eliminates McCree while he channels his ultimate.

Both of these plays were executed without consuming any of his team’s resources, instead relying on creative positioning and his own skill. As if that wasn’t enough proof, later in the fight Ryujehong times his Transcendence to save Whoru’s Genji from death.

As Montecristo says in the clip, Lunatic-Hai with Esca now carrying his weight is terrifying. And as we saw in Lunatic-Hai’s victory over RunAway in the grand finals it took Esca stepping up in the final maps to push them over the edge.

Early in the series, Esca was regularly out-dueled by Stitch, but by map seven Esca was playing games with Stitch and crushing the Tracer matchup. In both the semifinals and finals of APEX, when Esca is on Lunatic-Hai he looks unstoppable. The additional threat on top of Whoru, Miro, and Ryujehong makes the team incredibly dynamic and nigh impossible to deal with.

During Meta Athena’s run in the challenger scene they went under the name The Meta. Quite ironic for a team that at the time played such an unconventional style. Instead of putting their Nano Boost onto a more traditional target such as Genji or Reinhardt, it always went onto Choi “Hoon” Jae Hoon, their star Zarya player.

This created an interesting situation where both of their DPS players were by our definition secondary carry players. But as the season progressed, Hoon played a more defensive role on D.Va allowing the DPS players more flexibility. And nobody in the world plays as flexibly as Kim “Libero” Hye Sung.

Given the chance, Libero will play anything from Genji to Mei or even the odd Sombra. Despite being a DPS player, his style is undeniably about setting up his team to succeed and not take the glory for himself.

From this incredible Sombra play to his now iconic Mei boosts Libero takes a back seat damage-wise. He allows the aggressive tank duo of Meta Athena and his DPS counterpart, Ha “Sayaplayer” Jeong Woo, to handle the bulk of the damage responsibilities.

Libero is the best example of a player in a traditional carry role who focuses on being a playmaker for his team—for much of his career his focus has been enabling Hoon to shine. He does not demand resources from his team and as such his personal damage numbers are lower. But his game impact is undeniable.

When I first wrote about Afreeca Blue’s secondary carry Jeong “Recry” Taek-hyun in October of last year I titled his section “Looking for Consistency.” Back then it was Jeong “Arhan” Weon-hyeop who was Afreeca Blue’s most consistent performer on his infamous Genji.

The joke was that Afreeca Blue threw everything onto Arhan when he had a Dragonblade ready and simply followed the bloody path he would cut for them. As we saw this season, that strategy wasn’t as reliable. Arhan began to consistently be overaggressive and get picked off despite the resources he was given. Suddenly Recry was the consistent one.

In this clip, we can see Arhan has received his team’s Nano Boost and fails to gain value from the ultimates used. After Dragonblade and Nano Boost have worn off, he once again looks to duel the enemy Soldier 76 only to be quickly blown up. Meanwhile, Recry is playing conservatively, staying alive, and dealing damage.

While Arhan is off consuming resources, Recry is playing in his own backline and helped peel for his supports in the fight. By not falling into the over aggressive trap that Arhan fell into, Recry has a high level of impact in the fight simply by keeping himself and his supports alive.

On most rosters, the secondary carry is less effective than the primary carry simply because they have less options available to them. But on Afreeca Blue the story is different. Recry, who does not receive Nano Boosts as regularly, still keeps his game impact higher than Arhan’s.

This has prompted many to wonder if Afreeca Blue should shift their focus onto Recry and instead allow him to be the primary carry. Regardless of the future, Recry’s ability to perform at such a high level from a secondary carry position makes Afreeca Blue a much larger threat than they would be otherwise.

Stop and smell the flowers

When asked who the best Korean DPS player is one of the most frequent answers you will receive is Hwang “Flow3r” Yeon-oh, formerly known as Nanohana. In terms of both versatility and pure skill, Flow3r is among the top in the world. For over half a year on both LW Red and LW Blue, Flow3r has been one of the most consistent carry players in the world.

When LW Blue wants to play dive, he gets to pick up Genji and be the center of attention. If LW Blue chooses to play a triple tank setup, he picks up McCree where he can dazzle us with his aim. And the player who then picks around him is Park “Saebyeolbe” Jong-ryeol.

Flow3r is undoubtedly the primary carry. He receives the Nano Boosts on Genji and McCree, and when he plays Pharah he often gets a pocket Mercy. Meanwhile Saebyolbe is left to play Tracer when the time calls for dive, and Roadhog for triple tank. Luckily, he is world class on those two picks.

During the playoffs, Flow3r’s performance took a dive for the first time in his career and he simply wasn’t fragging like he used to. Saebyeolbe tried to step into the void Flow3r left and did so magnificently. During their semifinal series with RunAway, Saebyeolbe died one less time than Flow3r, but picked up 18 extra kills.

Unfortunately, LW Blue only made it as far as the semifinals, but the playoffs were full of plays from Saebyeolbe’s Roadhog, as in the clip above. He quickly reacts to the Zarya hiding around the corner and negates her engage attempt. Losing their Zarya so quickly, Kongdoo Panthera backs up to the end of the streets phase, allowing LW Blue an uncontested push around the first bend.

Despite not having the same focus from his team, Saebyeolbe had arguably a much higher game impact than Flow3r did in the playoffs. How consistently he picked off his foes on Roadhog or harassed on Tracer added another dimension to LW Blue’s teamfights and made them that much tougher of an opponent.

Looking down the top eight Korean teams, the trend is clear. Every roster has a clearly defined primary carry who is backed up by a high-quality secondary carry. These secondary carry players are all unique in their approach, but they serve the same purpose.

They bring a significant amount of the damage to teamfights despite the lower amount of resources that are poured into them. In many instances the players must resort to playmaking in order to maintain the same level of game impact as their primary carry.