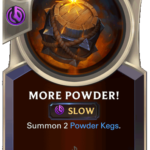 Bilgewater has officially arrived in Legends of Runeterra and its spells are packing quite a punch, dealing damage, and disrupting gameplay strategies.

Spells are an integral component in any LoR deck, able to capitalize upon spell mana while often providing game-changing outcomes. With the addition of the Bilgewater region via the new Rising Tides expansion, there’s a slew of unique spells just waiting to disrupt the meta. From Burst to Slow speed, here are the 10 best Bilgewater spells in LoR, ranked in descending order.

Burst spells are meant to be disruptive and Pilfered Goods delivers. The Bilgewater spell costs two to cast at Burst speed and allows a player to draw a card from the enemy deck. And if the enemy’s Nexus was damaged the turn it’s cast, you get to draw two instead. An ideal card to steal is an opponent’s champion. But the goal is disruption, and the icing on the cake is being able to use their own cards against them.

One-cost spells are valuable commodities, especially when they contribute towards leveling up a champion. Parrley is a one-cost Slow spell that deals one damage to anything (this includes an opponent’s Nexus). If dealt to a unit and the unit dies, Parrley also deals one damage to the Nexus as well.

Parrley is an ideal spell to cast early in a match, removing chump blockers and pinging an opponent’s Nexus, while also helping champions like Ezreal or Gangplank Level Up.

Will of Ionia was one of the most disruptive Fast spells during the LoR open beta. Strong-Arm is similar to “Sir William of Ionia,” in that it removes a follower from play. But instead of recalling the unit to the opponent’s hand, it places it in your hand. There are stipulations, however. Strong-Arm costs six mana to cast and is a Slow spell, not Fast like Will of Ionia. And it has Plunder, meaning you need to cast it after dealing damage to an opponent’s Nexus.

Ye Been Warned is a solid one-cost Slow spell that’s effective when cast prior to an attack. It gives an enemy unit the keyword Vulnerable, and if that unit should die in the same turn it was played, you get to draw a card. For one mana, removing a unit while drawing a card is a good deal, even at Slow speed.

Pick a Card is Twisted Fate’s champion spell and a sweet one, too. At Burst speed for the cost of three mana, shuffle a card into your deck and draw three Fleeting cards at the start of the next round. From the early game to late, Pick a Card has a ton of value. It supports Twisted Fate’s Level Up but it also increases tempo while giving you three cards for the price of one—for only three mana. Pick a Card also works with Fizz and even Heimerdinger.

Double Up is a solid Fast spell to include in a Miss Fortune build, especially once she levels up. But it holds its own in other archetypes too. At the cost of six mana, it deals two to an enemy unit, and if it should kill it, it deals an additional four to the opponent’s Nexus.

To put Double Up into perspective, Decimate is a five-cost Slow spell that deals four damage to an opponent’s Nexus. And it saw a good amount of gameplay in Aggro Burn decks during the LoR open beta. For one more mana, and at Fast speed, Double Up can not only hit the Nexus but remove an enemy unit from the battlefield too.

Adding power and defensive stats to a unit at the cost of three mana typically has a loophole to jump through, like Take Heart. Pocket Aces is a Burst speed spell that provides an ally +2/+1, permanently. And as an added bonus, when drawn, it costs one less to cast that round. Pocket Aces is a solid combat trick that sticks around, making it worth adding into a number of LoR archetypes.