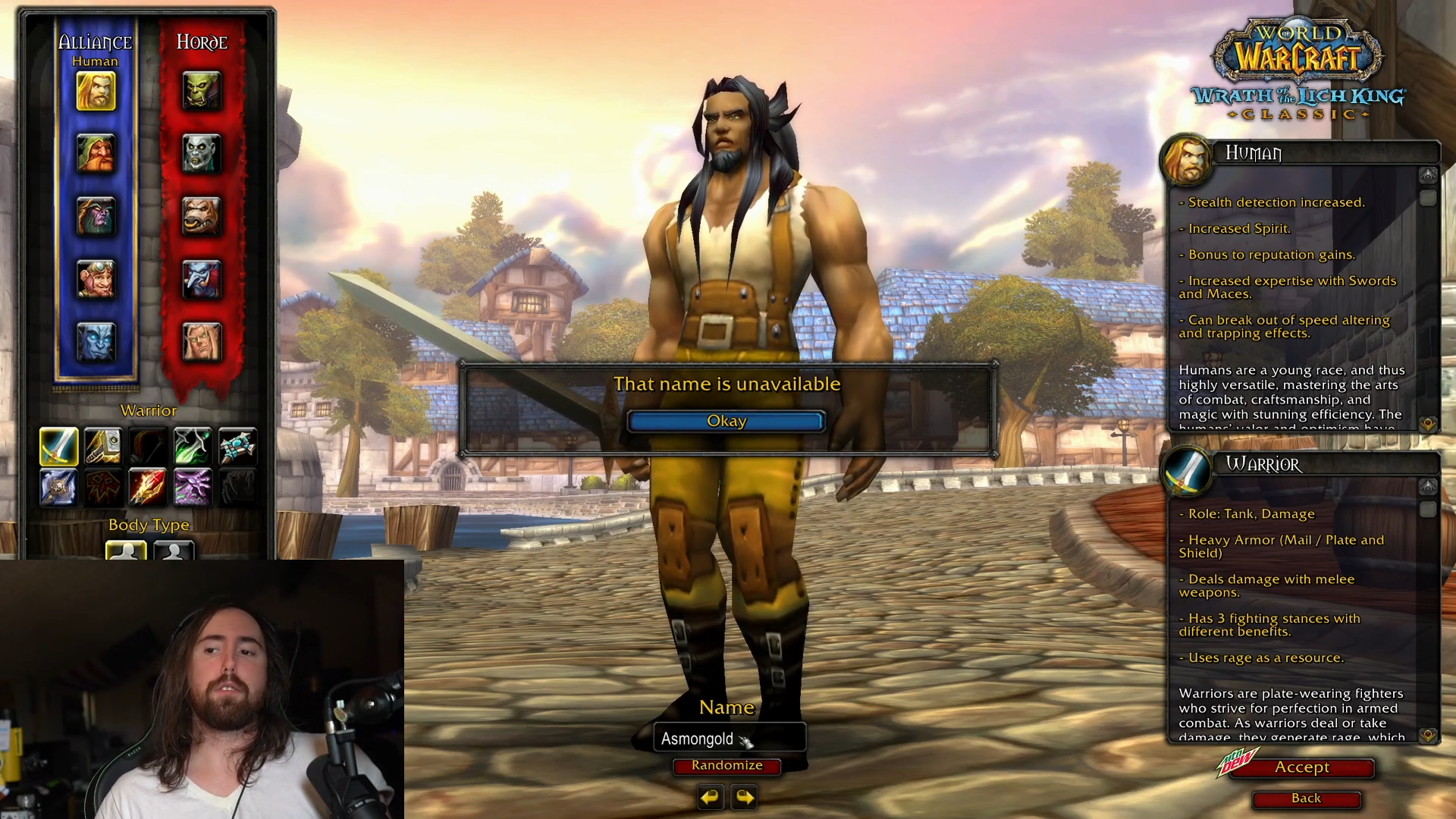 It’s a tale as old as online gaming. Trying to reserve your favorite gamer tag or name can be difficult, and for popular content creators, it can be nearly impossible, especially in games like World of Warcraft.

Yesterday, Asmongold spent a little bit of time on stream playing on the fresh World of Warcraft Classic servers that Blizzard create specifically for the pre-patch of the upcoming Wrath of the Lich King expansion. And just as everyone would have expected, a flurry of players went in to make a toon with all of his go-to character names.

Almost as if to play to his audience after making his character look the way he wanted, Asmon tried to name it “Asmongold,” knowing that someone likely had already taken the name.

Completely unsurprised that the name was unavailable, he tried “Asmon” to the same result, then “Zackrawrr,” then “Asmongler.”

“Wow, what a surprise,” he said sarcastically. “Damn, somebody’s really going out of their way.”

Typically, Asmon doesn’t take getting his name yoinked all that seriously. But yesterday, he expressed one particular concern that he has with his name being stolen so regularly.

Of course, he’d like to have his name for himself, knowing that just about anymore who reserves his name is only doing so merely to annoy him, but there’s another problem that pops up whenever people make toons with his name.

“I wish they would let me reserve one name because people do impersonate me,” he said. “And they scam people pretending to be me. I wish Blizzard would just make it to where you can’t have that name because that’s some bullshit.”

Asmon went on to say that he would rather no one be able to have his name at all than have people be able to take his name and give him a bad reputation by doing bad deeds while acting like they were him.

“I would rather that than somebody else get it and then scam people,” he said.

The popular MMO influencer eventually was able to lock in the name “Asmonfresh” for a Human Warrior on the PvP server Skyfury. The suffix “fresh,” of course, refers to the fact that Skyfury is one of a handful of fresh servers that Blizzard created for the WotLK Classic pre-patch.