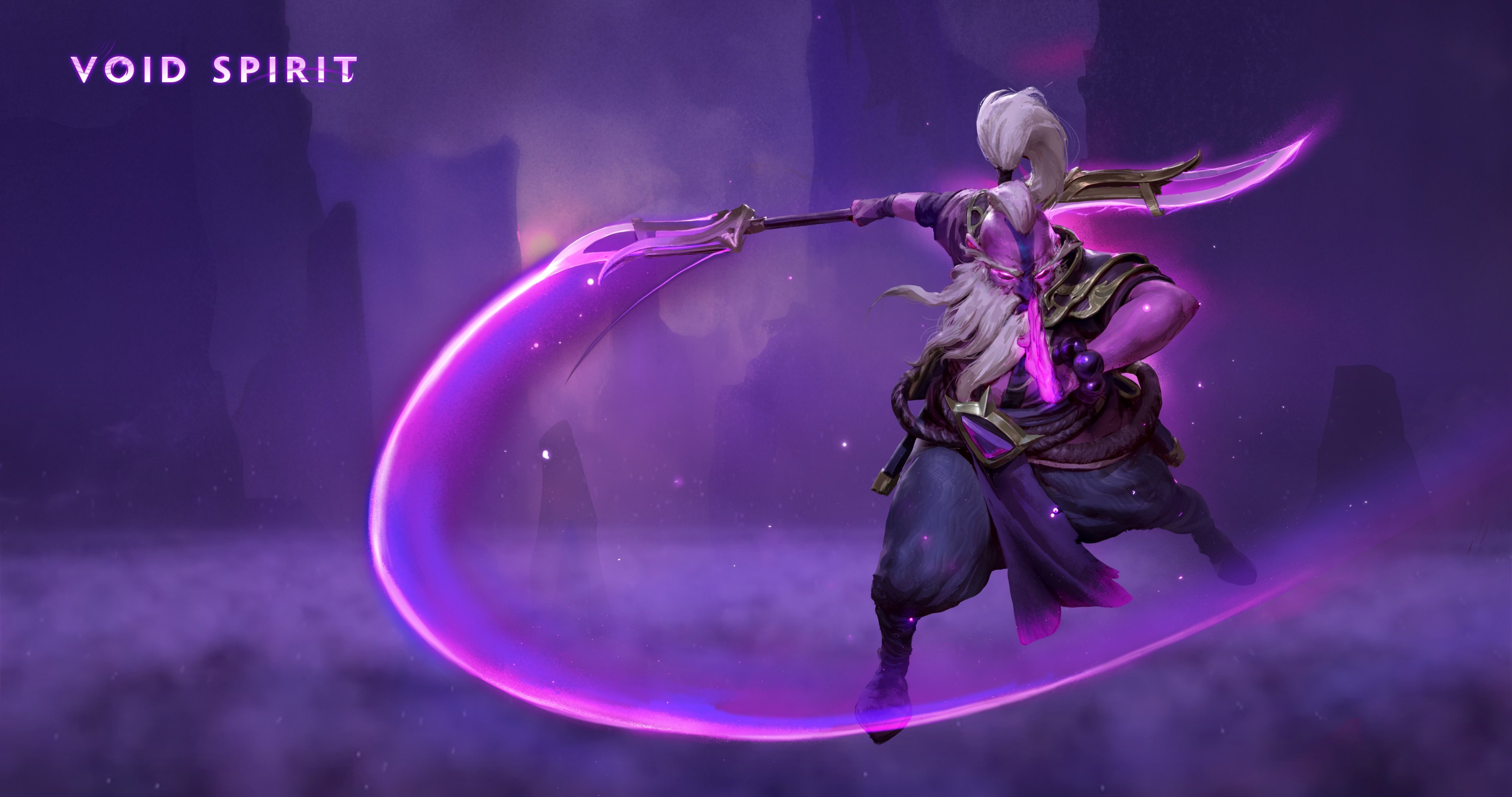 The huge Dota 2 Outlanders update introduced two new heroes, Snapfire and Void Spirit, at the end of November. They represent almost polar opposite playstyles and both can be bonkers in the right lineup.

Inai the Void Spirit is a high-skill cap and mobile hero that plays most akin to one of his spirit brethren, Xin, the Ember Spirit or the faerie dragon Puck. He’s mostly a spellcaster and crowd controller, especially when he hits his talent spikes.

Void Spirit’s array of abilities includes two mobility skills in Dissimilate [W] and Astral Step [R], both of which are also capable of dealing immense damage. Aether Remnant [Q] is a long-range disable that pulls enemies into him, while Resonant Pulse [E] serves double duty as an instant nuke and defensive mechanism.

He isn’t a physical carry, but there’s a lot of late-game potential

Void Spirit is being played in practically every lane due to his novelty, but he’s mostly seen as a core in the mid lane. He has a middling starting health pool, but a ridiculous base six armor more than makes up for it. Since he possesses the ninth-highest starting armor and his Resonant Pulse mitigates physical damage, which scales off the number of heroes hit, it makes him capable of winning almost every right-click trade in lane.

Void Spirit has four active spells. All of them deal magical damage and all of them have low cooldowns. This hero is a full-on brawler and should be one of the most active heroes in the game.

Inai mostly outputs magic damage and doesn’t do much physical damage. He isn’t a late-game hyper carry like a Spectre or Medusa, but a hero with this much mobility and playmaking potential will stay relevant no matter the stage of the game.

Like all magic damage carries, Black King Bars will certainly mess with the hero’s execution in fights. Unlike most magic damage carries, however, Void Spirit has a myriad of ways to kite enemies. And his low cooldowns ensure that he’ll be back in the thick of the fight sooner rather than later.

Dissimilate serves as both Void Spirit’s most damaging skill and a disjoint. It’s 1.3 seconds long and Inai can choose to come out of any portal, making prediction stuns a lot more difficult, unlike a Eul’s Scepter or Outworld Devourer’s Astral Imprisonment.

Astral Step also comes with two charges and is ridiculously cheap. Committing one charge and saving the other for any sticky situation is likely the optimal play in any situation. Astral Step functions as a pseudo-blink and it’s Void Spirit’s premier gap closer. It even slows targets. Therefore, it allows for players to easily chain it into an Aether Remnant or for teammates to follow up.

There’s a lot of interplay between each of Void Spirit’s four spells. Considering their low cooldowns, you’ll be constantly spamming your skills in every fight. But there are ways to get the most bang out of your buck.

Astral Step slows affected enemies, allowing you to easily set up an Aether Remnant. Use the long duration disable to easily set up a Dissimilate, allowing you to output tons of damage in the blink of an eye. When you hit level 25, a talent choice allows you to make Dissimilate a three-second stun, turning this combo into a crowd control dream with over five seconds of disables on one target.

Eul’s is one of the best items in the game for Void Spirit. It gives you mana regen, allowing you to skip your level 10 mana talent for damage to further augment your offensive capabilities. As an intelligence hero, it gives you damage along with an increased mana pool and movement speed for even more rotations around the map.

It’s also an extremely easy way to guarantee an Aether Remnant latch. Aether Remnant is a skill shot that has a cast delay and occupies an extremely narrow area. Eul’s Scepter removes the need for guesswork and you don’t even have to time it properly, like Lina’s Light Strike Array or Leshrac’s Split Earth.

Eul’s into Aether Remnant can always be avoided by magic immunity, however, unlike the other spells mentioned. Since it’s literally impossible to land a frame-perfect disable, there’s always a chance for the Cycloned hero to use an item like Black King Bar.

For a hero with this much mobility, Silence is death. And the dispel provided by Eul’s helps to further improve your survivability. All in all, Eul’s is one of the best items Void Spirit can purchase.

There are a lot of similarities with Ember Spirit

Void Spirit’s kit is most comparable to Ember Spirit but contains a few key differences. Void’s first skill, Aether Remnant, is a taunt disable that can force movement, while Ember’s Searing Chains roots two targets in place. Both skills are disrupted heavily by creeps and other units.

Void Spirit’s ultimate, Astral Step, is an instant straight-line physical hit that afflicts delayed magic damage. Ember Spirit’s ultimate, Fire Remnant, is a straight-line magical nuke that deals instant magic damage but requires a bit of time for the remnant to arrive at its targeted location. Both serve as an escape skill due to their ability to cross huge distances across all terrain.

Like Ember, however, Void Spirit is a serious test of player skill and proves to be an extremely slippery target on the battlefield. Void Spirit is definitely a fun hero to play and is even boasting one of the highest win rates in the game after Patch 7.23a’s buffs. The hero likely won’t remain untouched in terms of its numbers—he’s already been nerfed once in an unnamed, minor patch—but his core skill set and gameplay should remain similar.

Void Spirit is definitely a hero that benefits from sustained practicing and will certainly be one of the most fun heroes to watch when it enters Captain’s Mode.