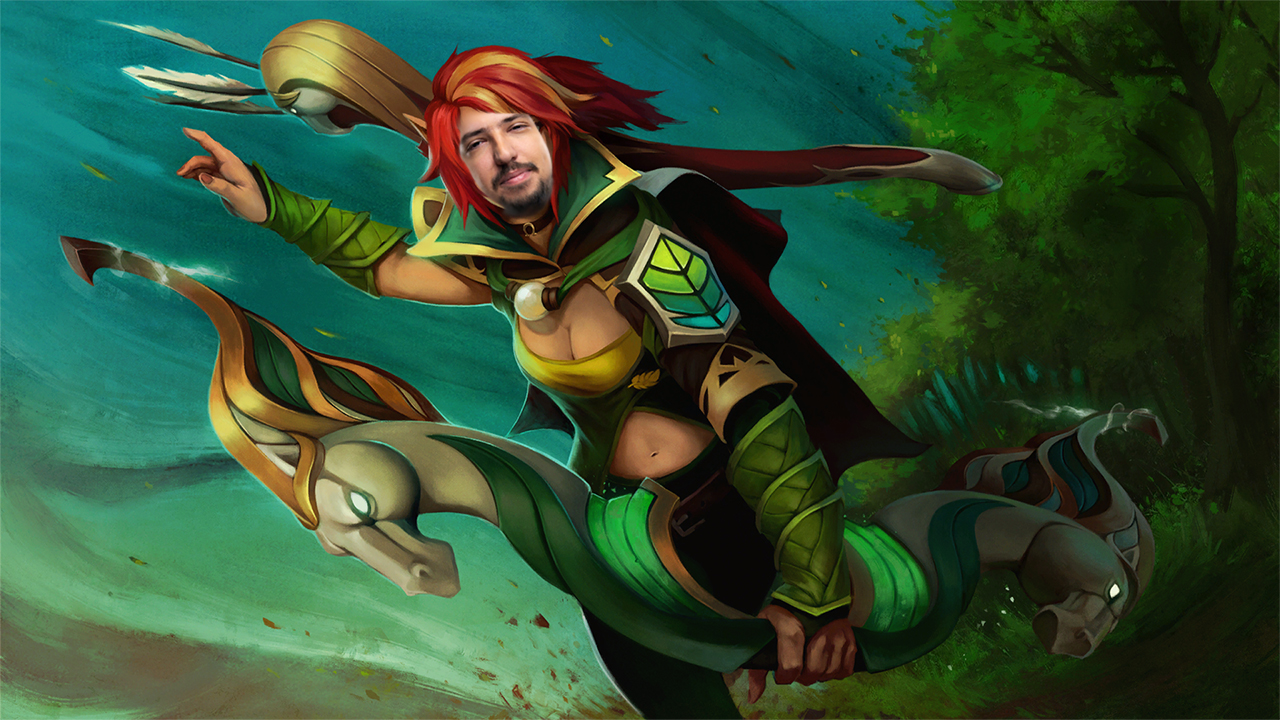 Images from Valve and Team Liquid, modified by Dexter Tan

In his first tournament with Liquid, the team came in second place at the Epicenter Major. But the main storyline was how w33 dominated on Windranger throughout the tournament. In fact, he played so well that he single-handedly caused an uptick in the hero’s cosmetic prices:

The hero’s kit features a long duration skillshot stun, painful line nuke, a defense mechanism that increases movement speed and provides 100 percent physical evasion, and an ultimate that tremendously boosts your physical damage. When played right, Windranger has free rein over the battlefield, constantly moving in and out of fights while dealing high amounts of hybrid damage. Being caught unaware, however, usually results in a quick death.

Liquid played Windranger as a powerful midlaner due to the hero’s laning prowess and capability to solo kill pretty much any hero in the game with minimal items, all while providing unparalleled utility by scouting and assisting skirmishes around the map.

Without further ado, here’s a guide on how to play like the w33ranger.

“Ooh, now I get to shoot stuff!”: Windranger’s skills

Here’s a brief explanation of each of Windranger’s skills and the priority they should be given.

Shackleshot [Q] is a ridiculously long skillshot stun, known mainly for its high skill cap and propensity for players caught by it to shout “HOW DID THAT LATCH???”

It’s a really long duration stun for a non-ultimate, and its potential to take out two heroes from the fight is great. It doesn’t do any damage, though, and already has a ridiculous two-second stun at level one, so w33 usually picks up a value point at level four and leaves the skill for last.

Powershot [W] is a high-damage nuke that reduces in damage as it passes through targets and requires suitable finesse to pull off just like its cousin Shackleshot. It has a ridiculous cast range of 2,600, which means you can literally snipe somebody from two screens away.

It deals 450 damage at level four, which is further increased to 575 with the level 15 talent. This is your top priority to max since it’s your main farming and killing skill in the early levels.

Windrun [E] is what helps you, well, run like the wind. It gives you additional movement speed, 100 percent physical evasion, and slows down enemies in an area around you, making this an amazing trading and chasing skill.

As your main defensive ability, this gets maxed second.

Focus Fire [R] is what really allows you to solo kill anybody in the game. It provides a massive boost of attack speed to one target while reducing your damage. Doesn’t sound like a worthy trade-off? Well, the caveat is that while it reduces your physical damage, it doesn’t reduce item proc effects like Javelin and Monkey King Bar (more on this later in the item build section).

Uniquely, you can use this skill to attack while moving, meaning you can constantly keep up with your opponent.

Powershot first lets you secure the ranged creep, which is extremely important since it gives you more gold and experience than a melee creep. If possible, harass your enemy at the same time.

W33 always saves a skill point at level two, investing only at level three. Depending on the lane’s kill potential, he’ll pump it into Shackleshot or Windrun. If you’re in doubt, however, Windrun is never a bad choice. It allows you to trade hits due to your physical evasion and gives movement speed to boot.

A value point in Shackleshot at level four sets up gank opportunities since it’s a pretty ridiculous two-second stun at level one. And since your opponent will constantly be around creep waves and trees in the mid lane, it’s very possible to land the skillshot.

The level 10 talent gives you mana regeneration, which is great considering all your skills are very low cooldown and make quite a dent into your mana pool. This allows you to spend less time and money regenerating mana.

The level 15 talent makes your Powershot even more ludicrous. The damage helps you clear waves faster, too. The attack range talent isn’t terrible, but considering how easily you catch up to people even without a Scepter, it’s just not really necessary.

The level 20 talent really opens up your scouting abilities and initiation potential. With two charges and the mana talent, you can literally scoot around the entire map, invisible the whole time. Shackleshot duration sounds good on paper, but it’s not entirely reliable, while Windrun is always good.

As if your cooldowns aren’t already short enough, the last talent just blows them wide open. This works for all your active items, too, which is absolutely ridiculous.

These items combined give you an additional 11 damage to start the game. Try to get two shared tangoes with Null Talismans and send out a Blades of Attack for even more damage, allowing you to trade hits effectively.

Send out Mangoes and Salves as needed to keep up aggressive posturing. Drop your Nulls before you use Mango for additional efficiency.

Phase Boots give you the most damage out of any boots option, and the six armor helps an intelligence hero like Windranger a lot. This gives you a mana-less option to chase your enemy down. Also, your Phase active brings you up to max movement speed with Windrun.

Magic Wand aids your survivability a lot, is cheap, and builds up with some pretty efficient items.

Javelin is the most efficient damage option for Focus Fire. For 1,100 gold, you’re getting an average of 25 damage increase per attack. Considering your attack speed, there simply isn’t anything else you can get as a source of damage for cheaper or faster. Keep this to upgrade to Monkey King Bar later on.

Black King Bar is pretty much a necessity, so much so that this is the first major item w33 buys. The magic immunity allows you to use Focus Fire uninterrupted and covers the major defensive weakness to magic that Windranger has.

When purchasing the components, be sure to lock your Javelin to prevent the Mithril Hammer from combining with it, turning into Maelstrom.

Remember how damage procs interact with your ultimate? Monkey King Bar is the best choice for single-target damage with Focus Fire. Plus, it only costs 3,075 gold to upgrade with your Javelin already in tow, making this an incredibly quick damage and power spike.

Aghanim’s Scepter gives you two charges to your Windrun, granting 100 percent uptime on the skill. It also unlocks your movement speed cap, allowing you to move even faster around fights. W33 picks this up in conjunction with the invisibility talent, thereby unlocking the full potential of the skill.

Crystalys is a cheap source of increased damage that synergizes well with all your raw damage items. There’s also great fun to be had to see red numbers constantly popping out over your enemy.

This can eventually be built into Daedalus for even more offense, too.

Boots of Travel give you the ability to teleport to friendly units, which means that you can be even more active around the map. The increased movement speed also lets you cosplay Sonic with Windrun. You can consider picking this up before Crystalys if you already have enough damage and need a way to assist allies around the map.

None of w33’s games went over 50 minutes, which means his item progression pretty much stopped at Crystalys. He never even got to upgrade to Daedalus throughout the Major.

But if you’re stuck in the super late game, you can either go for more defense in Linken’s Sphere, damage in Mjollnir, or control in Scythe of Vyse / Bloodthorn.

Windranger is all about speed, speed, and speed. It applies universally throughout her gameplay, item decisions, and fighting.

W33 builds cheap items to speed up the hero’s solo kill and pushing potential, giving her multiple ways to be effective around the map. Instead of building any farming items, w33 focuses on pushing the tempo constantly, not giving any opportunity for a reprieve.

By taking away the enemies’ breathing space, you’re providing your own team with space to safely move and farm around the map. In w33’s case, considering the fact that Liquid’s Amer “Miracle-” al-Barkawi is one of the best carries in the world, it’s probably not a bad gameplan.

During fights, use Windranger’s short cooldowns and maneuverability to speed around, lockdown key targets, and burst them down with either Focus Fire or Powershot. Windranger prefers the edges of a skirmish because this allows her to look for two-man Shackleshots and prevents putting her fragile body in the thick of it.

“Nothing like a little failure to sharpen your aim”

Windranger’s Shackleshot and Powershot are both narrow line skillshots. They require high mechanical skill and proper understanding of angles and hero movement to land correctly.

In the above clip, look at how w33 positions his hero. He’s constantly running around the edges, trying to abuse angles and fog of war to get off his spells. By using the trees to block lines of sight and reading how Sumail “SumaiL” Hassan was moving his Queen of Pain, he kicks off his contribution to the fight with a beautiful two-man shackle on two core heroes. He chases down SumaiL with Focus Fire and proceeds to just chill.

Still skirting the boundaries, he Powershots to try and snipe off low health targets. Despite not hitting a lot of them, see how many skills Windranger can get off in a fight. He gets off three Shackles and five Powershots. Even when he misses, he’s creating a buffer zone for his team to execute the teamfight freely since the supports can’t enter for fear of getting nuked for 450 damage.

He ends the fight with a beautiful Powershot to finish off the escaping Grimstroke. Combining an innate understanding of hero movement, his mechanical skill and sublime usage of his hero, w33 is a terrifying presence in each and every teamfight. Eventually, you just might be able to do what he does.

“No expiration date on this”

Windranger has been a consistent presence in the game for pretty much its entire lifespan. From the days of Dmitriy “LighTofHeaveN” Kupriyanov playing it offlane and rushing Force Staff to w33’s current playstyle, a lot of the core concepts and tenets of the hero haven’t changed.

While the numbers have been altered, Focus Fire has received several reworks and QOL changes. But Windranger consistently remains one of the most popular pub picks and weaves in and out of the professional meta.

Even as item builds and skill builds change (people used to skip Focus Fire until the last three levels because it was terrible), Windranger is a hero that everybody can learn and enjoy. With satisfying skillshots, high damage, and great utility, what’s not to like about the lovely ginger archer?