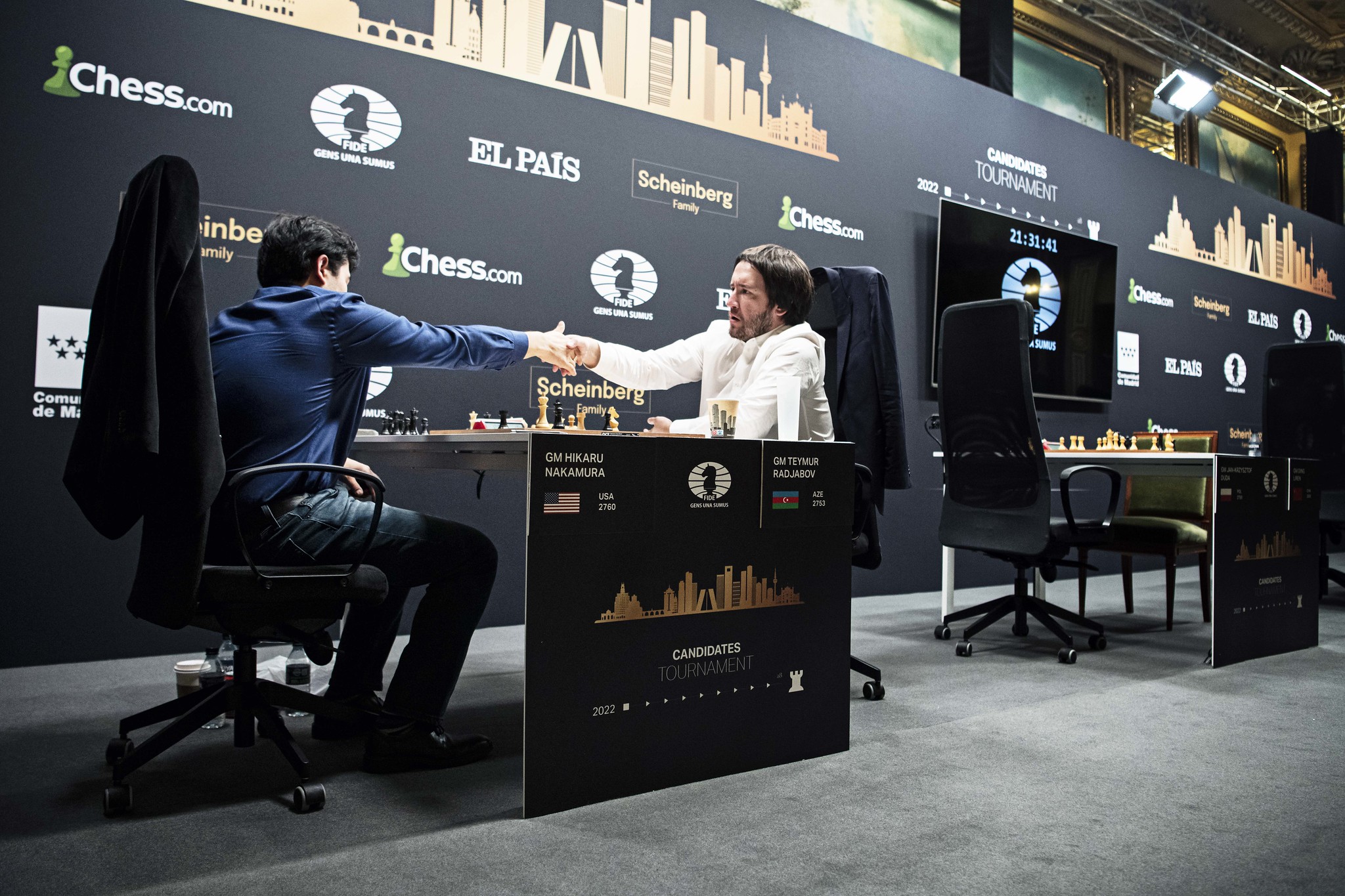 The early leaders ended up drawing from a sharp position, while Hikaru Nakamura made up for his day one loss with an impressive technical win over Teimour Radjabov. It was the only decisive game of the day, as Jan-Krzysztof Duda and Ding Liren split the points in their match, just like Richárd Rapport and Alireza Firouzja did over on the other boards.

Nepo and Caruana split the points

The two tournament leaders faced off against each other in a surprisingly sharp version of the Italian Game, one where Fabiano Caruana’s trademark superior opening preparation netted him a 55-minute lead on the clock by move 17. Though Ian Nepomniachtchi gave up a pawn (with a second to follow) and would have been slightly behind against perfect play, he had more than enough compensation against a human opponent in the form of an ominously looming attack on Caruana’s king.

Ultimately, both players got lost in the labyrinth of complications, and bailed out into a forced draw in the resulting time scramble instead of pushing for the win. The result will suit Caruana better, having scored 1.5/2 from two games with Black, but Nepo won’t be complaining either, with the same scoreline after facing the second- and fourth-ranked players in the world to start out his event.

After surviving an awful position in Round 1 and getting away with a draw, Rapport will be kicking himself for allowing the third-ranked player to do the same to him today. Just like yesterday, the players headed straight into a rare line of the Sicilian Defense, very similar to the position Rapport got tangled up in yesterday. The position was mostly even until move 30, but as Firouzja started to run out of time, errors began creeping into his play, and it seemed like Rapport would end up with an unassailable lead on the board by the time they’d reach time control.

It wasn’t to be. Rapport first let things slip on move 38, missing a winning continuation with the forcing move e6, instead opting for a quieter approach that allowed his opponent back into the game. Firouzja needed another bit of luck on move 52 after Re7 gave White an opportunity for a complicated, almost study-like attack. Kf5 would have led to a winning rook endgame for White after a long sequence of forced moves. Instead, the battle fizzled out into a draw on move 60, leaving both players alive to fight another day.

In what was by far the quietest game of the Candidates Tournament so far, Duda failed to pose any real problems with the White pieces. Going for the Italian Game, the players ended up with a much calmer position than Nepo and Caruana’s game, and the slow, strategical maneuvering typical of this opening led to a quick three-fold repetition on move 41 in a game that never really got going. After a shocking first-round defeat, Liren stopped the bleeding, and now has another game with the White pieces to look forward to in Round 3.

Nakamura bounces back with an impressive win over Radjabov

The only decisive game of the round came in the form of a seven-hour marathon between the two oldest players in the field. Neither Nakamura, 34, nor Radjabov, 36, are seen as likely winners at this event, but it’s already clear that both of them came to fight.

Once again, the Berlin Defense was on display in Nakamura’s game, but his in-depth preparation earned him a small-yet-tangible advantage by move 12. The position in question has only ever been played once before, in an online event between Nepomniachtchi and Levon Aronian, and Nakamura’s team found a small improvement on that continuation.

Qh5 on move 12 gave White good practical chances against a bishop pair, and a pawn advantage followed soon thereafter in what was still a complicated and defendable position. However, Radjabov got ground down by his time management again, with less than seven minutes to work with by move 33. He reached the time control on move 40 with just two seconds to spare, and by then, Nakamura already possessed a significant advantage.

Radjabov defended like a lion in what was still a very challenging endgame, and he did have some chances to save the game, but eventually, White’s queen-side pawn majority prevailed, allowing Nakamura to bounce back in style from his day 1 defeat and keep himself in contention.

Candidates Tournament 2022 – standings and round 3 matchups

The pre-tournament favorite and second-ranked player in the world, Liren’s lack of elite-level competitive play heading into this event showed itself in the first round. With three lockdown-filled years behind him, he hasn’t had many opportunities to play against top-tier opposition, and just like the last Candidates tournament, he had an awful start. Now, Rapport may be an obliging opponent after dropping the ball in Round 2 thanks to his tendency to get inside his own head. Regardless of the result, you can’t help but feel that whoever loses here will be completely out of contention, if only because of the mental factor.

With 1.5 points taken from two games with Black, Caruana is in an excellent position and great form. Duda, not so much. After such a promising position in Round 1 against Rapport, he never really found a way to get going against Ding Liren today, failing to convert either of his back-to-back games with White. Things are only going to get tougher from here, and this would be a great time to make a stand.

Radjabov hasn’t quite turned out to be the free win many predicted heading into the event, but he is clearly someone worth targeting with aggressive play due to his consistent time management issues. Nepo has already proven to be more than capable of pressing an advantage with the Black pieces even in this elite field, and another win would make him one of the favorites going into the first rest day.

Every game that involves Nakamura will have a significant amount of hype swirling around it. Facing the youngest player in the field with the Black pieces after a seven-hour marathon will be a huge challenge. After surviving a huge scare against Rapport in round 2, this is Firouzja’s best chance to secure a win in the first portion of the event and establish himself as one of the top contenders.