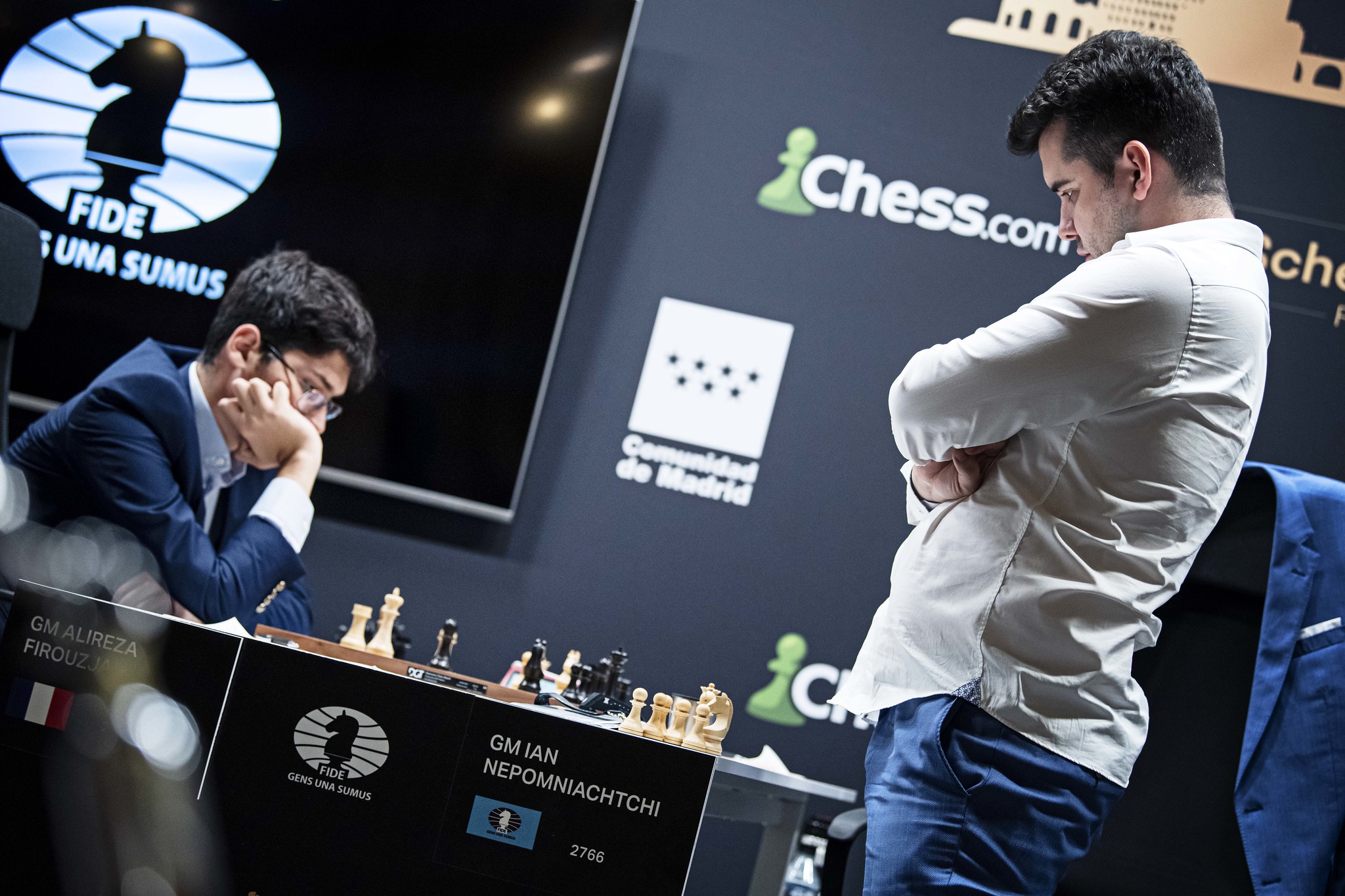 Russian grandmaster Ian Nepomniachtchi has been in incredible form throughout the 2022 FIDE Candidates Tournament, now on eight points out of 11 with three rounds to go in this chess event.

Still undefeated in the tournament, Nepo beat Alireza Firouzja with the Black pieces. Ding Liren ground down Fabiano Caruana in a seven-hour epic and an intensifying fight for second place.

There is nothing much to report about this particular game. Teimour Radjabov opted for a quiet opening, the players traded off most pieces soon thereafter and settled for a draw by move 33 after less than two hours of play.

No one could have predicted halfway through the tournament that this matchup would turn out to be a serious showdown for second place. As the stakes kept getting higher, Liren kept picking up steam as Caruana began to falter. Momentum was clearly on the Chinese player’s side heading into this game.

Cautious opening maneuvering in the Ruy Lopez denied Liren his preferred Marshall attack but he still found a way to seize the initiative by pushing the b-pawn down the board and sacrificing it for extra space. The position was filled with gunpowder. While Black was busy doing this on the queenside, White stacked up multiple pieces next to the enemy king on the other end of the board in a dangerous bid to set up an attack.

After the smoke cleared off by move 29, the players emerged bruised and battered into a position full of structural weaknesses and opposite-colored bishops. Caruana carved out some space with 29. f4 and his opponent made the dubious decision to release his stranglehold of the center. After slowly but surely building up an advantage in the emerging endgame, the position slipped out of his hands after a bout of time trouble. By move 60, when an additional 15 minutes were added to his clock (plus, finally, a 30-second increment per move), he lost the pride and joy of his position, the pawn that advanced all the way to e7.

Down a pawn and on the clock, now it was all about fighting for a draw. But Liren didn’t let up, pouncing on Caruana’s blunder on move 74 to crash into the White position and snatch the last pawn on the kingside, prompting the American’s resignation. This marks three wins in a row for Liren, two with the Black pieces, which is an incredible feat. If not for Nepo’s even more incredible feats, he’d now be a contender for winning the entire event, something that was almost unthinkable after his opening-round loss with the White pieces and everything that followed.

Nakamura pushes Rapport to the brink but the Hungarian holds firm

Having played the Taimanov Sicilian three times earlier in the event, Richárd Rapport sprung a surprise on Hikaru Nakamura by playing 3. – Nc6 instead. The players progressed down a mainline variation of this explosive opening, with Rapport ending up with a bishop pair and great activity at the cost of a pawn, a position the computer nevertheless deemed as equal.

Hikaru still pushed for complications, trading off his bishop and keeping up the knight to maintain faint chances of victory, grinding and grinding an even endgame to try and find chances, but to no avail. By move 59, the players reached a tablebase draw position, but Nakamura kept on trying until move 96 before settling for a draw. With this result, Nakamura slipped to third place, half a point behind Liren.

Here is Nakamura’s recap of the game:

Nepo crushes Firouzja to all but secure his tournament win

Firouzja is checked out—somewhat. He played 250 online bullet games against Daniel Naroditsky last night, staying up until 5:45am. Of course, everyone is at liberty to mess up their own tournament preparation (and sleep schedule), but the reason this is so controversial is that he was going up against the tournament leader with other players still trying to chase him down, essentially giving Nepo a free pass.

It was another Petroff, as expected. What wasn’t expected was Firouzja’s decision to start pushing the pawns in front of his king. 16. g4 was dubious, 17. h4 was bad, 18. g5 was nothing short of suicidal.

Nepo dismantled the sleepy Frenchman’s position with surgical precision, winning again before the move 40 mark was even reached. Though his victory isn’t mathematically confirmed just yet, in practical terms, it’s now almost impossible for anyone to catch up. Find another full point (or take two draws in three games) and Nepo is our winner. Firouzja, meanwhile, is stuck in last place.

Candidates Tournament 2022 – standings and round 12 matchups

With these results, Duda, Rapport, and Firouzja are officially out of the running. Ties are not decided by secondary scores or head-to-head results, but rather a tiebreaker mini-match played a day after the final match is concluded. This is why technically Radjabov has a mathematical chance of winning, even at this juncture.

The second half of the Candidates has not been kind to either of these players. A spectacular implosion by Caruana saw his score drop from +3 to even as he became more and more desperate to try and chase down Nepomniachtchi—so much so that now even what seemed like a nailed-on second-place finish has been jeopardized.

Even the biggest fans of the young Hungarian will concede that this has not been his tournament, but at least he hasn’t compromised on his style and approach. He and Caruana played an exciting and explosive game in round five and Rapport showed today against Nakamura that he isn’t going to just throw away draws aimlessly (or, come to think of it, “not again,” seeing how his second game against Nepomniachtchi went down…), which should lead to a fun game between these two again. Lest we forget, Caruana still has a second-place finish he’s gunning for.

The impossible has happened: Liren is now in second place at this event after an awful start—so much so, in fact, that the previous game between these two players, now a tussle between second and fifth, was a brawl at the very bottom of the standings. Liren had one good opportunity to win that one with the Black pieces as well, and having now somehow won back-to-back games going second, this game with White still serves as one of his best opportunities to take another full point home.

Now firmly rooted in fifth place, Radjabov has shown that he is no pushover in this field, even if he’s been extremely unambitious, especially with the White pieces. But it’s become clear that he shouldn’t be disrespected and any victory against him will have to come after a bloody battle. Unfortunately for the 35-year-old Azerbaijani player, that’s exactly how Liren has scored his spectacular victories in the previous rounds.

These two youngsters both had a Candidates experience that they would rather forget, but they’re clearly taking different approaches to rounding out a disappointing event. Duda is willing to take a quick and clear-cut draw when and if he’s offered one while Firouzja keeps on going for broke, with spectacular and often disastrous results.

Duda’s only win came at the expense of Caruana when the American pushed beyond what the position allowed for in a desperate bid to score a win with the Black pieces. If Firouzja does the same, the Polish grandmaster has shown that he is very much capable of taking advantage of it. But when it comes to taking the initiative, Duda’s been lacking so far. This would be a great time to flip the script and go on the offense, if only for pride’s sake.

This is it: Hikaru’s last stand. Lose this game and his chances of winning go from near-zero to zero. Both players have performed well so far at this event but it’s tough to overstate how ridiculously good Nepo has been. Five wins out of 11 games played at this level is simply obscene, with zero losses to boot. Nakamura is on +1 and has clearly proven that he still has what it takes to play at an elite level even in slower time controls (in a much better mental state than he’s been before), and he’s a great ambassador to the game. But he won’t be challenging Magnus Carlsen for the world championship title unless something incredible happens.

But what if there is no Carlsen? Should the champion abdicate, it’s the winner of this event versus the runner-up to find his successor. That is still very much possible for Nakamura, who is half a point behind Liren heading into this round. He was the only player so far who had a realistic chance of actually beating Nepo. It’s unclear if he will go for broke in a bid to snatch second place or if he treats this as a valuable half point and hunkers down for the final two rounds to try and get there.